An unusual job ad has been making headlines — crayfish peelers for diners who do not want to dirty their hands. And the job pays at least 150 yuan (US$22.25) a day, Beijing Youth Daily reported on Sunday.

“Can you peel crayfish fast? Can you resist the temptation of eating them after finishing peeling? Learn about the new job of crayfish peeling!” said a recent recruitment post by Alibaba's Hema Fresh Market on its official Weibo account.

Qualified applicants must pass a test — peeling 1.5 kilograms of the tasty crustaceans within half an hour. They must also have health certificates.

For at least four hours’ work a day on weekends, peelers can earn 150 to 200 yuan. The jobs are available until the season finishes at the end of September.

The store charges customers 10 yuan per 500 grams, topping out at 50 yuan.

Crayfish, or xiaolongxia, is a traditional Chinese favorite.

The seasonal craze runs from May to September every year. Gorging on crayfish with some bottles of iced beer is one of the pleasures of summer nights for many people, especially in central, eastern and northern China.

Last year, 1.7 million tons of crayfish were consumed, with Shanghai topping the list.

But many customers don't like to get their hands dirty and also want to use their mobile phones.

The rapid expansion of the crayfish industry sparked the idea of a peeling service in the major crayfish markets: Beijing, Shanghai, Wuhan and Changsha.

Some peelers are young white-collar workers.

“They take it as a part-time job because they have nothing to do after work,” the newspaper quoted a senior executive of Hema in Beijing as saying.

“For some people, they do it for fun rather than making money.” 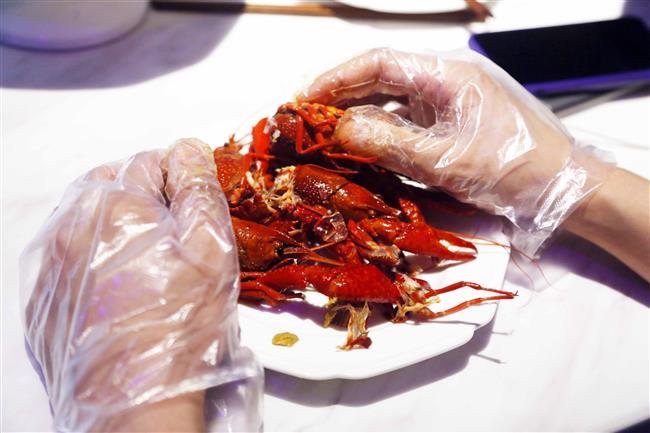 Using gloves, wearing a mask and holding the crayfish by the head, a peeler can do one in as little as 10 seconds, or about 20 minutes for 1.5 kilograms.

“The freshly cooked crayfish is too hot, otherwise it would be faster to peel them,” the article said.

“It is not very difficult to master the skills of peeling, they just have to endure hunger pangs and resist the temptation of eating them when peeling, usually at meal times.”

The idea of crayfish peeling for diners are not new in Shanghai, China Daily reported.

Last summer, a restaurant in the city drew public attention by employing two female university students to peel for customers.

They handled about 6 kilograms a day, each earning about 10,000 yuan a month.

The eatery added 15 percent to a table’s bill for the service.