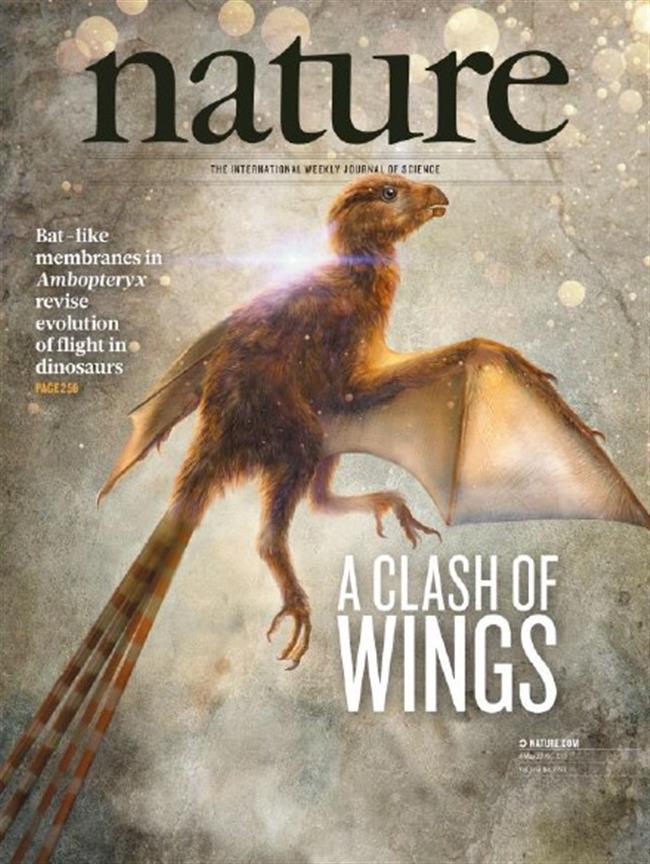 Chinese scientists have found the remains of a bizarre Jurassic dinosaur with membranous wings, showing a strange but unsuccessful attempt to fly in the evolution process from dinosaur to bird.

The well-preserved fossil, discovered from northeast China's Liaoning Province, dates back 163 million years and belongs to a new species of Jurassic non-avian theropod dinosaur with associated feathers and membranous tissues.

About 32 cm long and weighing about 306 grams, the new species has been named Ambopteryx longibrachium, meaning a mixture of a dinosaur and the membranous wings of the pterosaur.

The newly discovered dinosaur belongs to the enigmatic clade of the Scansoriopterygidae, one of the most bizarre groups of non-avian theropods, said Wang Min, a researcher at the Institute of Vertebrate Paleontology and Paleoanthropology of the Chinese Academy of Sciences.

In the evolution history of vertebrates, pterosaurs, birds and bats evolved different flight structures independently. Paleontologists have made much progress in the study of the origin of bird flight, thanks to a series of discoveries of fossils of feathered dinosaurs and early birds.

But the finding of the Scansoriopterygidae was quite a surprise.

Unlike other flying dinosaurs, namely birds, Amboptery and Yi qi had membranous wings supported by a rod-like wrist bone that is not found in any other dinosaur, but is present in pterosaurs and today's flying squirrels, said Wang.

Due to the incomplete preservation in the only known fossil specimen of Yi qi, paleontologists were not sure about the veracity of these structures and their exact function.

As the most completely preserved Scansoriopterygid specimen to date, Ambopteryx preserves membranous wings and the styliform element, indicating the widespread existence of these wing structures in the Scansoriopterygidae, said Wang.

"We presume that Ambopteryx could glide between trees but could not fly very far," Wang said.

Based on the gastric calculus and some suspected undigested bones in the stomach of the dinosaur, scientists inferred the creature was omnivorous.

Wang and his colleagues analyzed and compared the bone structure of the membranous wings and feathered wings, and how the evolution of these two significantly different flight strategies affected the overall forelimb structure.

"So far, all known Scansoriopterygids are from the Late Jurassic. This unique membranous wing structure did not survive into the Cretaceous. This suggests that this wing structure represents a short-lived and unsuccessful experimentation with volant behavior," said Wang.

The research was published as a cover story in the latest issue of the academic journal Nature.