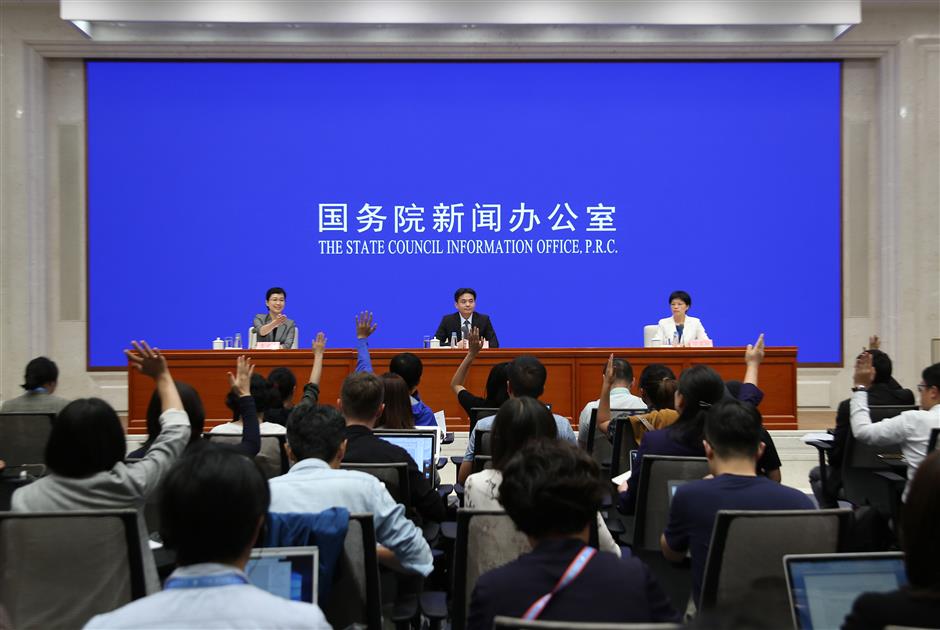 The Hong Kong and Macao Affairs Office of the State Council holds a press conference in Beijing about the current situation in Hong Kong on Monday afternoon.

A central government spokesperson on Monday called on people in Hong Kong to take a clear-cut stand to oppose and resist violence.

Yang Guang, spokesperson for the Hong Kong and Macao Affairs Office of the State Council, made the appeal at a press conference held in Beijing.

The development in the situation in Hong Kong, especially the violent acts of a small number of radicals, has severely damaged Hong Kong's overall situation of prosperity and stability, severely challenged Hong Kong's rule of law and social order, severely threatened the safety of Hong Kong residents' life and property, crossed the bottom line of the "one country, two systems," which are absolutely intolerable, Yang said.

Noting that no civilized society ruled by law can tolerate the prevalence of violence, Yang said he hopes that Hong Kong residents can see clearly the seriousness of the current situation, denounce the evil deeds and crimes committed by the radicals and stop their misdeeds damaging Hong Kong.

The rule of law is a core value which the people of Hong Kong take pride in, the foundation of Hong Kong's sound business environment, and an important cornerstone for the region to maintain its prosperity and stability, said Yang.

"We cannot just sit by and watch a small group of people recklessly trample on the rule of law," he said, noting that once the backbone of rule of law was shaken, the prosperity and stability of Hong Kong would be in jeopardy.

"The central government firmly supports Chief Executive Carrie Lam leading the Hong Kong Special Administrative Region government in the law-based governance, supports the Hong Kong police in their strict law enforcement, supports relevant departments of the SAR government and judicial organs in punishing the violent criminals in accordance with the law, and supports the people who love both our country and Hong Kong in their action to defend the rule of law in the region," said Yang.

Noting that development is the right path for solving problems in Hong Kong,Yang stressed that if the disorder persists, the entire society of Hong Kong will have to "cover the cost."

The central government is willing to make joint efforts with the HKSAR government and society in creating a sound environment for the development of the young people, Yang said.

He said the HKSAR police have approved and protected, in accordance with the law, peaceful protests related to amending the Fugitive Offenders Ordinance and the Mutual Legal Assistance in Criminal Matters Ordinance.

However, Yang said, the intentional violent activities by some radical protesters since June 12 went far beyond peaceful demonstrations.

Yang said the protests and violent incidents have lasted for over a month in Hong Kong, severely damaging the rule of law, social order, the economy, people's livelihoods and image of Hong Kong.

"It is heartbreaking for those who love and care about Hong Kong," said Yang.

Yang said that with the full support of the central government and the mainland, and under the leadership of Chief Executive Carrie Lam and the Hong Kong Special Administrative Region government, Hong Kong compatriots are surely able to govern, develop and manage Hong Kong well.

"Hong Kong will surely overcome all difficulties and challenges on its way forward," Yang said.

The central government will continue to unswervingly implement the principle of "one country, two systems" and ensure that this principle remains unchanged and is not bent or distorted in practice, Yang said.

"This is our unshakable position," Yang stressed.

Some people in the West have made "irresponsible" comments and have played a "disgraceful" role during the recent protests and violent incidents in Hong Kong, Yang said.

These people follow an absurd and ridiculous logic that violent and illegal actions should be sympathized with, understood or even tolerated, while police actions to maintain public security and rule of law in Hong Kong should be criticized, blamed or called to account, he added.

Their attempt will not succeed, he said.