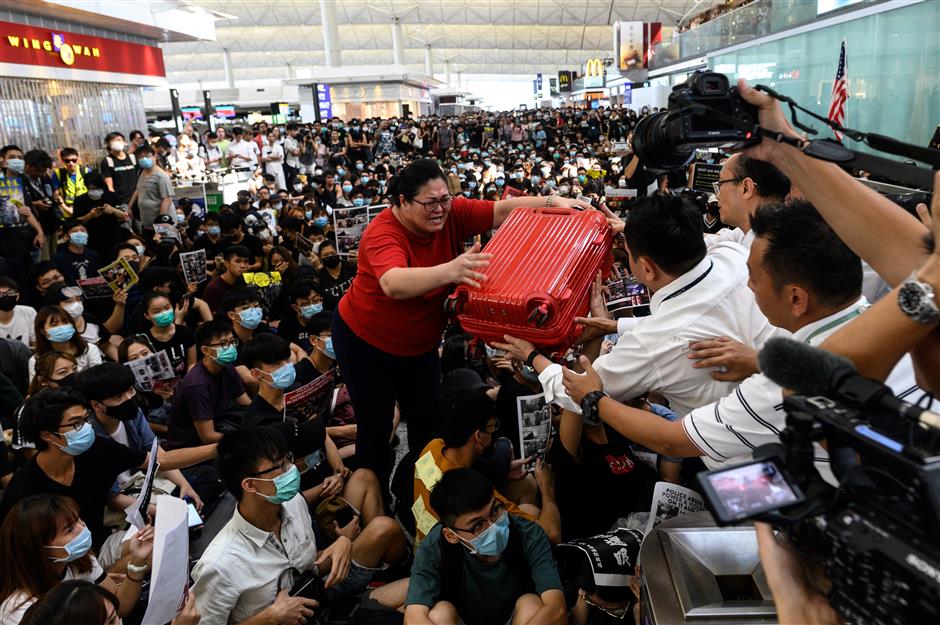 A tourist gives her luggage to security guards as she tries to enter the departure gate during another round of demonstration by protesters at Hong Kong’s International Airport on Tuesday.

Flights leaving Hong Kong were disrupted for a second day on Tuesday, plunging the city deeper into turmoil as its stock market fell to a seven-month low, and its leader said it had been pushed into a state of “panic and chaos.”

Ten weeks of increasingly violent clashes between police and protesters have roiled the Asian financial hub. Check-in operations were suspended at 4.30pm Tuesday, a day after an unprecedented airport shutdown, as thousands of black-clad protesters jammed the terminal, chanting, singing and waving banners.

“Take a minute to look at our city, our home,” Chief Executive Carrie Lam said, her voice cracking, at a news conference in the government headquarters complex, which is fortified behind 1.8-meter-high water-filled barricades. “Can we bear to push it into the abyss and see it smashed to pieces?”

At the airport, thousands of protesters gathered in the arrivals hall, as well as some parts of departures, using luggage trolleys to blockade the doors to customs checkpoints.

A visitor was assaulted and besieged by a large group of protestors at the airport. He needed medical attention but the protestors obstructed the ambulance officers from rendering medical assistance.

The police stressed it was not a dispersal operation and only wanted to escort the visitor safely to the hospital.

Lam said the most urgent task was to stop violence and safeguard the rule of law.

Vandalism spread during the past week, with railways and cross-harbor tunnels blocked, the airport paralyzed, and police stations besieged in various districts, affecting daily lives of ordinary people, Lam said.

Lam said some people, in the name of freedom or justice, have in fact been committing vandalism and damaging the rule of law, throwing Hong Kong into a state of panic.

The chief executive expressed anger at the attacks on law enforcement agencies and even their families.

If violence persists, it will take a long time to restore the openness, freedom, inclusiveness and economic stability in Hong Kong, and the stable lives of seven million residents can not continue, Lam said.

“The only thing we need to do now is to resist violence, maintain the rule of law and restore social order. Only when all calms down, will genuine dialogue, fixing the rift and restoring social harmony begin,” Lam said.

“My responsibility goes beyond this particular range of protest,” she said, adding that violence had pushed the territory into a state of panic and chaos.

As she spoke, the benchmark Hang Seng index sank to a seven-month low. It shed more than 2 percent, dragging down markets across Asia.

At the airport, some passengers challenged protesters over the delays as tempers began to fray, while the demonstrators, using a Chinese term of encouragement, chanted, “Hong Kong people — add oil!”

Other Chinese airlines have offered passengers wanting to avoid Hong Kong a free switch to nearby destinations, such as Guangzhou, Macau, Shenzhen or Zhuhai, with the disruption sending shares in Shenzhen Airport surging.

About 10 Chinese carriers released statements, allowing refunds of tickets purchased on or before Monday.

In a statement Tuesday, Air China said it canceled 14 flights Tuesday and Wednesday, and more flights are likely to be affected. The flag carrier has increased its capacity between Beijing and the southern city of Shenzhen.

Spring Airlines, the nation’s largest budget carrier, and Sichuan Airlines said the rules would apply to discounted tickets that usually allow no refund or change.