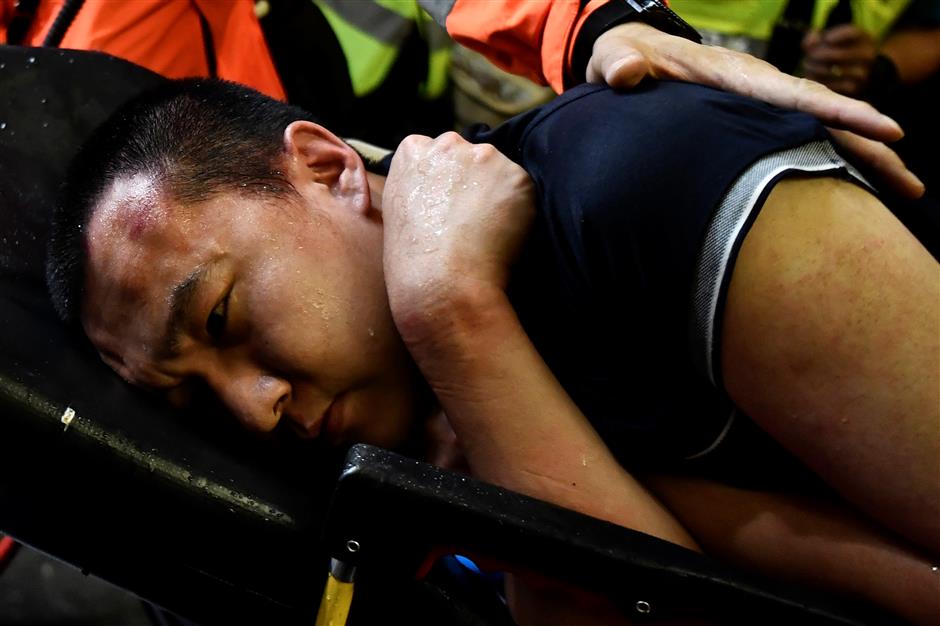 The injured reporter is taken away by paramedics at Hong Kong’s international airport, early on August 14, 2019.

The government of China's Hong Kong Special Administrative Region on Wednesday severely condemned the violent acts of protesters against a traveler and a reporter at the airport.

On Tuesday evening, some violent protesters besieged and assaulted a traveler and a reporter at the Hong Kong International Airport, as well as obstructed an ambulance crew from taking the traveler to hospital, said a spokesperson for the HKSAR government.

Fu Guohao, reporter of Global Times website, was attacked by rioters at the Hong Kong airport while he was performing reporting tasks, Global Times reported.

Radical protesters at the airport beat and tied him up, claiming that he took photos of them, according to Global Times.

Rioters told other reporters in the terminal that they searched Fu's bag and found a T-shirt with a banner saying, "I love Hong Kong Police," so they attacked him, the report said.

Fu was seen rolling on the ground with bruises on his body and his head bleeding, according to Global Times.

First aid personnel arrived to give medical attention to Fu, who had almost passed out while surrounded by the protesters for about 20 minutes. Rioters also tried to obstruct first-aid personnel from helping Fu at the airport, according to the report.

The HKSAR government "severely condemns these violent acts, which are outrageous and have overstepped the bottom line of a civilized society," said the spokesperson.

In a statement, the police also severely condemned the "radical and violent" acts of the protestors that had inflicted "physical and mental harm" on the two victims.

The police said an in-depth investigation will be conducted, vowing to bring the assailants to justice.

In the incident, police have arrested five people for offenses including unlawful assembly, possession of offensive weapons, assaulting police officers and breaching of the peace. 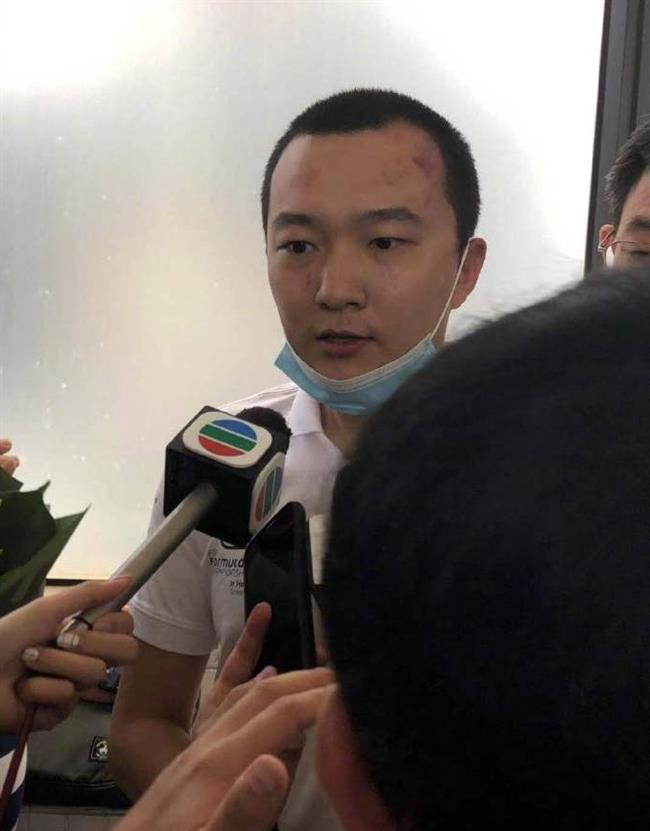 Posts condemning the Hong Kong rioters as terrorists and wishing the reporter well have flooded WeChat moment and Sina Weibo. Fu's full name "Fu Guohao" also became one of the hottest topics on the Sina Weibo after the incident happened, Global Times said.

"This is the moment people can clearly see the brutal nature of the radical protesters. Protecting Hong Kong must start with strict punishment of the rioters," said a Sina Weibo user.

After he was tied by rioters, a large number of Chinese mainland netizens praised Fu, applauding him for being a real man of iron.

"I support Hong Kong police, you can beat me now," Fu said while he was surrounded by protesters with his hands tied, after that he was kicked and beaten before passing out, according to Global Times.

Fu showed the courage of a decent Chinese man, said Mei Xinyu, a research fellow with the Chinese Academy of International Trade and Economic Cooperation under the Ministry of Commerce, the report said.

For such a great country as ours, the youth thugs are nothing. The most important thing is that the society should face up to the reality as soon as possible. In particular, it should build consensus and take actions to restore order, Mei noted, reported by Global Times.