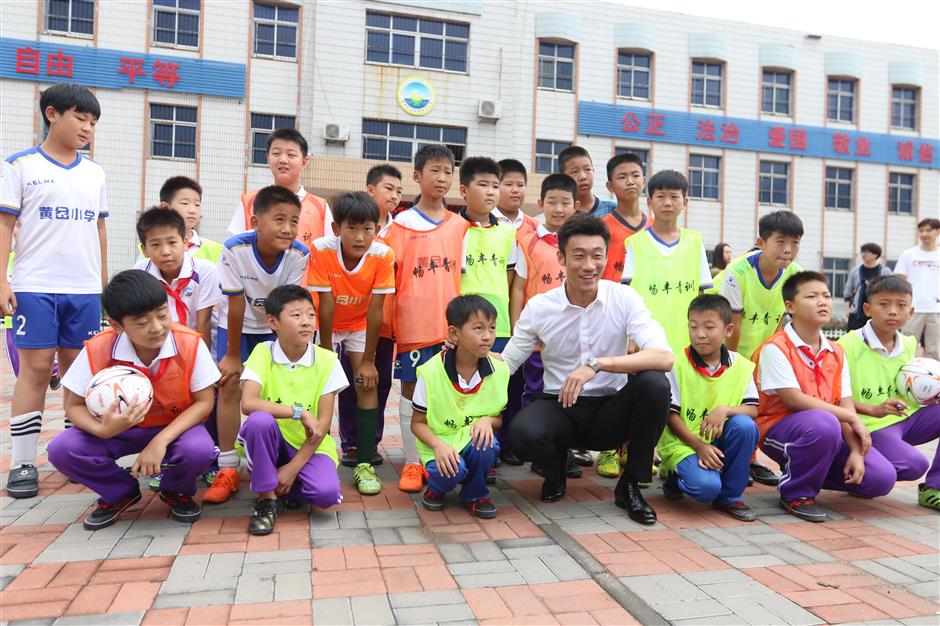 Chinese Super League club Tianjin Tianhai player Zhang Lu pose for a group photo with students at a primary school, where its unsurfaced playground will be transformed into a standard football stadium soon  in Tianjin on Tuesday.

More and more Chinese athletes are getting involved in charity work to help children in impoverished regions have equal access to sports resources.

Zhang Lu, 31, captain of Chinese Super League club Tianjin Tianhai and project sponsor of a sports charity organization, is among them.

The new stadium is expected to put into use in a month, and his team will continue to guarantee field maintenance and provide other support, according to an agreement signed on Tuesday.

Wang Guanghui, principal of the school, said pupils love playing football, but it's hard for the school to teach football as a core course due to limited resources.

"Zhang helped us to solve the biggest problem, so the children's football dream can come true on the new field," Wang said.

Many people living in big cities think a standard football field is common to a school, but in fact, lots of schools in remote and impoverished areas have been constrained by a lack of football infrastructure, according to Zhang.

"Children may get injured when playing football on the unsurfaced ground. Some parents have to ban this activity for the sake of their children's health," Zhang said, adding that the new field gave more children opportunities to improve their skills and inject life into the future of Chinese football.

In the past four years, Zhang has been teaching football classes and donating sporting goods and daily necessities for 16 Chinese schools in remote areas. He plans to build two to three football fields every year for more schools in Tianjin, Liaoning and other parts of China.

Meanwhile, Zhang never forgets his responsibility as a captain of a football team. "In recent games, our team performs well, which motivates me to do more for the children who love football, and in turn, the sports charity inspired me to achieve better performances in the following games," Zhang said.

Zhang is not alone in his endeavors.

Feng Xiaoting, a defender with Guangzhou Evergrande, organized a charity game for teenagers from China's Xinjiang Uyghur Autonomous Region in 2016, and also established a football foundation for building football fields and providing football facilities for teenagers in remote areas.

Chinese club Shanghai SIPG was paired with a primary school in eastern China's province of Anhui. Two professional players came to the school and offered football lessons and outdoor training for the children.

Zhang Yuning, a forward with Beijing Guoan, brought a group of pupils from Beijing to his training base to let them experience the charm of football on site.

In addition to football players, many athletes in other fields have also participated in sports charity work.

Hui Ruoqi, former captain of the Chinese volleyball team, has worked to build sports facilities for many colleges and provided more professional guidance for kids to help them understand the game of volleyball.

Wang Nan, a former Olympic champion in women's table tennis, has spearheaded a charity activity for four years, which donates sports equipment valued at 100,000 yuan (US$14,243) to over 50 rural schools and trained more than 150 volunteers and teachers to engage in PE education.

Zhang wants to play a role in leading more people and athletes to join him. "I hope that football culture will become a means of creating positive energy to help realize the Chinese dream," he said.