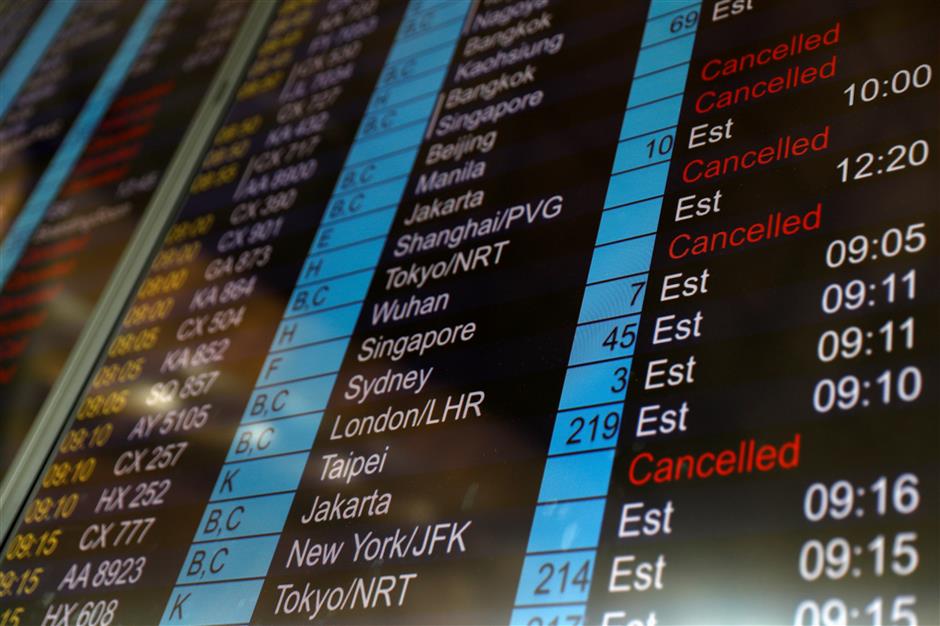 A view of the flight information board as the airport reopened a day after flights were halted due to a protest, at Hong Kong International Airport, China August 13, 2019.

The Airport Authority Hong Kong started on Wednesday to implement new security measures at terminals of Hong Kong International Airport after nearly 1,000 flights were canceled during the past few days due to illegal assembly.

The airport authority strongly condemns the violent incidents at the airport on Tuesday, and the recent assemblies had seriously impacted the operation of the airport and threatened the security of both passengers and airport staff, Chief Executive Officer at Airport Authority Hong Kong Fred Lam said at an inter-departmental press conference held by the Hong Kong Special Administrative Region (HKSAR) government.

A total of 979 flights have been canceled since Friday. On Tuesday alone, 421 flights, or over 30 percent of the airport's daily total, were canceled, and the number of passengers decreased by about 40 percent, according to Lam.

"If this situation continues, it will not only affect the travel of large numbers of passengers, but also severely hit Hong Kong's aviation industry," he said, adding that to ensure the airport's smooth operation and aviation safety, checkpoints were set up Wednesday afternoon at different parts of the terminals to implement the new security measures.

Only airport staff and departing passengers with flight tickets or boarding passes for the coming 24 hours and valid travel documents are allowed into the terminals.

The airport authority said earlier Wednesday that it had obtained an interim injunction to restrain persons from unlawfully and willfully obstructing or interfering with the proper use of Hong Kong International Airport.

Frank Chan, secretary for transport and housing of the HKSAR government, called on participants of the assemblies to comply with the injunction and leave as soon as possible.

The recent assemblies at the airport have damaged Hong Kong's reputation as an international aviation hub, as well as its tourism, trade and logistics sectors, Chan said at the press conference.

"We must say no to violence," he said. "Only after violence stops can Hong Kong move forward."

Edward Yau, secretary for commerce and economic development of the HKSAR government, said at the press conference that the violent incidents at the airport had not only greatly harmed Hong Kong's international reputation as a peaceful, rational and hospitable city, but also caused damage to its economy.

"I once again appeal to the public to express their demands in a peaceful and orderly manner and return to reason so as to end the recent violence and avoid further negative impact on people's livelihood and Hong Kong's economy," he said.