Thousands of overseas Chinese, students in London chorus 'Save Hong Kong' from violence 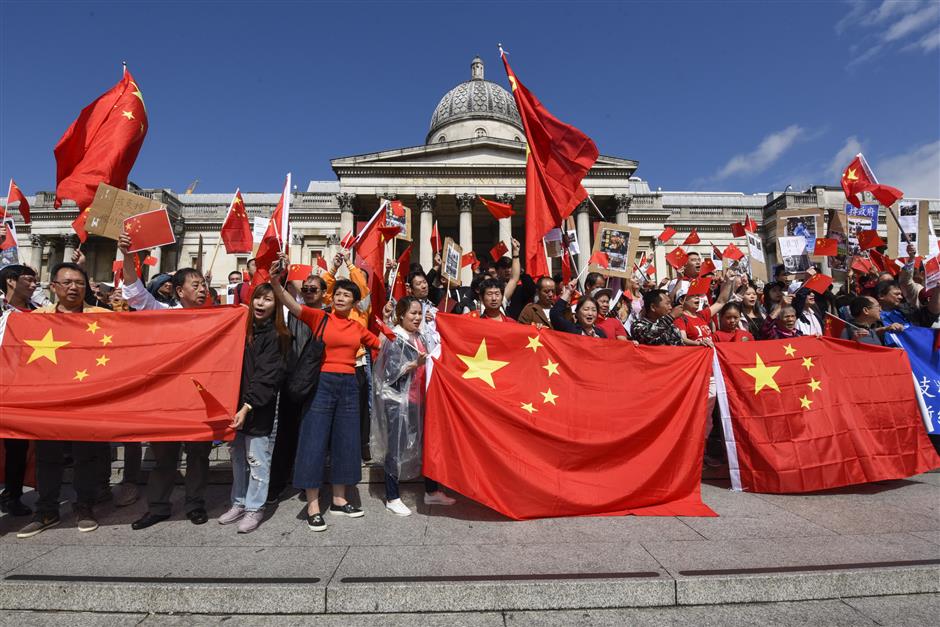 It was raining heavily in London on Sunday noon, yet for thousands of overseas Chinese and Chinese students attending a rally to voice out their demand for peace and stability in Hong Kong, such bad weather would never sink their passions.

"I love Hong Kong, I love China," "One China," chanted the crowd in Mandarin, Cantonese and English while holding placards written with slogans including "Stop Violence" and "Save Hong Kong."

The weather cleared when participants of the peaceful rally, young and old, arrived at Trafalgar Square. They sang "I Love You, China," "My Chinese Heart" and "Pearl of the Orient" among many other Chinese songs to show their backing for solidarity and unity.

"We want to take today's opportunity to express our dissatisfaction with 'Hong Kong independence' and violence," said Zhang Yanqian, a student from Kingston University who participated in the rally.

"We speak the same language and keep the same blood. We should unite and make the motherland prosperous and strong," he said, voicing their hope to show their patriotism through the rally.

The CSSAUK has called on Chinese students studying in Britain to remain restraint, calm, and rationally patriotic on the premise of ensuring their own safety, Zhang said.

The rally, co-hosted by the London Chinatown Chinese Association, the Hong Kong New Territories Heung Yee Kuk Overseas Liaison Office and more than 100 overseas Chinese communities in Britain, lasted for about an hour.

The rally was to refute the lies of the "Hong Kong independence" organizations, to tell the outside world that Hong Kong is a democratic and free society, to express support for the HKSAR government, and to oppose the violent protests over the past two months, said Chu Ting Tang, chairman of the London Chinatown Chinese Association.

For overseas Chinese Seuisang Gong, Sunday's rally was a good chance to show his support for the HKSAR government and Hong Kong police to investigate the criminal responsibility of the rioters.

The HKSAR government and Hong Kong police should "unite and work together" to "implement the law and deal with all illegal things in accordance with the law," Gong said.