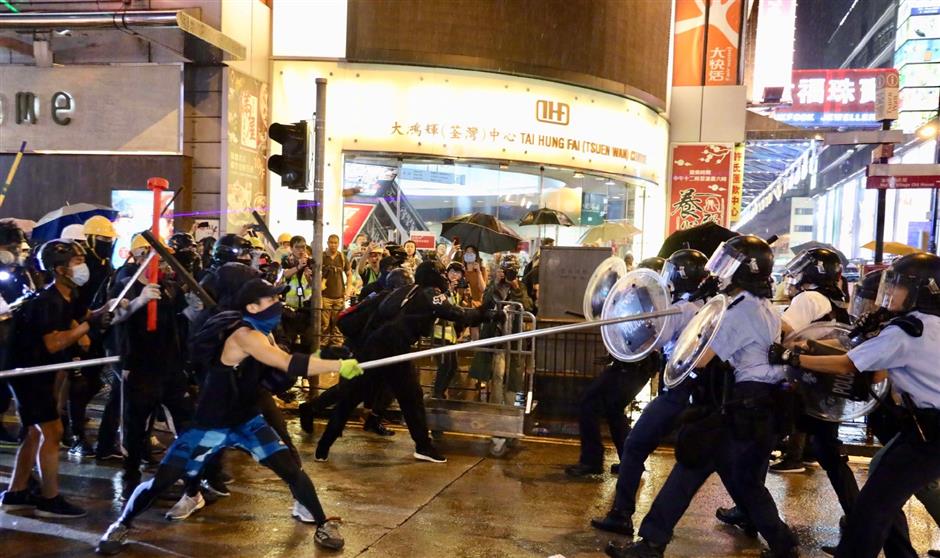 Though they call themselves "the valiant" without any "backstage support," plans or organization, the truth behind the rioters remains difficult to conceal.

A video released by the New York Times disclosed a secret warehouse and hideout for radical protesters, who have been causing tremendous mayhem in Hong Kong for the third straight month.

The video showed a group of young people gathering in a hotel, part of an underground network of safe houses. They said protests were like playing Grand Theft Auto video games and were "fun," and they looked forward to the police taking action.

In the clip, a masked female protester said, "The next person to die could be one of us. ... Everyone has to shoulder the responsibility."

The clip also showed protesters included a group of students under the age of 18, whose parents did not know they were involved. "Some tell us they would die for this movement," a journalist narrated in the video.

One protester talked about buying masks and glasses, but in fact, the protesters have used far more offensive weapons including sling shots, laser beams and petrol bombs to attack police and innocent civilians.

Sources said 500 to 1,000 radical protesters possess a strong tendency for violence, while some are advocating more violent acts in the future, including plans to sabotage power stations in Hong Kong.

Radical protesters are relying heavily on anonymous messaging apps like Telegram for orchestrating and coordinating attacks against the police, a tactic that has been used by terrorists to plot and carry out terror attacks in other parts of the world in recent years.

Those protesters share manuals on how to make petrol bombs and how to frame the anti-rioting law enforcement by police on online forums and social media.

The "manual on fighting," which has been widely circulated among rioters, elaborates "pre-war preparations," "personal training," "battleground response" and "information about arrests," with details on protective gear, weak points of the police and countermeasures, and how to respond before and after arrests.

"Being the valiant is a meaningful make-or-break gamble for us," said the manual.

Over the past two months, nearly 900 people involved in violent incidents have been arrested.

On multiple occasions, radical protestors took down roadside railings to form barricades long before police arrived. A large number of deadly petrol bombs have been used.

Lately, HKlastword has been trending on Twitter and it is full of agitating messages and hate speech against police officers. One reads: "If we burn, you burn with us."

Local online forums like lihkg.com and hkgolden.com are also full of calls for more violence this week.

One post on lihkg.com reads: "Laam-Tsao (die together) will prevail!", referring to a Cantonese slogan rioters are widely using to mobilize suicide bomber-style sentiment online and street violence in Hong Kong.

Another post on the website even taught rioters violent tactics for besieging police stations: "We should use more locks on the steel gates of police stations to prevent them from getting out. When they try to unlock the gate, we can kill them with whatever we find."

"When confronting the police, we should intensively attack their feet to prevent them from chasing us," it added.

Such instigative posts remained unchecked on social media day after day, while other radicals advocated the bullying of police officers' children in schools.

Alvin Tai Kin-fai, assistant principal of the Hong Kong Chinese Christian Churches Union Logos Academy, wrote on his Facebook page that he hopes children of the policemen who "used violence" will die before they turn 7 years old, or die before 20 if they are already older than 7.

Escalating violence has become a paramount issue and actions should be taken to stop them, members of the Hong Kong public have said.

In a statement published in local media this month, Peter Woo, senior counsel of The Wharf (Holdings) Limited, appealed to protesters to stop violence, citing the definition of terrorism in the Oxford Dictionary's online version — "the unlawful act of violence and intimidation, especially against civilians, in the pursuit of political aims."