Chief Executive of China's Hong Kong Special Administrative Region Carrie Lam said on Tuesday that she had never tendered a resignation to the central government.

"I said on several occasions previously and also reaffirmed by my colleagues in the Chief Executive Office in response to media inquiry, that throughout this period, that is from the very beginning till now, I have never, I have never tendered a resignation to the central government," Lam said at a regular press conference.

"I have not even contemplated to discuss a resignation to the central government," she said.

Stressing that the choice of not resigning was her "own choice," Lam said that though it might be "an easy choice to leave," it had remained her position that she and her team should stay on to serve the people of Hong Kong and help Hong Kong in a difficult situation.

"I know it is not going to be an easy path, and that is why I said that I've not given myself the choice to take an easier path, that is to leave," said Lam.

"I'd rather stay on and walk this path together with my team and the people of Hong Kong," she added.

In the face of escalating violence in Hong Kong, the majority of Hong Kong people and the HKSAR government share the priority "to stop the violence and restore calm in the Hong Kong society," said Lam. 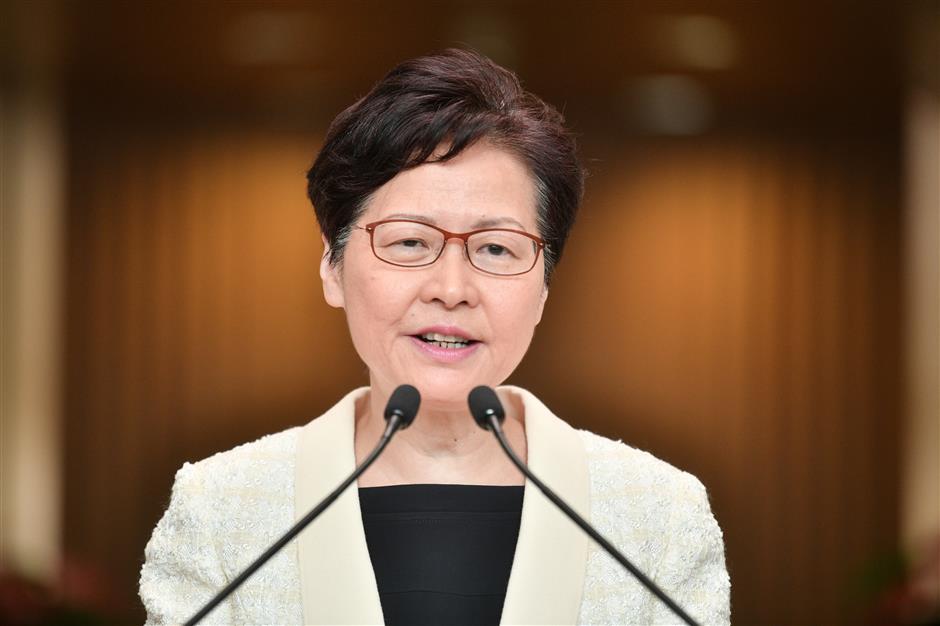 Hong Kong Chief Executive Carrie Lam speaks to the media during her weekly press conference in Hong Kong on September 3, 2019.

To achieve the goal, the rule of law must be upheld to handle illegal acts, said Lam, adding that dialogue with all walks of life in Hong Kong, especially with the young generation, is the best way to change the antagonism within the Hong Kong society.

"We have already proposed to build a dialogue platform with the public," said Lam. "I pledge that not only myself but all secretaries of the departments of the HKSAR government will go into the community next and communicate with the Hong Kong people."

On Tuesday, Lam also attended a ceremony by the HKSAR government at the City Hall Memorial Garden to commemorate the 74th anniversary of the victory in the Chinese People's War of Resistance Against Japanese Aggression.

Tung Chee-hwa, vice chairman of the National Committee of the Chinese People's Political Consultative Conference, among other officials and representatives, also attended the ceremony.