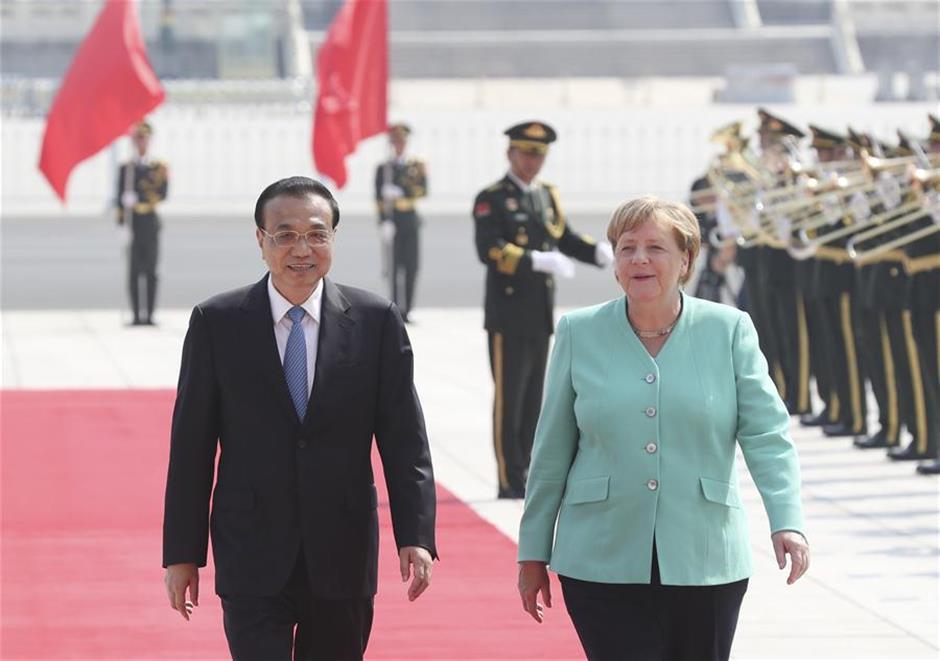 During their talks at the Great Hall of the People, Li said enhancing China-Germany strategic cooperation and maintaining stable development of bilateral ties, at a time when the global economy is facing downward pressure, not only benefits the China-Europe relationship but also contributes to world peace, stability and prosperity.

He called on both countries to safeguard multilateralism and the free trade system with the World Trade Organization as its core.

Both countries need to uphold the ideas of inclusiveness to expand two-way opening of the market, Li said.

"China will not change its initiative to expand market opening up, nor will it change the policy of welcoming foreign investment," said Li, adding that China will further enhance the protection of intellectual property rights.

He said China hopes Germany can maintain the opening up of market as well, relax export restrictions of civil technologies and treat Chinese enterprises in a fair and just way in terms of investment review and market access.

On China-EU relations, Li said China has always attached great importance to Europe and is ready to establish a sound cooperative relationship with new leaders of the EU institutions and push forward the negotiations on China-Europe Bilateral Investment Treaty (BIT) and an agreement of geographical indications, Li said.

Merkel, who is on her 12th visit to China as German chancellor since 2005, commended China on its remarkable progress in the past decades, especially in the recent two decades.

Speaking highly of China's outstanding contribution to the world economy amid the 2008 international financial crisis, Merkel said China has the same right to develop itself as other countries and China's development process should not be impeded.

She said both Germany and China support multilateralism and free trade. Germany looks forward to ending the China-Europe BIT negotiation during Germany's term as the EU rotating presidency in the second half of 2020, she said.

Germany welcomes China's recent opening-up measures in the sectors of finance, insurance and service and is willing to work with China in the areas of self-driving, digitalization, vocational education and youth exchanges, she said, adding that Germany as always welcomes Chinese investment.

After the talks, Li and Merkel witnessed the signing of a string of bilateral deals and jointly met the press. Prior to the talks, Li held a welcoming ceremony for Merkel.

Earlier on Friday, Li had a breakfast meeting with Merkel at the Diaoyutai State Guesthouse.

Merkel is paying an official visit at the invitation of Li from Friday to Saturday. She will visit Wuhan, the capital city of central China's Hubei Province, on Saturday.