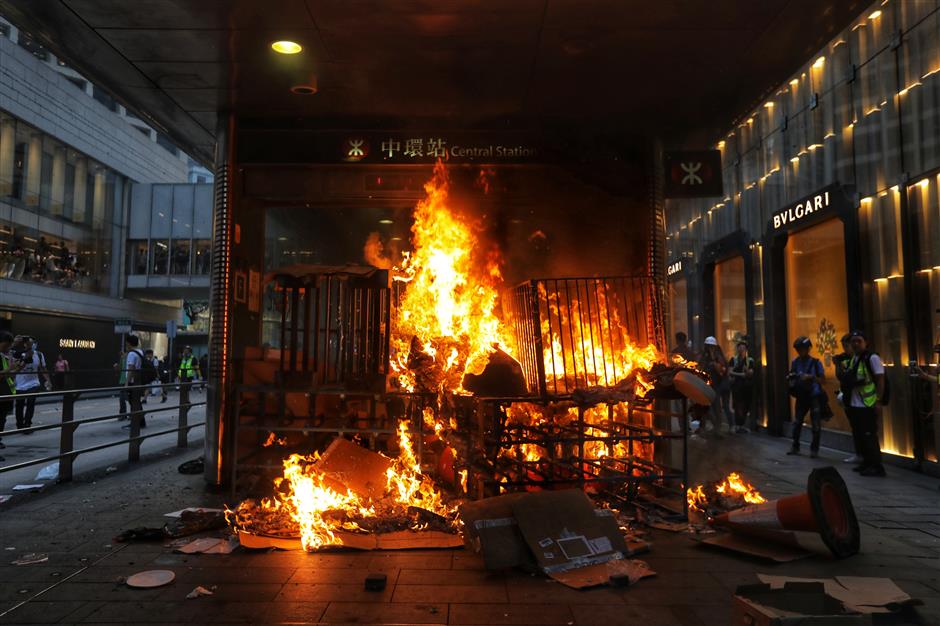 A fire set by protesters burns at the entrance of the Central MTR subway station in Hong Kong yesterday. Rioters descended onto the city’s Central district, blocking roads and forcing the closure of an underground rail station.

Some radical demonstrators set fires on roads and at least one exit of the Mass Transit Railway in the central areas of Hong Kong Sunday afternoon, as prolonged protests continued to disrupt traffic and cause chaos here for the third month.

Rioters smashed windows, obstructed escalators and vandalized facilities at the MTR Central station before starting the arson at one of the exits, forcing the close-down of the station.

They also built barricades with dismantled road railings, trash bins and other miscellaneous objects on streets in Central and Admiralty areas.

Huge smokes billowed into the sky before fire fighters came and extinguished the fire.

As the police carried out dispersal operations in Central and Admiralty districts, some demonstrators headed to Wan Chai and Causeway Bay, blocking carriageways in the areas and paralyzing traffic.

The Hong Kong Special Administrative Region (HKSAR) government's Transport Department announced Sunday evening that several road sections on Hong Kong Island were temporarily blocked to all traffic, and the services of 18 bus routes were suspended and over 60 routes were truncated or diverted.

The MTR announced in the evening that Central and Wan Chai stations were temporarily closed because of an escalation of the situation in the stations.

The police said they have deployed tear gas and used appropriate force to disperse protesters in Causeway Bay.

The police appealed to everyone on site to leave immediately and condemned all violent acts by the radical demonstrators. Residents of the areas were advised to stay tuned to the latest situation and if necessary keep their windows shut and stay indoors.