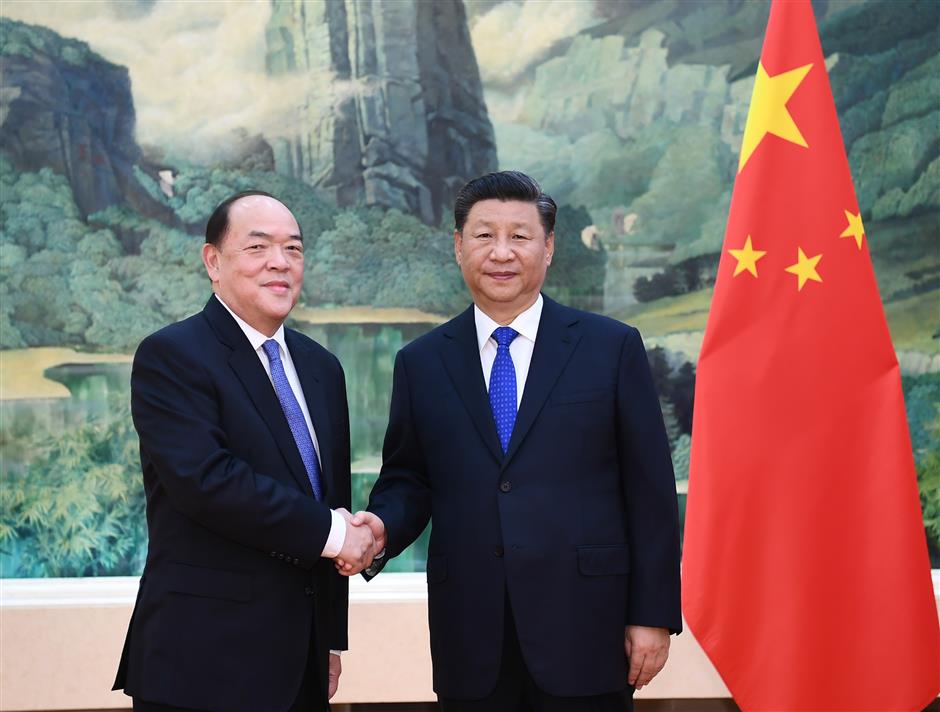 Chinese President Xi Jinping meets with Ho Iat Seng, the newly elected and appointed chief executive of the Macao Special Administrative Region, at the Great Hall of the People in Beijing, capital of China, September 11, 2019.

President Xi Jinping on Wednesday met with Ho Iat Seng, the newly elected and appointed chief executive of the Macau Special Administrative Region, at the Great Hall of the People in Beijing.

Xi congratulated Ho on his appointment by the central government as the fifth-term chief executive of the Macau SAR.

"You have long adhered to the position of loving the country and Macau, enthusiastically served the Macau society, worked wholeheartedly on public posts including as a member of the National People's Congress Standing Committee and president of the Legislative Assembly of the Macau SAR, and made contributions to the country's reform and opening up, modernization, as well as prosperity and stability of Macau," Xi said to Ho, adding that the central government fully recognizes such efforts.

"Your nomination and election with overwhelming support fully show that you have won broad endorsement in Macau," Xi told Ho.

This year marks the 20th anniversary of Macau's return to the motherland.

For the past 20 years, under the leadership of two chief executives Edmund Ho Hau Wah and Chui Sai On, the Macau SAR government has united people from all walks of life, fully and accurately understood and implemented the principle of "one country, two systems," firmly upheld the authority of the Constitution and the Basic Law, passed on the core values of loving the country and Macau, promoted Macau's rapid economic growth, sustained improvement in people's livelihood and social stability and harmony, demonstrating to the world a successful practice of "one country, two systems" with Macau characteristics, said Xi.

"One country, two systems" has proved to be a workable solution welcomed by the people, said Xi.

Xi hoped that Ho will accurately grasp Macau's situation and the country's strategic development needs, unite and lead the Macau SAR government and people from all walks of life to strive for the region's long-term development and continue the successful implementation of "one country, two systems."

Ho said he is honored to be appointed the fifth-term chief executive of the Macau SAR by the central government.

Han Zheng and other senior officials also attended the meeting.