Hanging on for years, secluded clifftop village digs out success 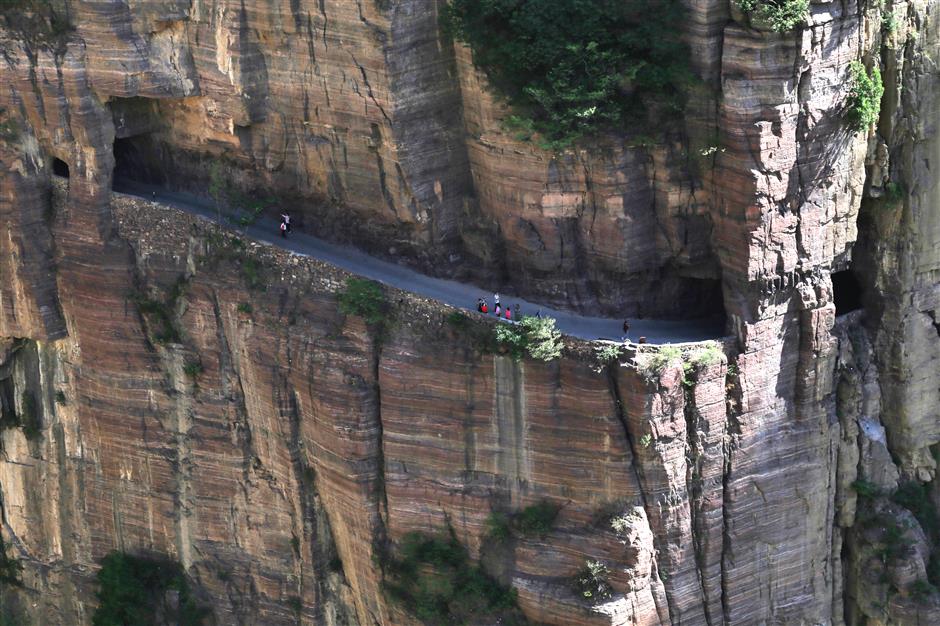 Surrounded by the mist of early morning, a motorized tricycle carrying fresh vegetables runs slowly through a steep and rugged man-made tunnel toward Guoliang, a small Chinese village perched atop a cliff.

As the sun begins to peek over the horizon, the view becomes truly breathtaking. And so begins another day for Guoliang. Owners of rural family inns rush to the vegetable peddler, selecting produce to prepare delicacies for upcoming tourists.

Attracted by the village's breathtaking scenery and Guoliang Tunnel, a death-defying road dug through the side of the mountain by hand, around 1.4 million tourists from home and abroad visited the village last year.

Guoliang sits on a cliff at an elevation of 1,700 meters in the Taihang Mountains, central China's Henan Province. For a long while, hardly anyone knew about this small village with 300 and some residents because of its inaccessibility.

The only way anyone could reach it then was 720 steep, narrow stairs embedded in the mountainside named the "Sky Ladder," which was formed in the Song Dynasty (960-1279).

"It was a tough life. Commodities from the outside world could not reach the village, and our fresh farm products could not be transported to other places," said 72-year-old villager Song Baoqun.

"We had to limit the weight of pigs to 50 or 60 kg; otherwise it would be difficult to carry them down the mountain," Song recalled.

The biggest challenge was posed by medical treatment. If a villager fell ill, eight people were needed to carry a stretcher down the mountain via the "Sky Ladder" over a treacherous four-hour journey to the nearest hospital.

Many villagers died en route, while those with connections moved out of the mountains altogether.

However all this changed in 1972 when the village cadres decided to build a tunnel through the mountains to connect Guoliang with the outside world.

With little engineering knowledge, 13 of the strongest villagers volunteered to take on the difficult mission. Lacking large machinery, they used hand tools such as hammers and chisels and suspended themselves in the air with ropes to carve the roadway inch by inch.

As more villagers joined the team, a 1,250-meter-long Guoliang Tunnel road was completed five years later. The death-defying tunnel, with over 30 rock windows of various sizes and shapes, was honored as the "eighth world wonder."

Isolation, once the very thing that locked people into endless poverty, has turned secluded Guoliang into a tourist attraction since the 1990s. The area, far from the hustle and bustle of modern cities, has also been used as a film location and a site for painting and photography.

Walking through the village, the centuries-old stone walls stand in stark contrast to modern buildings. Li said every household in Guoliang has gotten involved in the tourism industry, running restaurants, hotels and souvenir shops.

"Today's village is quite different from the village of old. Clever minds can put their ideas into practice now," said 32-year-old Shen Hongqi, who owns a rural family inn in Guoliang.

After graduating from university, he returned home and took over the business from his father. Over the past decade, he upgraded his family inn into a modern hotel equipped with meeting rooms and 35 guest rooms, achieving the highest scores among hotels near Guoliang area on Chinese travel services and social networking platform Mafengwo.

Shen is among a dozen university graduates who have returned to Guoliang, their hometown, and started their own businesses in recent years.

For Shen Heshan, a local village cadre, the biggest change lies in the people. Before the tunnel road was built, villagers could hardly fill their bellies. Now the annual per capita income could surpass 30,000 yuan.

"In the past, hungry villagers envied those living on the plains. Now nobody wants to leave this clifftop village. We feel good about our home," he said.