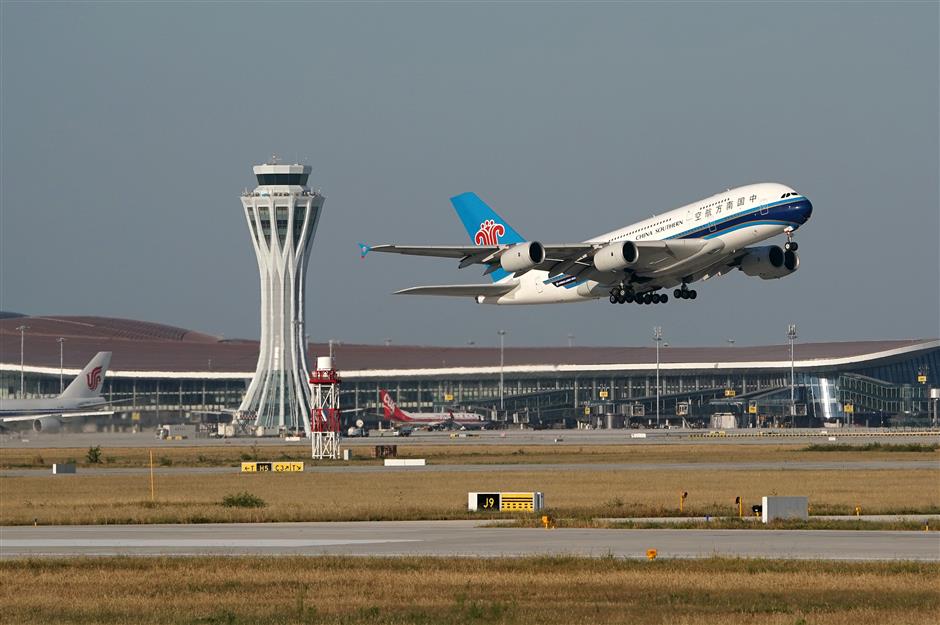 Located 46 km south of downtown Beijing, the phoenix-shaped aviation hub is expected to take the pressure off Beijing Capital International Airport and facilitate coordinated development of the capital and its nearby regions.

The massive airport is among a series of world-renowned mega-projects built by the country over the past few years that have promoted common development and a shared future.

About 82 km away from Tianjin Municipality and 197 km away from Shijiazhuang, capital of neighboring Hebei Province, the new airport serves as the regional transport hub for Beijing, Tianjin and Hebei, or "Jing-jin-ji."

The project is expected to significantly facilitate the coordinated development of "Jing-Jin-Ji" and help create a development model with a better economic structure, cleaner environment, and improved public services in the city cluster.

President Xi Jinping stressed that the new airport, which was built in less than five years and put into operation smoothly, has shown China's prowess in engineering construction.

It is also a display of the political advantages of the Communist Party of China (CPC) leadership and China's socialist system that can mobilize all sources to make great achievements, said Xi, also general secretary of the CPC Central Committee and chairman of the Central Military Commission.

Less than a year ago, Xi announced the launch of another mega-project that also promotes coordinated regional development: the Hong Kong-Zhuhai-Macao Bridge.

Built with an investment of 126.9 billion yuan (US$18 billion), the gigantic project is expected to contribute to the development of the Guangdong-Hong Kong-Macao Greater Bay Area.

Praising builders of the bridge for breaking a number of world records, Xi said they demonstrate the nation's spirit of striving to overcome any difficulties, the national strength, the innovative ability, and the aspiration to be the world's best.

The mega-projects are celebrated not only for their marvelous engineering feats but also for their role in implementing China's new development philosophy that underscores coordinated development and innovation.

A signature mega-project embodying China's self-reliant innovation drive is the domestically-built Sunway TaihuLight, China's fastest supercomputer, whose components, including its chips, are all designed and made in China.

Home to the powerful Tianhe series and Sunway TaihuLight, China dominated the list of the world's fastest supercomputers by the number of systems for the fourth consecutive year, according to a semiannual ranking of the Top 500 published earlier this year.

Supercomputers are playing a more and more important role in supporting national scientific and technological innovation, said Li Qiong, a researcher with the National University of Defense Technology, where China's first supercomputer was born.

"We are developing the Tianhe E-Class computer, or an exascale supercomputer, which will be able to perform billions of calculations per second," said Li.

China's new generation of the exascale supercomputer, the Tianhe-3, will also run on domestically-produced chips.

"The supercomputer has become a symbol of power, reflecting the innovative capabilities of China. Next, we will connect these supercomputing centers and share the resources nationwide," said Mei Jianping, deputy director-general of the Department of High and New Technology of the Ministry of Science and Technology.

While China's mega-projects serve as the launchpad of the country's development plans, they are also helping the world push the boundaries of a shared future.

As a history-making step of China's lunar exploration program, the Chang'e-4 lunar mission realized the first-ever soft landing and roving survey on the far side of the moon in January and carried out significant cooperation with multiple countries and international organizations.

The mission has implemented the spirit of cooperating for win-win results and promoted the building of a community with a shared future for humanity through practical actions.

China and South Africa have enhanced cooperation in research using FAST and Africa's most advanced telescope Meerkat to help answer fundamental questions about the origin and evolution of the universe.

"We already had close cooperation with Australia in jointly organizing symposiums and training classes. The exchanges between China and South Africa have just started," said Wu Xiangping, an academician of the Chinese Academy of Sciences.

"We will step up cooperation with South Africa, and the priority will be finding common interests," Wu said. "For instance, the study of neutral hydrogen might be a possible direction for joint research. Understanding neutral hydrogen, the first element formed after the Big Bang and the most abundant element in the universe, might help us trace the origin of the universe and study the large scale structure of the cosmos."