Xing Hao, a 31-year-old designer, is part of a 60-person team at Beijing Gongmei Group in charge of making China's national gifts. As the most honorable presents from China to foreign guests, the national gifts have witnessed the progress of China's diplomacy and spread Chinese culture to the world.

Beijing Gongmei Group has a long history of making national gifts. It was the company that made the ivory carving piece of the Chengdu-Kunming railway, the first gift from New China to the United Nations after China restored its legitimate seat in the UN in 1971.

The company made 40 national gifts last year and already produced more than 40 so far this year.

The R&D center that Xing Hao works at is the core design team behind many of China's national gifts. The emergence of the team came about during the 2008 Beijing Olympics.

The company received the task to design the seal of the Beijing 2008 Olympics in 2003, which would be permanently displayed in the Olympic Museum in Lausanne, Switzerland.

The important task was given to the R&D center. After 48 hours, the designers handed over a draft to experts including Yang Boda, former deputy head of the Palace Museum, to review. Five days later, the model was sent to the Beijing Olympic Committee.

Members of the committee were impressed that the team could present a design that perfectly matched the emblem for the Beijing Olympics in such a short time. 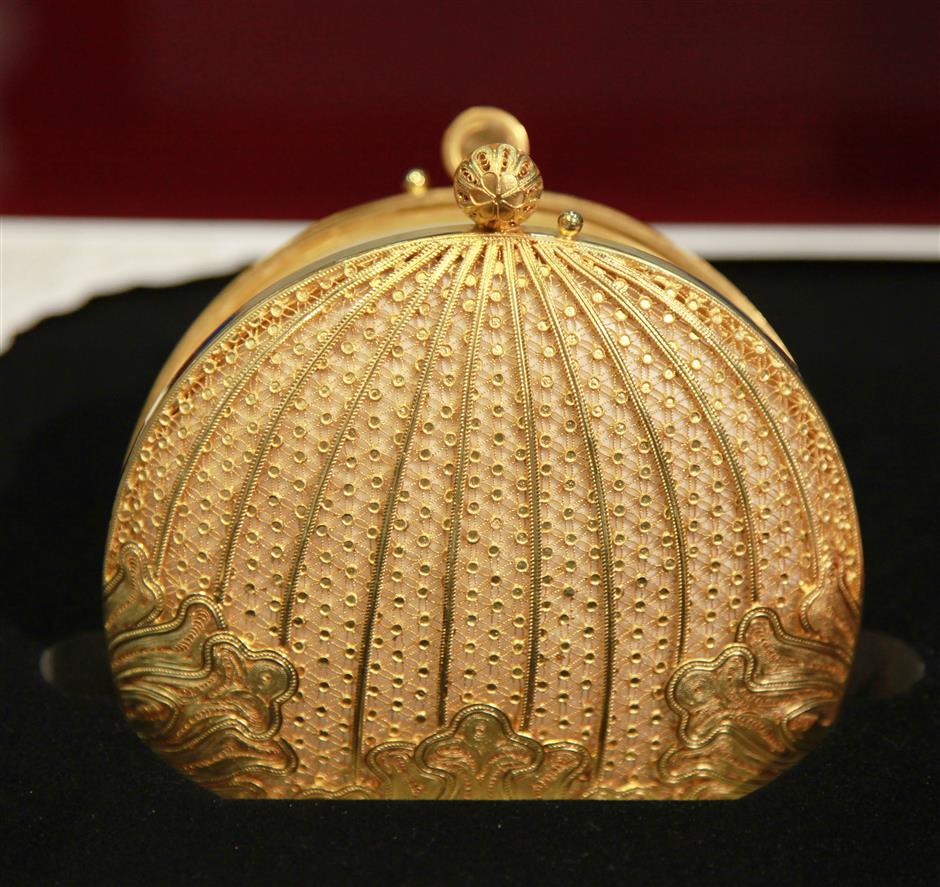 A replica of the filigree handbag for the foreign leaders' spouses during the APEC Beijing summit in 2014.

Since then, the R&D center has become an important force in the designing and manufacturing of national gifts. Their famous pieces include filigree handbags for the foreign leaders' spouses during the APEC Beijing summit in 2014, and the "Zun of Peace," an ancient Chinese-style wine container crafted with the Chinese cloisonne technique presented to the UN in 2015 for permanent display at the UN headquarters.

The national gifts have not only impressed foreign friends but also helped revive some traditional techniques in China.

"The Chinese cloisonne technique is a centuries-old artistic skill that was once widely praised by people around the globe. But vicious competition and shoddy products almost ruined the industry," said Duan Tiyu, deputy head of the company.

In recent years, the company has recruited college graduates to combine traditional art with modern aesthetics in the design of national gifts. Xing, who graduated from Central Academy of Fine Arts, is among them.

The young generation of Chinese people are confident about local culture, said Xing. "When reviewing Chinese art history, we can always find new shining points. It's the duty of our young designers to discover them and pass them on," he said.