Xi says no force can ever undermine China's status 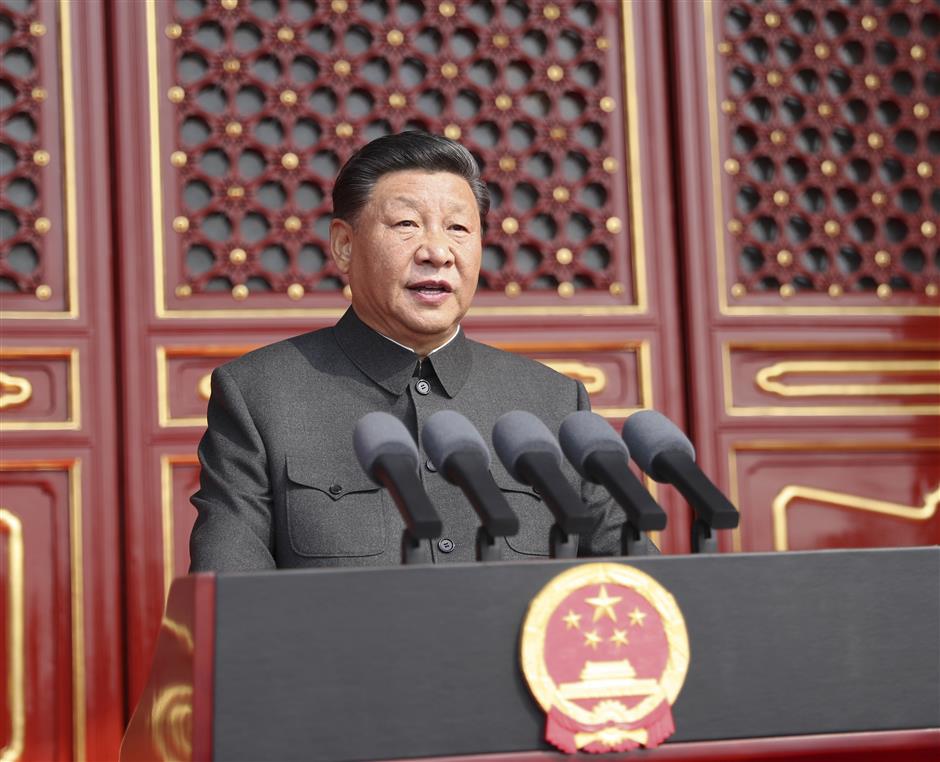 Chinese President Xi Jinping on Tuesday delivers a speech at a grand rally at Tian'anmen Square in Beijing to celebrate the 70th anniversary of the founding of the People's Republic of China (PRC).

No force can ever undermine China's status, or stop the Chinese people and nation from marching forward, President Xi Jinping said on Tuesday, China's National Day.

Xi, also general secretary of the Communist Party of China Central Committee and chairman of the Central Military Commission, made the remarks in a speech delivered at a grand rally in central Beijing to celebrate the 70th founding anniversary of the People's Republic of China (PRC).

"We gathered here today for a grand rally to celebrate the 70th anniversary of the founding of the PRC," Xi said. "At this very moment, Chinese people of all ethnic groups and all the sons and daughters of the Chinese nation at home and abroad take pride in and joyfully give our best wishes to our great motherland."

Xi remembered revolutionary forefathers and martyrs for their feats in pursuing national independence and liberation, a stronger and more prosperous country and the improvement of the people's well-being.

He extended warm National Day congratulations to Chinese people of all ethnic groups and all compatriots at home and abroad, and expressed heartfelt gratitude to friends around the world for their support for China's development.

"Seventy years ago on this day, Comrade Mao Zedong solemnly declared here to the world that the PRC was founded and the Chinese people had stood up," Xi said on Tian'anmen Rostrum.

"This great event completely reversed China's miserable fate born from poverty and weakness and being bullied and humiliated over more than 100 years since the advent of modern times," Xi said, adding that the Chinese nation has since then embarked on the path of realizing national rejuvenation.

Over the past seven decades Chinese people of all ethnic groups have made great achievements that amazed the world through concerted efforts and arduous struggle, he said.

Xi stressed the importance of upholding the Party leadership, ensuring the principal status of the people, staying on the path of socialism with Chinese characteristics and fully implementing the Party's basic theory, line and policy.

He called for efforts to constantly meet people's aspirations for a better life and make new historic achievements.

Xi stressed that the principles of "peaceful reunification" and "one country, two systems" should be upheld.

He demanded efforts to maintain lasting prosperity and stability in Hong Kong and Macao, promote the peaceful development of cross-Strait relations, unite all Chinese sons and daughters, and continue to strive for China's complete reunification.

Xi pledged that the country will stay on the path of peaceful development and pursue a mutually beneficial strategy of opening up.

"We will continue to work with people from all countries to jointly build a community with a shared future for humanity," he said.

The Chinese People's Liberation Army and the People's Armed Police Force should always preserve their nature, purpose and character as the forces of the people, resolutely safeguard China's sovereignty, security and development interests, and firmly uphold world peace, he said.

"China's yesterday has been inscribed in human history while China's today is being created in the hands of hundreds of millions of Chinese people," Xi said. "China will surely have an even brighter future."

"All Party members, armed forces and people of all ethnic groups should unite closer together, stay true to the founding mission, build on existing achievements and continue to develop our people's republic," he said, adding that continued efforts should be made to achieve the two centenary goals and national rejuvenation.