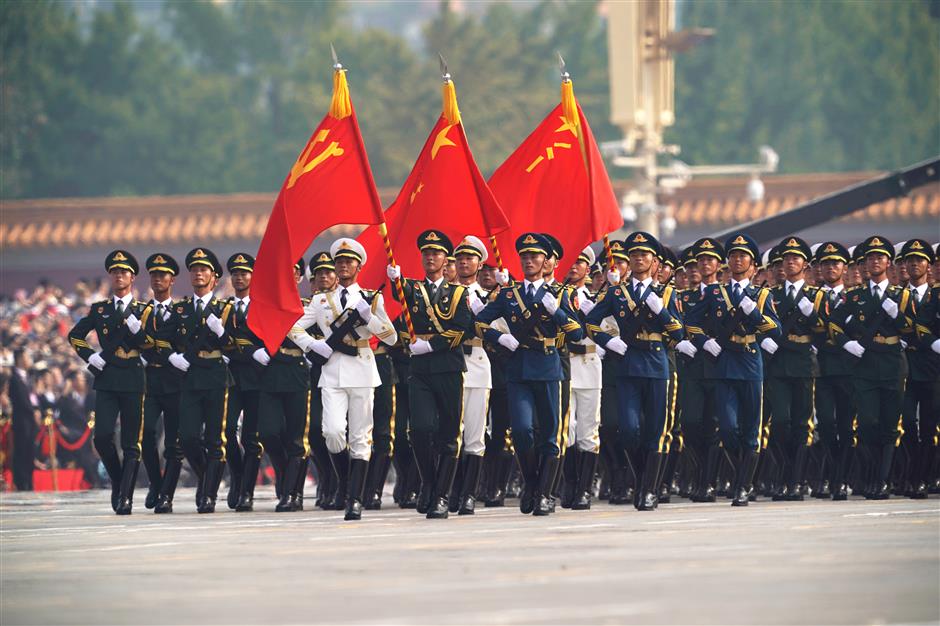 Chinese President Xi Jinping reviewed the armed forces at the heart of Beijing Tuesday morning, his first on National Day, to mark the 70th founding anniversary of the People's Republic of China.

Standing in a black open-roof Red Flag limousine, Xi, also general secretary of the Communist Party of China (CPC) Central Committee and chairman of the Central Military Commission, gave the order to Yi Xiaoguang, commander-in-chief of the military parade, to start the review.

At the beginning, standing in the limo slowly passing the fluttering flags of the CPC, the nation and the People's Liberation Army (PLA) in Tian'anmen Square, Xi watched the flags with full attention as a salute.

Amid military music played by a military band, the Red Flag limo drove eastward along Chang'an Avenue, which was lined with 15 foot formations and 32 armament formations made up of about 15,000 service men and women as well as 580 pieces of armament.

Xi repeated salutes through microphone: "Salute to you, comrades!" and "Comrades, thanks for your hard work!" The soldiers replied: "Hail to you, Chairman!" and "Serve the people!"

"Follow the Party! Fight to win! Forge exemplary conduct!" the servicemen and women saluted Xi and exclaimed when the limo drove back to Tian'anmen Rostrum. 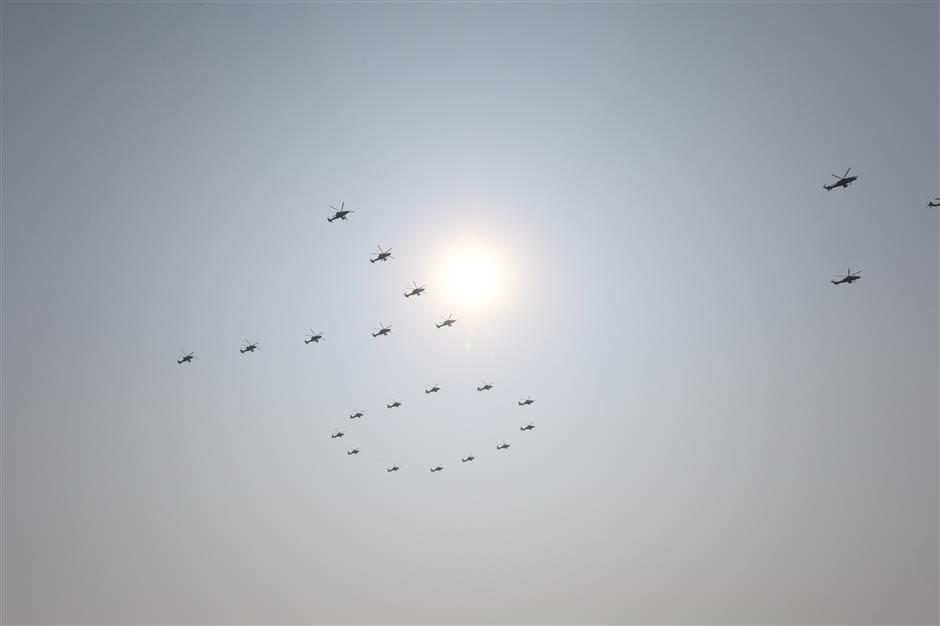 An air echelon flew over Tian'anmen Square Tuesday morning escorting flags of the Communist Party of China (CPC), the nation, and the People's Liberation Army (PLA), marking the start of a grand National Day military parade.

Each flag was carried by a Z-8B transport helicopter and guarded by two Z-10 armed helicopters on both sides.

On the ground, a formation of Guard of Honor marched along the east Chang'an Avenue to Tian'anmen Square, holding high the CPC flag, the national flag and the PLA flag. 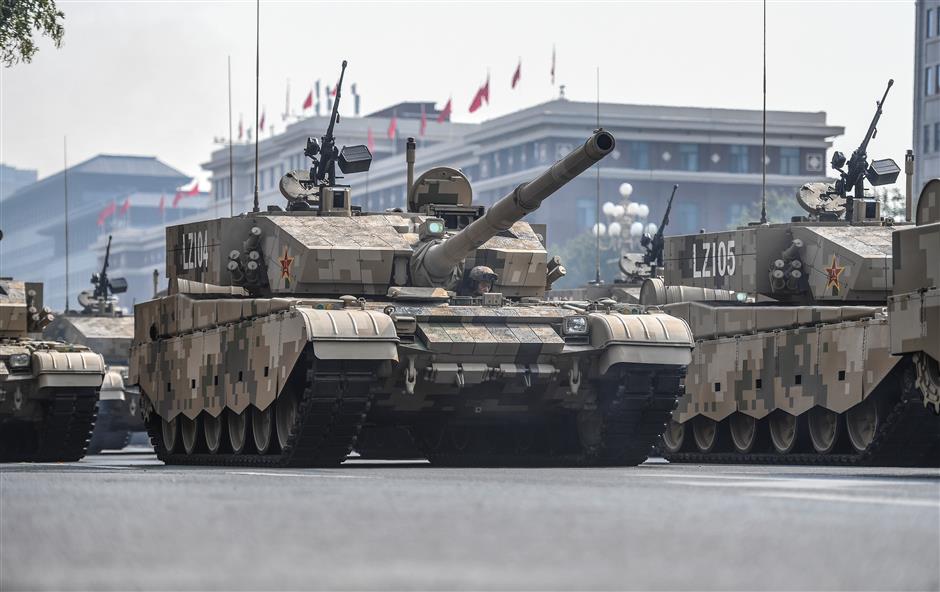 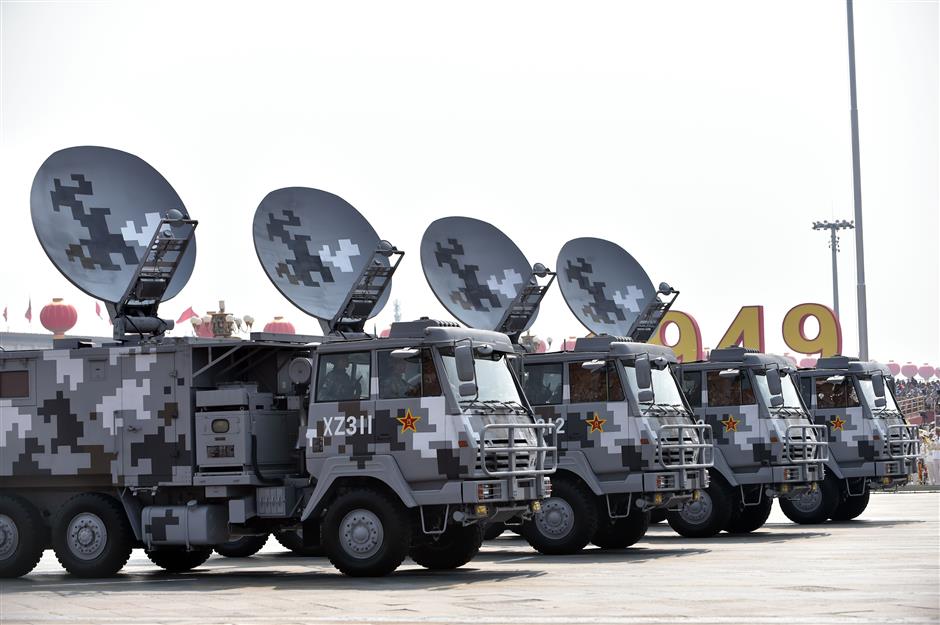 The new-type informationized armed forces of the People's Liberation Army (PLA) made their first public appearance in a National Day military parade through Tian'anmen Square on Tuesday.

The forces drove through the square in four formations, each with 16 vehicles, showcasing China's new achievements in national defense and military reform in the information era.

The first formation consisted of vehicles equipped with antennas in different shapes. The new-generation informationized military equipment is capable of helping the PLA gain an upper hand in battlefields with complex electromagnetic conditions.

The second formation demonstrated four models of equipment that are important parts of the PLA's new-generation equipment system for tactical electronic countermeasure.

Covered with urban camouflage, the third formation showcased PLA's latest achievements in new mobile communication equipment, which plays an important role in beefing up the PLA's joint operations and trans-theater combat capabilities based on the network and information system. 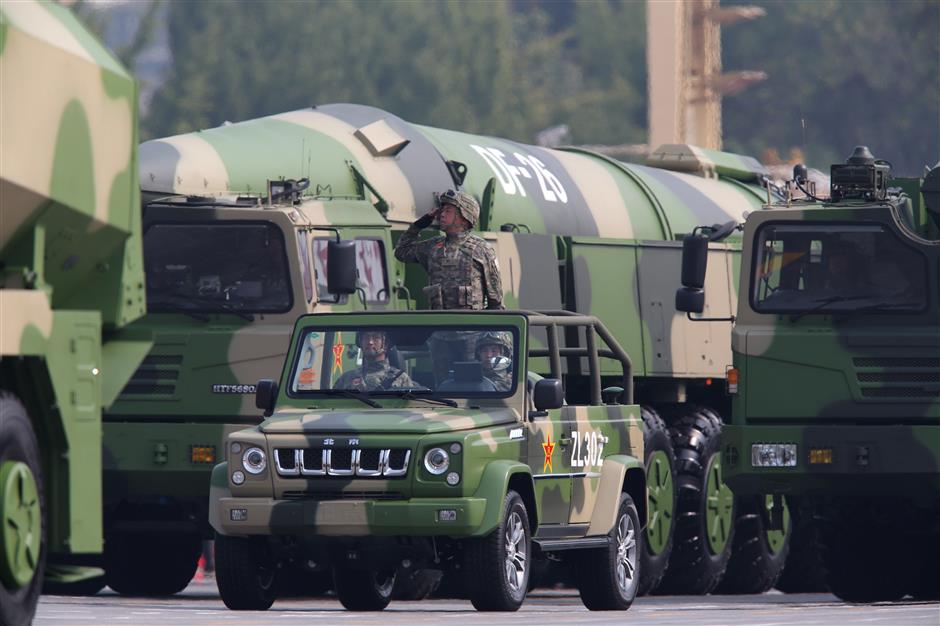 A formation of Dongfeng-26 conventional and nuclear missiles was reviewed Tuesday in a military parade in Beijing marking the 70th founding anniversary of the People's Republic of China.

The formation is comprised of two missile troops. The integrated conventional and nuclear missiles are capable of precision strikes against different kinds of targets. All the reviewed missiles have undergone the test of actual combat training. 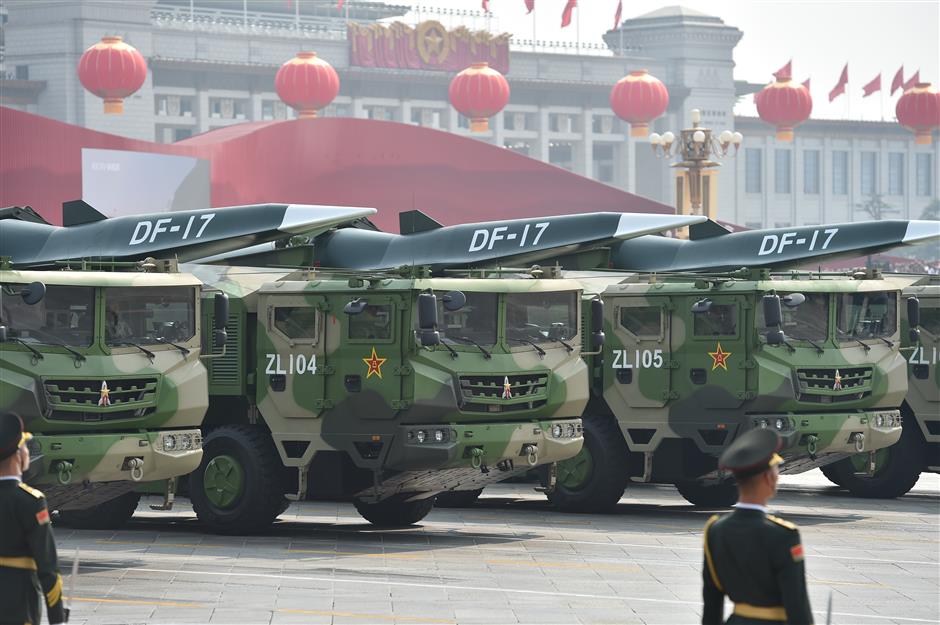 China on Tuesday unveiled its new Dongfeng-17 conventional missiles for the first time in the National Day military parade marking the 70th founding anniversary of the People's Republic of China.

The missile has the capability of precision strikes against short-and medium-range targets, with strong penetration capacity in all-weather conditions.

The formation is comprised of two conventional missile brigades from a base of the People's Liberation Army Rocket Force. 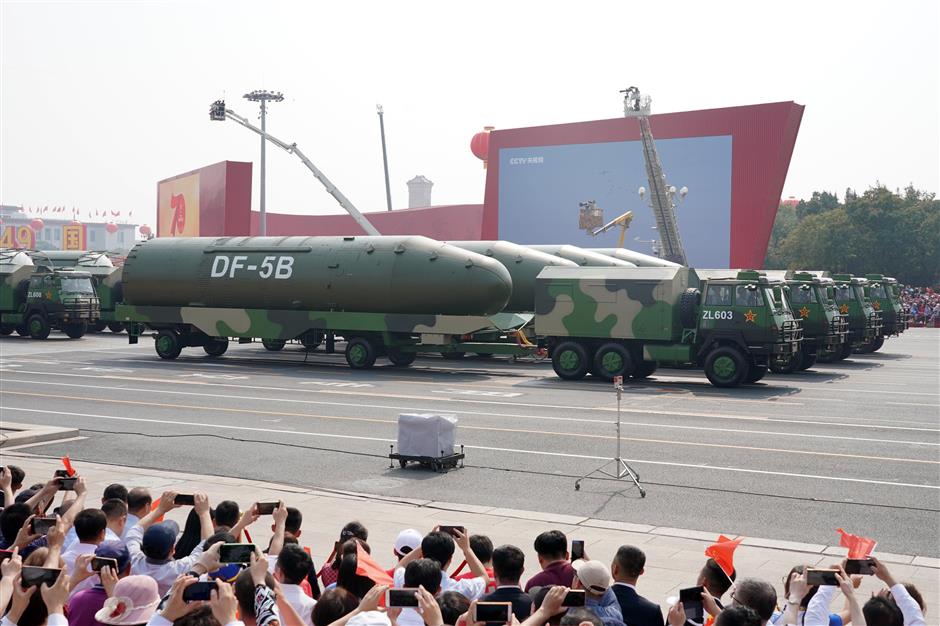 A formation of Dongfeng-5B nuclear missiles was reviewed during a military parade Tuesday in central Beijing to celebrate the 70th founding anniversary of the People's Republic of China.

The main body of the formation is made up of a missile brigade from the PLA Rocket Force.

Over decades of development, the brigade established in the early 1960s has successfully launched dozens of strategic missiles. 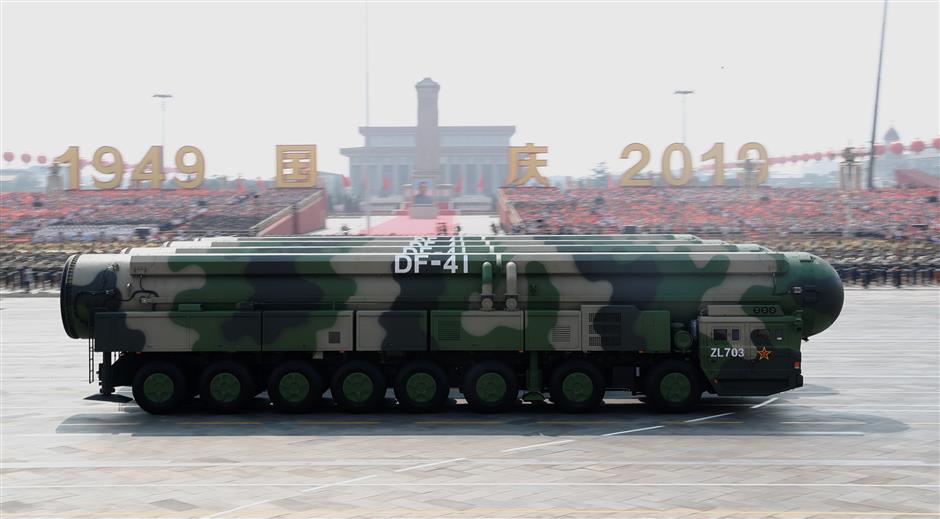 A formation consisting of 16 new-type strategic nuclear missile launchers carrying Dongfeng-41 passed through Tian'anmen Square in the massive parade in celebration of the 70th founding anniversary of the People's Republic of China.

The formation is made up of two missile brigades from the rocket force. 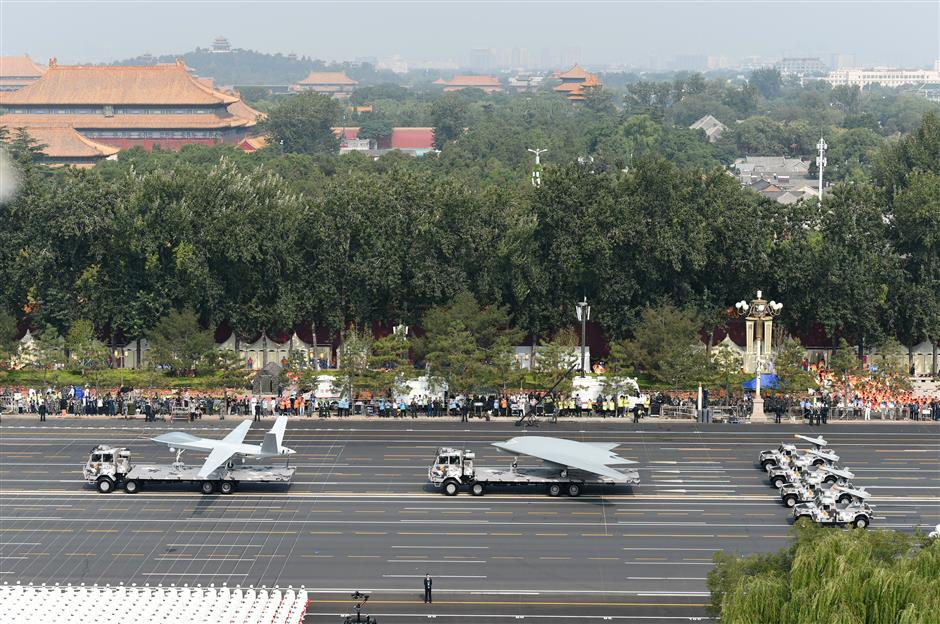 China's unmanned aerial vehicle (UAV) phalanxes were in the spotlight Tuesday in a military parade marking the 70th founding anniversary of the People's Republic of China.

The weaponry includes reconnaissance drones in multi-range and multi-altitude.

Among them, a high-altitude high-speed reconnaissance drone, the only all black-coating UAV in the parade, made public appearance for the first time.

The phalanx showcases the new-type combat force in the future warfare and all these aerial armaments reviewed are domestically-developed, said Dang Dongxing, a military official of one of the phalanxes, noting that China's unmanned combat armaments are close to or have reached the world leading level in some aspects.

Also displayed in the parade were China's reconnaissance-strike drones, such as GJ-2 and GJ-11, as well as unmanned underwater vehicles.