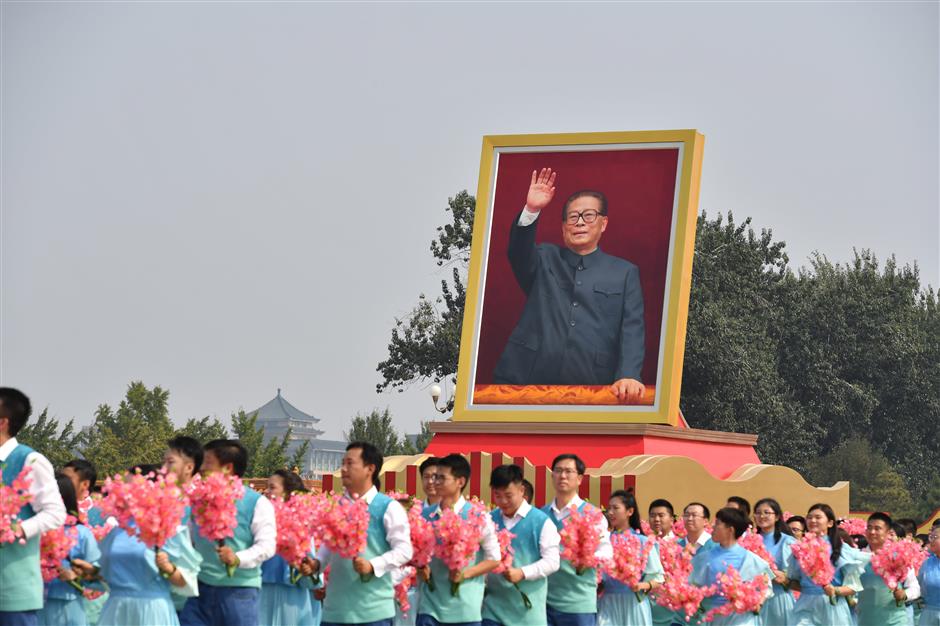 A formation surrounding a huge portrait of Jiang Zemin and the slogan "Keeping up with the Times" marched through Tian'anmen Square.

The second part of a mass pageantry celebrating the 70th founding anniversary of the People's Republic of China highlighted the country's reform and opening-up with nine formations marching past the Tian'anmen Square Tuesday.

The leading formation presented a huge portrait of Deng Xiaoping, the chief architect of the reform and opening-up pioneered in 1978, and the slogan "Critical Decision" was surrounded by paraders.

Chinese communists, with Comrade Deng Xiaoping as their chief representative, established the Deng Xiaoping Theory and made the historic decision of implementing reform and opening-up, ushering in socialism with Chinese characteristics, said an official narrator of the pageantry.

The following two formations marked the beginning of China's reform in rural areas and the ground-breaking achievements in the special economic zones.

A formation surrounding a huge portrait of Jiang Zemin and the slogan "Keeping up with the Times" marched through Tian'anmen Square.

Chinese communists, with Comrade Jiang Zemin as their chief representative, formed the Theory of Three Represents and successfully advanced the socialism with Chinese characteristics into the 21st century, the narrator said.

A formation named "One Country, Two Systems" followed, with compatriots from Hong Kong, Macao and Taiwan and masses from all walks of life waving flags and cheering to wish the motherland a "happy birthday."

There was also a formation paying tribute to the arrival of the 21st century. 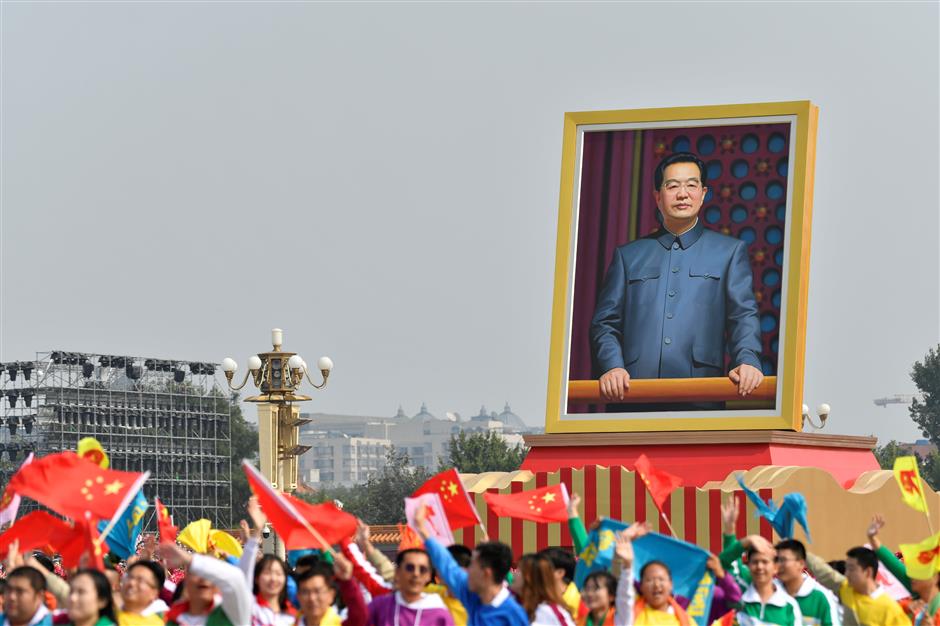 A formation surrounding a huge portrait of Hu Jintao and the slogan "Scientific Development."

Then came a formation surrounding a huge portrait of Hu Jintao and the slogan "Scientific Development."

Chinese communists, with Comrade Hu Jintao as their chief representative, formed the Scientific Outlook on Development, having upheld and developed the socialism with Chinese characteristics at a new historical starting point, the narrator said.

Yang Yong, a parader with the Olympics-themed formation, said the National Day parade and mass pageantry demonstrated the superiority of the socialist system.

"Our country is getting stronger, and our life keeps getting better and better," Yang said.

Meng Qingchao, another parader, said great changes have taken place in China over the past seven decades, and people's livelihoods have improved significantly since the reform and opening-up.