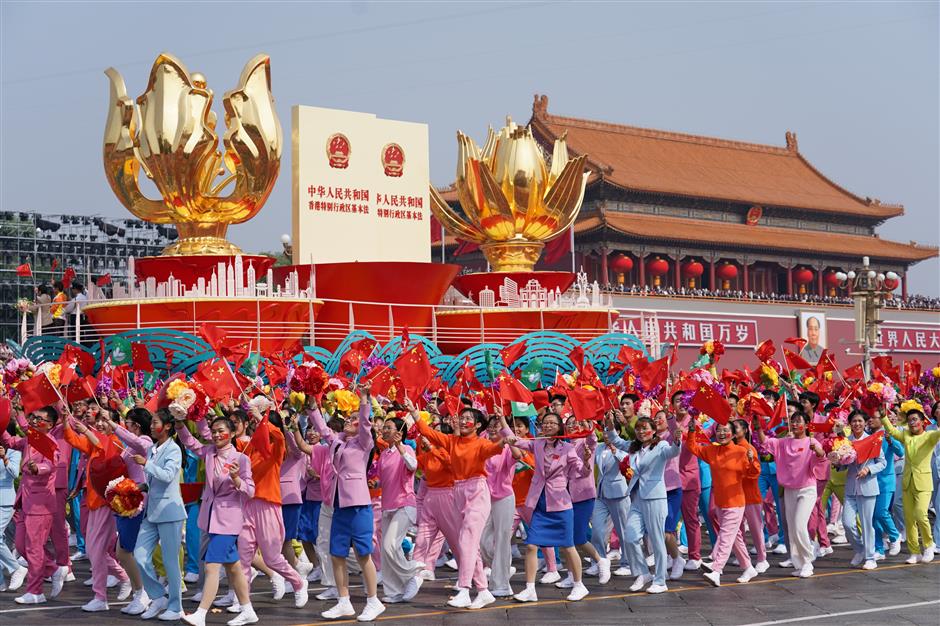 The third part of a mass pageantry celebrating the 70th anniversary of the founding of the People's Republic of China highlighted the Chinese nation's great rejuvenation with 18 formations marching through the Tian'anmen Square in central Beijing Tuesday.

At the center of the leading formation was a giant portrait of Xi Jinping.

Since the 18th Communist Party of China National Congress, the CPC Central Committee with Comrade Xi Jinping at the core has led all Party members and the Chinese people of all ethnic groups in a concerted effort to carry out a great struggle, develop a great project, advance a great cause and realize a great dream, established Xi Jinping Thought on Socialism with Chinese Characteristics for a New Era, and pushed for historic achievements and shifts in the cause of the Party and the country, said an official narrator of the pageantry.

"Socialism with Chinese characteristics has entered a new era. The Chinese nation has made a great leap from standing up to growing rich and to becoming strong," said the narrator.

Fu Wentao, a pilot of deep-sea manned submersible Jiaolong, was among the paraders in the formation.

"I'm so proud that China has grown rich and strong. I'm also happy that I can do my part for the country in the new era," Fu said, adding that he would work harder with greater enthusiasm.

Wang Binlu, a student with North China Electric Power University in Beijing, said she was one of the many in her university that signed up for the pageantry.

"My grandpa is a member of the CPC and he really hopes that I could be part of the pageantry," she said, adding that all her family members would be watching her on TV.

A float in the shape of a Chinese mythical giant bird Kunpeng drove by, symbolizing the soaring momentum of the Chinese nation. Floats representing the country's provinces, autonomous regions, municipalities, Hong Kong, Macao and Taiwan followed.

Then came a formation underscoring a community with a shared future for humanity, which featured Chinese and foreign youth joining hands. The formation also highlighted the Belt and Road Initiative.

Josue Yuan Xie, a Brazilian studying at Peking University, said he was very impressed by the country's National Day celebration.

As one of the paraders, he said the event did not only allow him to make a lot of Chinese friends, but also gave him insight into China's politics, economy and culture.

"I recognize that China is a very cohesive country and I think it will become richer and richer in the future," he said.

Another formation demonstrated the CPC's sweeping victory in the fight against corruption, highlighting remarkable outcomes in full and strict governance over the Party.