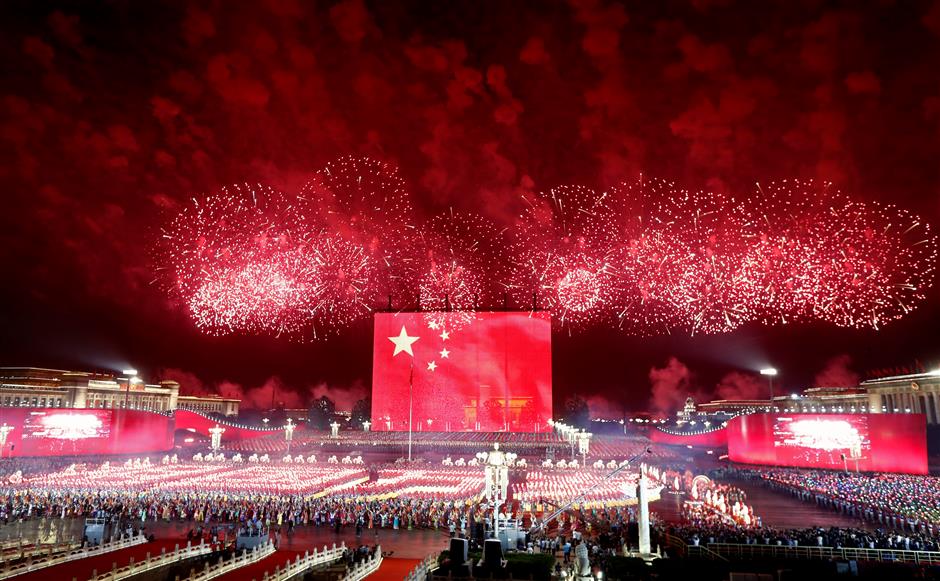 A grand evening gala is staged on the Tian'anmen Square to celebrate the 70th anniversary of the founding of the People's Republic of China (PRC), in Beijing on October 1.

With tens of thousands of people singing, dancing and cheering, and fireworks illuminating much of downtown Beijing, the heart of the national capital was turned into a sea of festivity as a grand evening gala was held Tuesday to mark New China's 70th birthday.

President Xi Jinping attended the gala, a major event of the anniversary celebrations, along with Li Keqiang, Li Zhanshu, Wang Yang, Wang Huning, Zhao Leji, Han Zheng and Wang Qishan, as well as many other leaders, incumbent and retired.

Minutes prior to the gala, Xi, also general secretary of the Communist Party of China Central Committee and chairman of the Central Military Commission, and other Chinese leaders arrived at Tian'anmen Rostrum, waving to the people at Tian'anmen Square amid cheers.

The 90-minute gala started at around 8 p.m. when fireworks rocketed into the sky, displaying the number 70 over the square.

A central performance area spanning the square and the southern point of Golden Water Bridge at the foot of Tian'anmen Rostrum was set aside for large-scale performances. 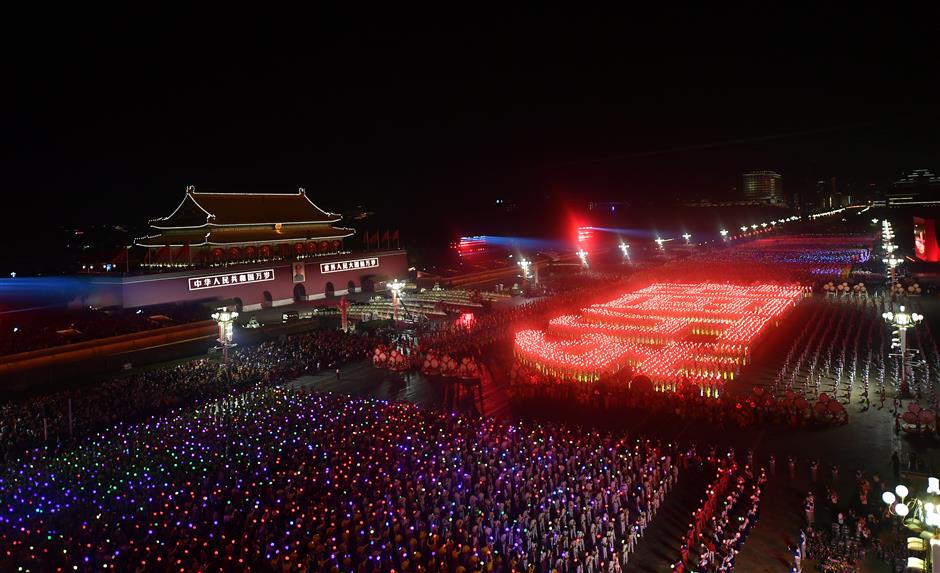 In addition, part of Chang'an Avenue was divided into 10 sections where tens of thousands of people sang and danced in groups, extolling the People's Republic of China (PRC) and the new era.

"The event aims to highlight the new look of a new era through a free, lively and jubilant atmosphere," said Zhang Yimou, chief director of the evening gala.

The performances began with "Ode to the Red Flag," with more than 3,000 performers carrying light panels portraying a huge national flag, and scenes of soldiers guarding the flag and children saluting the flag.

Performers danced to songs that won the hearts of generations of Chinese over the past decades during the gala.

Cai Mingcan, 42, was a dragon dancer at the square when the PRC marked its 50th and 60th founding anniversaries.

Coming back for the 70th anniversary filled him with excitement and honor, said Cai, now a coach for his dragon dance team in southwest China's Chongqing. "I hope I can come back again for the 80th-, 90th- and 100th-anniversary celebrations to continue to witness the prosperity of our country."

With the last round of fireworks flowering in the night sky, the gala concluded at around 9:30pm amid the classic song "Ode to the Motherland" sung by all the participants including Xi and other Chinese leaders.