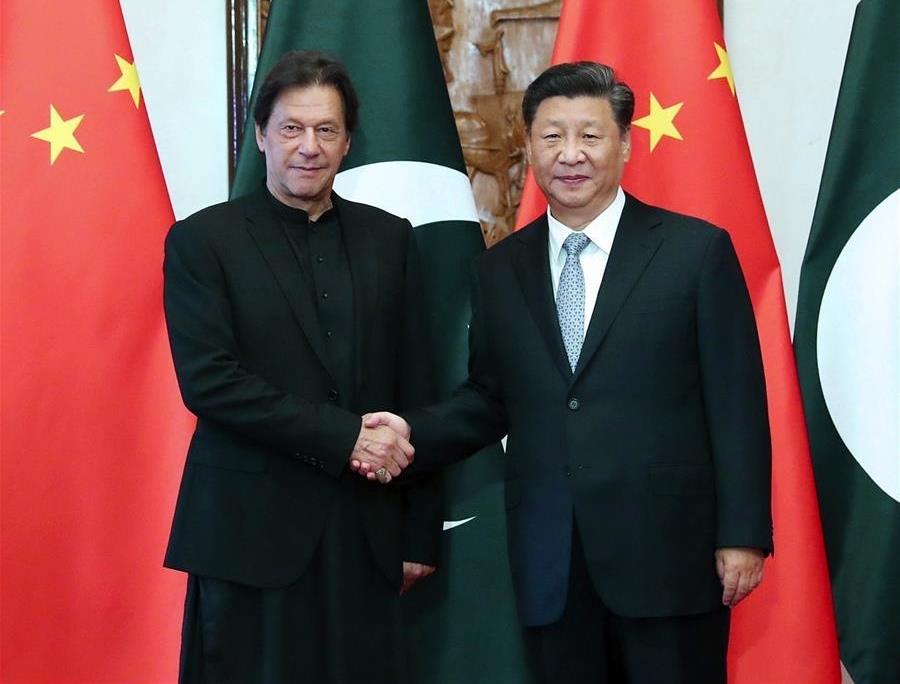 Chinese President Xi Jinping on Wednesday met with Pakistani Prime Minister Imran Khan, vowing to work jointly to strengthen strategic coordination and pragmatic cooperation so as to forge a closer China-Pakistan community of shared future in the new era.

Noting the two countries as all-weather strategic cooperative partners, Xi said no matter how the international and regional situation changes, the friendship between China and Pakistan has always been unbreakable and rock-solid, and China-Pakistan cooperation has always maintained strong vitality with continuous expansion.

China has always viewed relations with Pakistan as a diplomatic priority and will continue to firmly support Pakistan on issues concerning its core interests and of major concern to it, Xi said.

This year marks the 70th anniversary of the founding of the People's Republic of China.

"We have held a series of celebration activities, which is an opportunity for intensive patriotic education. Chinese people, nearly 1.4 billion in number, have forged a cohesive force with unprecedented patriotism, consolidating our confidence and determination to continue down the path of socialism with Chinese characteristics against all odds, run our own affairs, and stand firm in the community of nations," Xi said.

In the past, Pakistan selflessly provided help to China in difficult times, and now that China has developed, it sincerely hopes to help Pakistan for better development, Xi said.

He called on the two sides to maintain close high-level exchanges, step up strategic communication and coordinate positions on major issues in a timely fashion.

China highly appreciates and firmly supports Pakistan's efforts in fighting terrorism, Xi said, calling on the two sides to beef up communication and cooperation within the United Nations, the Shanghai Cooperation Organization and other multilateral mechanisms so as to jointly safeguard regional peace and stability.

Imran Khan offered his congratulations for the 70th anniversary of the founding of the People's Republic of China.

Pakistan is delighted to see China's remarkable development achievements and is grateful to China for always adhering to principles and upholding justice and for its firm support and selfless help to Pakistan, Khan said.

"Facts have shown that China is Pakistan's all-weather strategic cooperative partner and the two countries' friendship enjoys popular support," he said, hoping to continue strengthening exchanges, coordination and cooperation with China, and advancing the construction of the CPEC so as to make it a paradigm of the Belt and Road Initiative.

He also pledged to continue to firmly advance counter-terrorism efforts so as to safeguard security and stability.

Khan briefed Xi on Pakistan's views on the Kashmir situation, hoping to avoid deterioration of the situation, saying that Pakistan values and appreciates China's objective and unbiased position.

Xi told Khan that China is paying close attention to the Kashmir situation and the facts are clear.

"China supports Pakistan to safeguard its own legitimate rights and hopes that the relevant parties can solve their disputes through peaceful dialogue," Xi said.