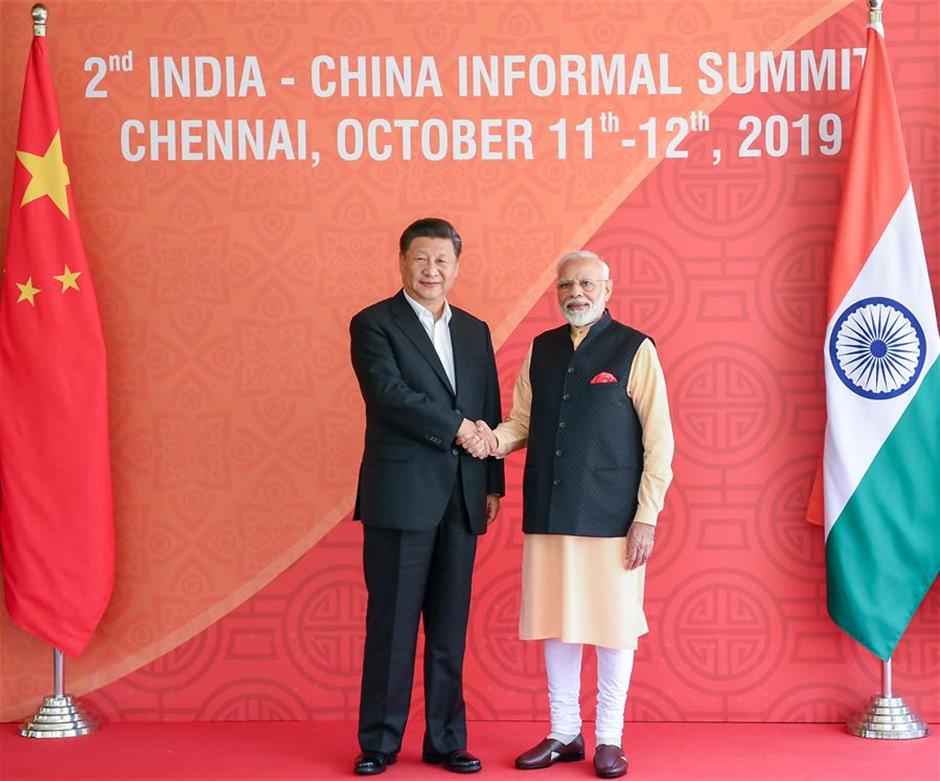 The two leaders, in a friendly and relaxed atmosphere, held a candid and in-depth exchange of views on bilateral relations and major international and regional issues of common concern.

As an important neighbor of each other, China and India are the only two countries with a population of more than 1 billion, Xi said, noting that maintaining and developing good relations between the two countries is China's unwavering policy.

Under the current international circumstances, the two countries shoulder increasingly important responsibilities in safeguarding global stability and promoting development, he said, adding that the next few years will be a crucial period for China and India to realize national rejuvenation and also will be a crucial period for the development of China-India relations.

"We must hold the rudder and steer the course of China-India relations, map out a hundred-year plan for the relations from a strategic and long-term perspective, inject a strong endogenous impetus into bilateral relations, and work together to realize the great rejuvenation of our two great civilizations," said the Chinese president. 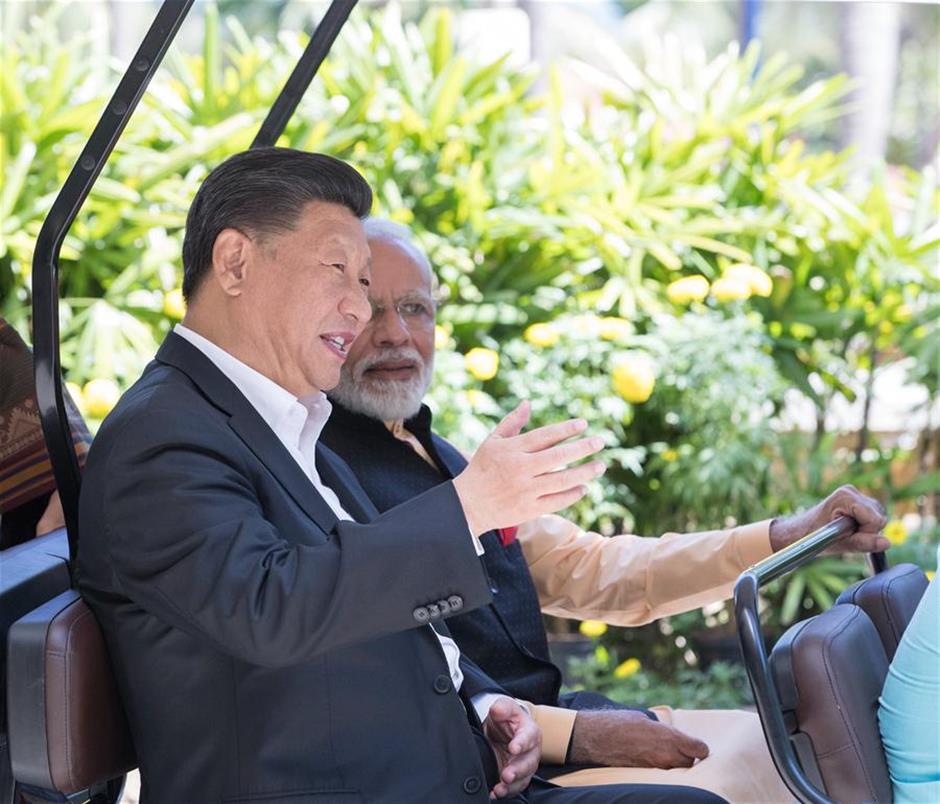 Xi made the following proposals.

From any point of view, China and India should be good neighbors who live in harmony and work together as good partners, Xi said, noting that realizing a scenario where the dragon and the elephant dance together is the only correct choice for the two countries and is also in the fundamental interests of both countries and peoples.

The two countries should and can embark on a broad road of friendly cooperation, he said, adding that they should correctly view their differences, and never let the differences dim the overall situation of bilateral cooperation.

At the same time, the Chinese president said, the two countries should gradually seek understanding through communication and constantly resolve their differences.

China hopes itself will develop well and wishes India the same, said the president, adding that the two countries should help each other to accomplish their respective goals and "brighten up" each other.

Xi said the two countries should focus on friendship and cooperation, dispel suspicions and doubts, and properly handle differences and sensitive issues.

To solve the boundary issue, the two countries should seek a solution that is fair, reasonable and acceptable to both sides, he said.

They should also prudently deal with issues concerning each other's core interests, and for problems that cannot be resolved at the moment, they should properly manage and control them, Xi said. 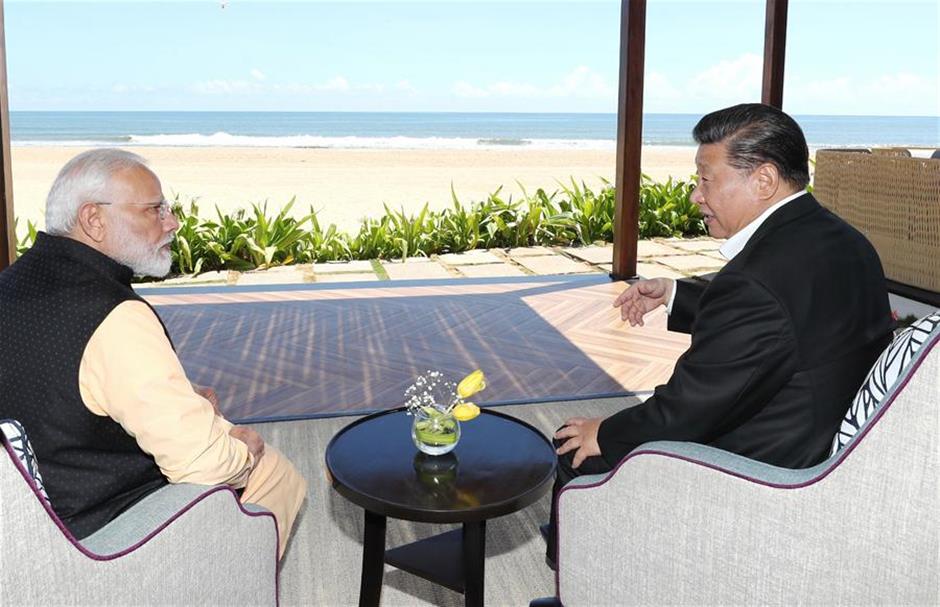 The two countries should take the establishment of a high-level economic and trade dialogue mechanism as an opportunity to strengthen the alignment of their economic development strategies, and seek to build a partnership in manufacturing industry, Xi said, while inviting Indian pharmaceutical and information technology companies to conduct investment and cooperation in China.

Fifth, they should enrich cultural and people-to-people exchanges and consolidate the foundation of friendship.

The two countries should make a success of next year's celebration of the 70th anniversary of their diplomatic relations and the activities marking the China-India year of cultural and people-to-people exchanges, he said.

Xi added that they need to support the establishment of friendly ties between China's Fujian Province and India's State of Tamil Nadu, as well as those between cities of Quanzhou and Chennai, to write a new chapter of the Maritime Silk Road.

Sixth, China and India should strengthen cooperation in international and regional affairs.

China and India, Xi said, should strengthen coordination within the framework of multilateral mechanisms including the G20, the BRICS, the Shanghai Cooperation Organization, and the China-Russia-India cooperation, and need to explore the gradual expansion of the "China-India Plus" cooperation to South Asia, Southeast Asia and Africa, create a more unobstructed regional connectivity network, and strike the Regional Comprehensive Economic Partnership (RCEP) agreement as early as possible.

Modi, for his part, said that under the current international situation filled with uncertainties, the efforts of India and China, two major ancient civilizations and developing countries, to strengthen communication, coordination and cooperation and to maintain steady development of bilateral ties bear positive and important significance to both countries and the world.

He called on the two countries to take account of each other's major concerns, properly manage, control and address differences, prevent differences from evolving into disputes, develop a closer partnership and usher in a new era of India-China relationship.

India and China, both in the process of national rejuvenation, are facing many similar challenges, he said, adding that India is willing to deepen and expand pragmatic cooperation with China, and learn from each other in their exchanges.

India thanks China for its increase of imports of Indian products such as rice and sugar, and is looking forward to fully utilizing the high-level economic and trade dialogue mechanism to promote a balanced and sustainable development of bilateral trade, said Modi, adding that India welcomes more Chinese enterprises to invest in its manufacturing and other industries.

Calling on the two countries to jointly make a success of the celebration events next year to mark their 70th anniversary of diplomatic ties, Modi said India also welcomes more Chinese tourists and hopes to carry out joint research on the long history of India-China exchanges.

Underlining the importance of safeguarding strategic independence of India, Modi said his country stands ready to enhance communication and coordination with China under multilateral frameworks, meet global challenges together and protect the legitimate rights of developing countries. 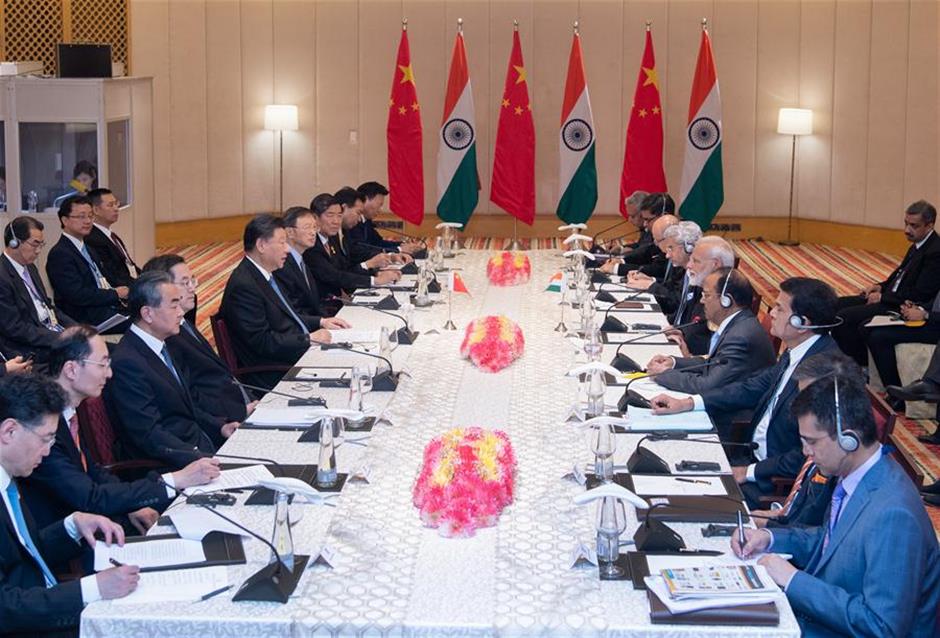 The prime minister also said India is willing to join hands with China to push for an RCEP agreement at an early date, and boost connectivity and anti-terror cooperation.

Wrapping up their meeting in Chennai, Xi said he and Modi have exchanged in-depth views on China-India relations in a comprehensive manner, improved mutual understanding and formed clearer goals and ideas.

The president said they will instruct relevant departments of both sides to implement the results of the meeting so as to open up new prospects of China-India cooperation.

Xi said he has received grand welcome and warm hospitality from the Indian government and people, and has felt the profound traditional friendship between the two peoples throughout the visit. He invited Modi for meetings in China again.

Modi, for his part, also spoke highly of the meeting, saying Xi and he have held extensive communication in a friendly atmosphere, consolidated their friendship, improved mutual understanding and trust, and forged closer connections between the two ancient civilizations.

Speaking highly of Xi's foresight and sagacity, as well as sincerity and pragmatism, Modi said India and China should not only face history, but also forge ahead to create a future, as the world peace and mankind's progress require the two countries' cooperation in the 21st century.

Noting that he attaches great importance to the friendship with Xi, Modi said he is willing to maintain such conducive and effective strategic communication with Xi and together create a beautiful future for India-China relations. The prime minister said he is also looking forward to meeting with Xi again in China.