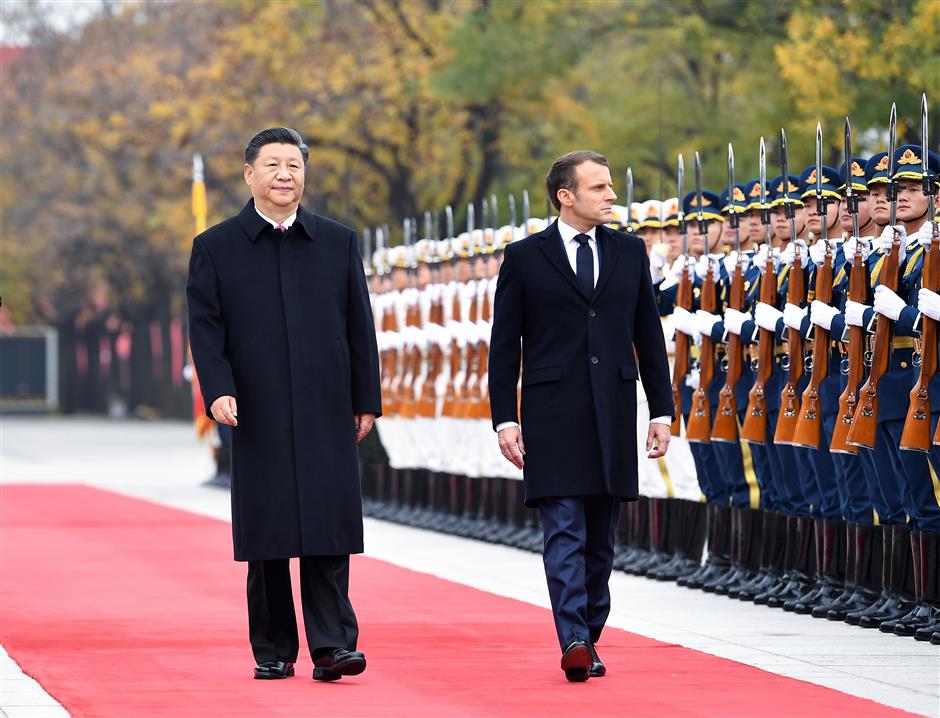 Deals were struck in the fields of aeronautics, energy and agriculture, including approval for 20 French companies to export poultry, beef and pork to China. They also agreed to expand a protocol for poultry exports reached this year to include duck and geese as well as foie gras, and to work on a protocol allowing France to export pig semen to China, said a statement from Macron’s office.

Among other deals, France’s Total will set up a joint venture with China’s Shenergy Group to distribute LNG by truck in the Yangtze River Delta. The two countries also agreed to reach an agreement by the end of January on the cost and location of a nuclear fuel reprocessing facility to be built by Orano, formerly known as Areva.

Chinese President Xi Jinping met Macron at the Great Hall of the People in Beijing.

He pledged to work jointly with Macron to further advance the China-France comprehensive strategic partnership, looking out on the world, the future and the people, and keep the partnership at the forefront of major-country relations.

Citing some successful projects including the No. 1 and No. 2 power units of Taishan nuclear power plant which have provided a successful model for the construction of third-generation nuclear power plants around the globe, Xi said the two countries have published the list of the second batch of industrial cooperation projects.

French companies are eagerly looking forward to taking the opportunity of China’s expanded opening-up, further entering into the Chinese market, expanding exports of agricultural products to China, and strengthening cooperation in areas such as aviation, aerospace, and civilian nuclear energy, as well as sci-tech innovation and finance, he said.

The Chinese government has just successfully issued 4 billion euro-denominated sovereign bonds in Paris. The two countries have also completed negotiations on an agreement of geographical indications between China and Europe.

The sovereign bonds is of great significance to France, Macron said, pledging to keep the French market open to Chinese companies. He said France is ready to advance the alignment of the BRI with the EU’s Euro-Asian connectivity strategy and jointly promote the green development of the Belt and Road.

The Chinese president called for further cooperation on large-scale projects, saying that China is ready to deepen the entire industrial chain cooperation with France in the nuclear energy field, encourage China’s enterprises to explore new cooperation with France not only within the two countries, but also in third-party markets, and strengthen joint research and development on nuclear base and high-tech technologies.

Xi said he hoped the new cooperation in aviation, aerospace and other fields could be well implemented.

He said he hoped that France will put into action its words of not adopting discriminatory policies against China.

“China is willing to import more high-quality and safe French agri-food products and carry out all-round agricultural cooperation in accordance with market demand,” Xi said, noting that more efforts should be made to strengthen exchanges and cooperation in the intellectual property rights field and support the early conclusion of an ambitious and balanced China-European Union investment agreement.

Xi Jinping and Macron both declared that the Paris climate pact was “irreversible,” showing a united front after Washington formally withdrew from the accord this week. The joint declaration came at the end of Macron’s visit to China, which started on Monday in Shanghai and included talks on trade and the Iranian nuclear issue.

Major powers expressed regret and concern after President Donald Trump went ahead with the pullout from the Paris accord despite mounting evidence of the reality and impact of climate change.

Washington presented its withdrawal letter to the United Nations on Monday, the first possible date under the accord negotiated by Trump’s predecessor Barack Obama, making the world’s largest economy the sole major outlier from the agreement.

Xi and Macron reaffirmed “their firm support for the Paris accord which they consider as an irreversible process and a compass for strong action on climate.”

“The isolated choice of one or another is not enough to change the course of the world. It only leads to marginalization,” Macron said.