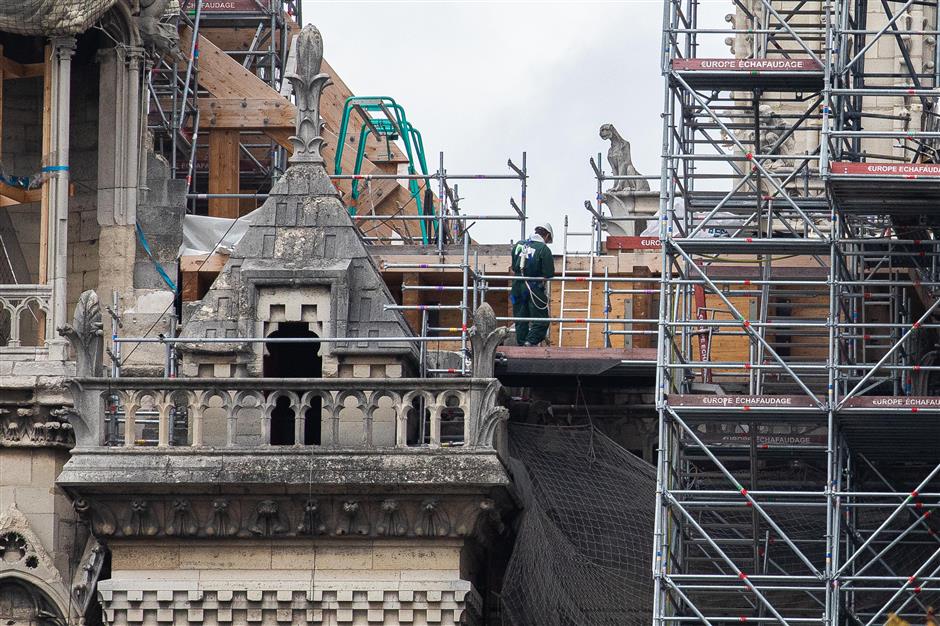 Workers are seen during preliminary work at the Notre Dame Cathedral six months after a fire caused significant damage, in Paris, France, October 24, 2019.

Chinese experts will participate in the restoration of France’s Notre-Dame cathedral, it was reported yesterday, following a meeting between the two countries’ heads of state in Beijing.

The 850-year-old cathedral, which was scarred in April after a fire tore through its roof and toppled its spire, was the most visited historic monument in Europe.

Since the blaze, which took 400 firefighters to control, Chinese and French authorities have been in touch about cooperating on restoration efforts, Xinhua news agency reported.

“China has a great deal of experience in renovating ancient buildings affected by fire, especially ones made of wood,” said Chai Xiaoming, director of the Chinese Academy of Cultural Heritage. “This means we could offer suggestions on how to approach the renovation of the oak-framed roof on Notre Dame Cathedral,” he said.

Citing a document signed by the two countries during President Emmanuel Macron’s visit to Beijing, Xinhua said Chinese experts will work with French teams in on-site restoration without elaborating.

“China and France will collaborate on the theme and model and select Chinese expert candidates for the cooperative restoration work in 2020,” it said.

The partial destruction of Notre-Dame sparked an outpouring of condolences around the world earlier this year, with Chinese President Xi Jinping calling the cathedral “an outstanding treasure of human civilization.”

Though its stained glass windows, towers, bells and most artworks and relics survived, reconstruction work to rebuild the 13th-century cathedral will take years.

It is only at the end of 2020 that a complete check will allow architects to work out how to restore the cathedral — and no reconstruction is expected to start before 2021.

In addition to Notre-Dame, the agreement signed yesterday will also see France and China collaborate on protecting China’s famous terracotta warriors in Xi’an.