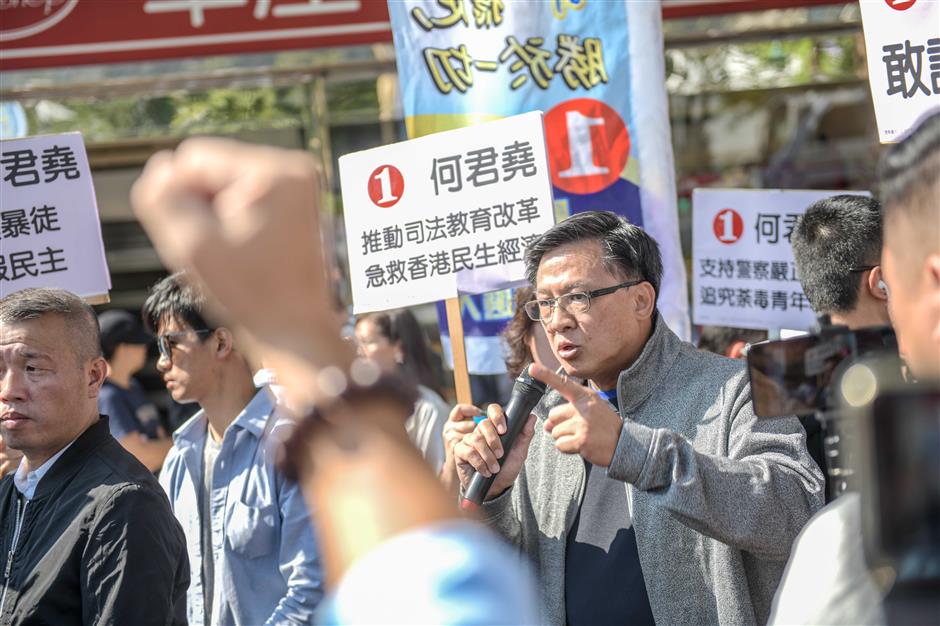 Hong Kong lawyer and politician Junius Ho delivers a speech as he returned to campaign for the district council election in Hong Kong yesterday. Ho was stabbed last week and has called for an end to violence in the city.

When Junius Ho reappeared at his street stand for election campaign yesterday, many Hong Kong residents gathered to cheer him on. The candidate of Hong Kong’s upcoming district council election was attacked and stabbed during campaigning days ago.

Gathering around Ho’s street stand yesterday, dozens of people chanted slogans in support of him, and held banners calling for end to violence and restoring peace in Hong Kong.

Ho, a member of the Legislative Council of China’s Hong Kong Special Administrative Region, was stabbed in the chest by a male with a knife in Tuen Mun district last week when he was campaigning for re-election in the district council. Two of his colleagues also sustained injuries in the attack.

Two days after being discharged from hospital, Ho returned to his street stand yesterday, telling his supporters that he would not be intimidated by the violent attack and would continue to serve the community.

Curbing violence and chaos is the top priority for Hong Kong at the moment, he said, pledging to stand out and take actions in this regard.

“I will fight to the end against those who want to mess with Hong Kong,” he said, appealing to electors to make a rational choice in the district council election and to make joint efforts to end the current unrest in Hong Kong.

Hailing Ho for his courage to speak up for the community, a Hong Kong resident surnamed Chan said that many people in Hong Kong share an abhorrence of the recent acts of violence and vandalism by rioters as well as a hope for strict law enforcement and restoration of social order.

The knife attack against Ho was not only a life-threatening crime but also blatant election violence, the 23-year-old man said, expressing hope that more people will heed Ho’s appeal and jointly bring back stability and prosperity to Hong Kong.

Several black-clad, masked young men tried to disturb Ho’s campaign yesterday, but were driven away by his supporters.

Ho is not the only candidate that fell victim to the election violence recently. On the same day when he was stabbed, a member of the Yau Tsim Mong District Council was beaten by violent radicals with sticks.

The district council election is scheduled for November 24.