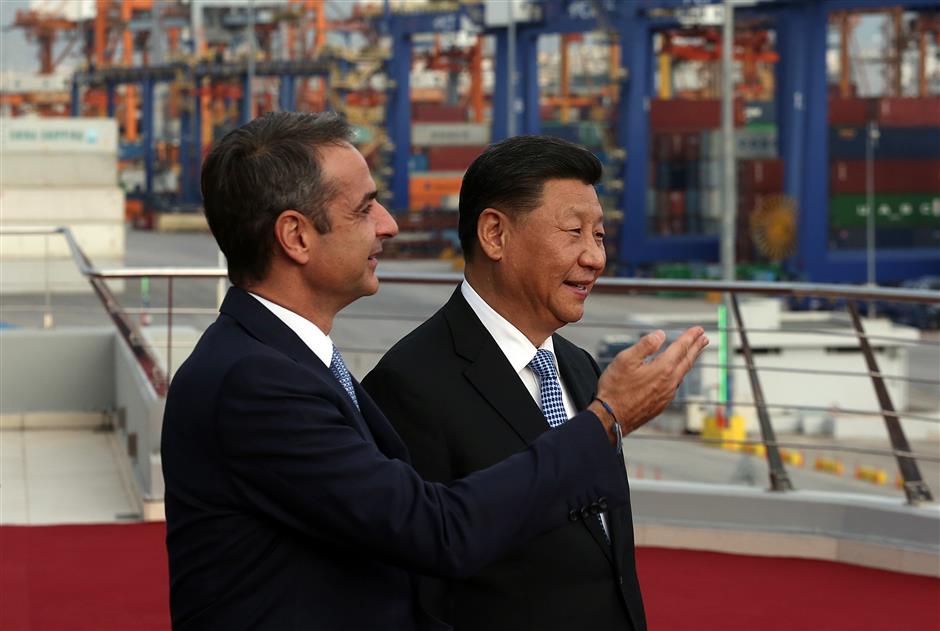 President of the Republic of China Xi Jinping (right) and Greek Prime Minister Kyriakos Mitsotakis visit the cargo terminal of Chinese company Cosco in the port of Piraeus, Greece, yesterday, as part of his official visit to Greece.

China and Greece agreed yesterday to push ahead with a 600-million-euros investment by COSCO Shipping into Greece’s largest port, Piraeus, as part of efforts to boost its role as a hub in rapidly growing trade between Asia and Europe.

The agreement, part of 16 trade deals signed between Greece and China, came during an official visit by Chinese President Xi Jinping to Athens yesterday.

President Xi’s three-day state visit was the first by a sitting Chinese president in 11 years.

The two countries have drawn closer since 2009 when COSCO won a 35-year concession to upgrade and run container cargo piers in Piraeus. COSCO Shipping bought a majority 51 percent stake in Piraeus port in 2016.

COSCO plans to turn Piraeus port into the biggest commercial harbor in Europe, spending about 600 million euros (US$660 million) to boost operations, including mandatory investments of 300 million euros by 2022, which, once concluded, will allow it to acquire an additional 16 percent stake in the port.

Xi met Greek Prime Minister Kyriakos Mitsotakis yesterday and the two countries signed a memorandum of understanding, stating their mutual will to overcome any obstacles in the implementation of COSCO’s investment in Piraeus, a Greek government official said.

Both sides sought to play up Greece’s strategic location at the crossroads of Europe, Asia and Africa, saying it could become a hub for channeling goods from the world’s second-largest economy and top exporter into Europe.

During a visit to Shanghai last week, Mitsotakis said he wanted Piraeus to become Europe’s No.1 port and that COSCO’s spending there could reach 1 billion euros.

The European Investment Bank yesterday agreed to extend a 140 million euro (US$154 million) loan to help COSCO with its investment plan in Piraeus.

A slew of inter-governmental agreements covering a wide range of fields have been signed, including a bilateral extradition bill, following Xi’s visit.

Xi said that China also wanted to expand its investments in the energy, transportation and banking sectors.

In the banking sector, Greece’s central bank Chief Yannis Stournaras met with executives of Industrial and Commercial Bank. The Bank of Greece has told the Chinese bank that it can set up a representative office in Greece. Another Chinese bank, Bank of China Europe, set up a branch in Athens this month.

Following Greece visit, Xi will attend the 11th BRICS summit from November 13 to 14 in Brasilia, Brazil.