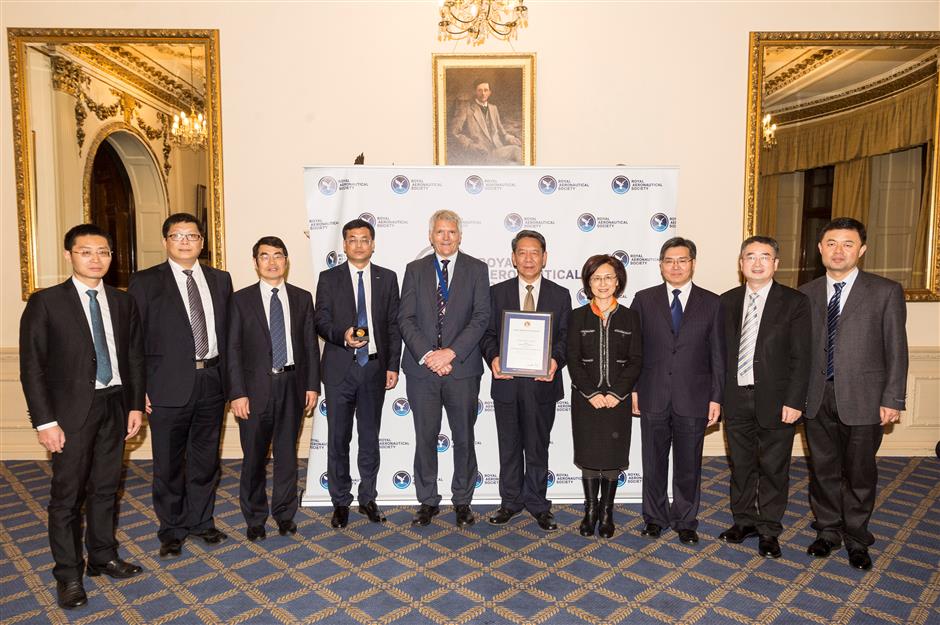 Members of China's Chang'e-4 mission team pose for a group photo with guests at the award ceremony of Royal Aeronautical Society (RAeS) in London on Nov. 25. China's Chang'e-4 mission team on Monday received the only Team Gold Medal of the year awarded by Royal Aeronautical Society (RAeS) of the United Kingdom at its annual award ceremony held in London.

China's Chang'e-4 mission team on Monday received the only Team Gold Medal of the year awarded by the Royal Aeronautical Society (RAeS) of the United Kingdom at its annual award ceremony held in London.

The Team Gold Medal, presented to the Chinese delegation led by Academician Wu Weiren, the chief designer of China's lunar exploration project, is the first award ever that was presented to a team from China by the RAeS since its inception more than 150 years ago.

Bill Tyack, chairman of the Medals and Awards Committee, called it an "outstanding achievement" by the Chang'e-4 mission team.

The team earned the Team Gold Medal "for its outstanding achievement of the first soft landing on the far side of the moon," said Tyack.

"Another first for the mission was the release of a piggyback microsatellite during the Earth-moon transfer orbit, which orbited the moon for astronomical observation," he said.

After the award ceremony, Wu expressed appreciation to the RAeS and the award committee, saying the award is "a testimony of increasing international recognition of China's lunar exploration project and its overall aerospace development."

Wang Chi, deputy chief designer of China's lunar exploration project, said Chang'e-5 is scheduled to be launched next year and is expected to bring back samples from the moon.

"In the future, we are planning to establish a scientific research station at the south pole of the moon to further explore the mystery of the moon," he told Xinhua. 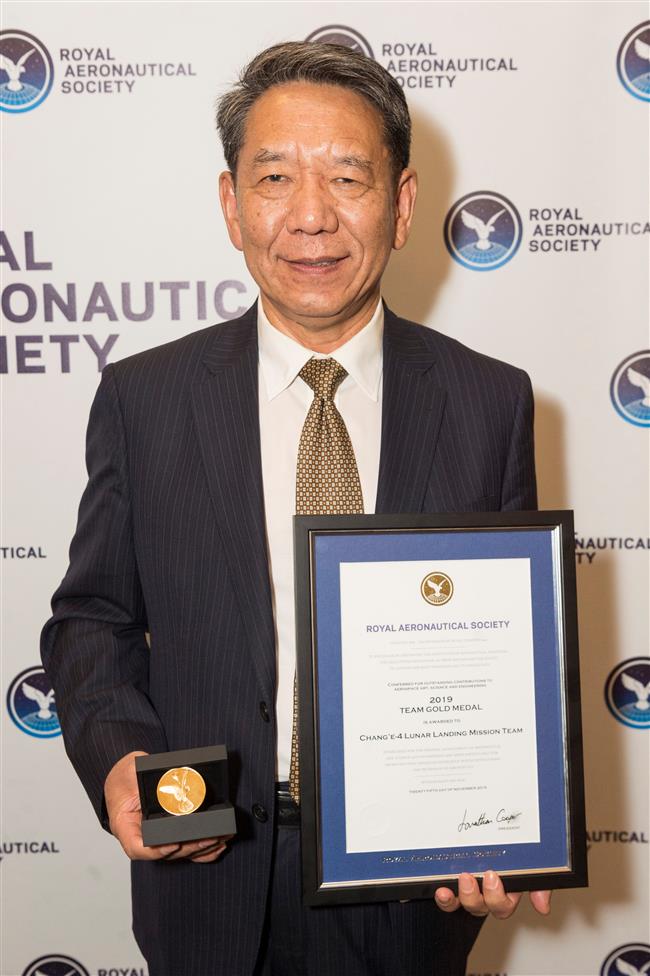 Wu Weiren, the chief designer of the lunar exploration project of China, presents the Team Gold Medal at the award ceremony of Royal Aeronautical Society (RAeS) in London on Nov. 25.

Awakened by sunlight, the lander and Yutu-2 (Jade Rabbit-2) rover of the Chang'e-4 probe have switched from dormant mode during the lunar night and resumed work for the 12th lunar day on the far side of the moon.

According to the China National Space Administration (CNSA), the lander has worked for more than 300 days, far beyond its design life, while the rover has traveled more than 300 meters despite the complexity of the topography on the far side of the moon.

The Chang'e-4 probe made the first-ever soft landing on the Von Karman Crater in the South Pole-Aitken Basin on the far side of the moon on Jan. 3, 2019. The complete success of the Chang'e-4 mission has created another milestone in the lunar exploration history of humankind.

The Chang'e-4 mission has accomplished a series of important scientific discoveries and acquired geographic information on, among others, the topography, structure and composition of the landing area.

It has also made discoveries which are of great scientific value for revealing the geographic evolution of the South Pole-Aitken Basin and early evolutionary history of the lunar crust. In addition, the mission has collected a lot of data and initial findings in areas such as neutral atoms, neutrons on the lunar surface and low-frequency radio spectrums.

Led by the CNSA, the Chang'e-4 mission involves tens of thousands of scientists and engineers from across China, as well as other team members from such countries as Germany, Sweden, the Netherlands, Saudi Arabia, Russia and Argentina. The Chang'e-4 probe was launched on Dec. 8, 2018. It took six years for its research, production and launching preparation.

The Chang'e-4 mission is another successful example of China's adherence to the principle of the peaceful use of outer space. The CNSA said it will adhere to the principle of "co-consulting, co-constructing and co-sharing," strengthen cooperation and exchanges with more countries and organizations, explore more international cooperation models, and contribute more to space exploration and scientific discoveries.

Founded in 1866, the RAeS is one of the oldest aeronautical societies in the world. The annual awards honor outstanding teams and individuals worldwide in the field of aerospace studies and exploration.