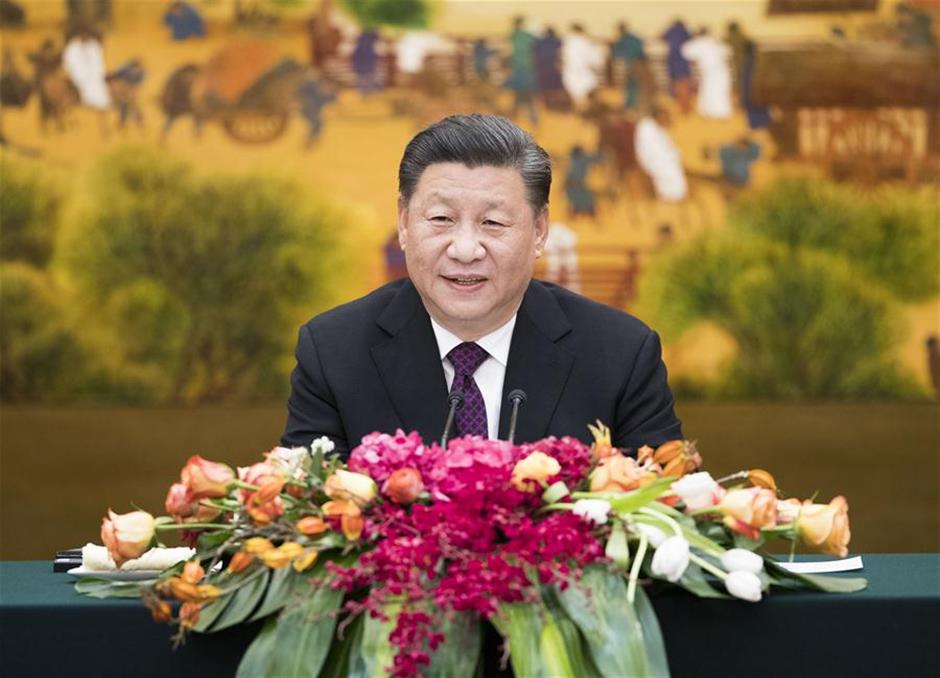 Chinese President Xi Jinping meets with foreign delegates who were in China to attend the 2019 Imperial Springs International Forum at the Great Hall of the People in Beijing, capital of China, December 3, 2019.

Chinese President Xi Jinping said on Tuesday that all countries should shoulder their respective responsibilities, carry out constructive dialogue, seek common ground while shelving differences, and uphold multilateralism, to build a community with a shared future for humanity.

Xi made the remarks when meeting in Beijing with foreign attendees to the 2019 Imperial Springs International Forum held in Guangzhou, south China's Guangdong Province, on December 1 to 2.

The international order is now at a critical crossroads, as the world is facing a choice of either multilateralism or unilateralism, Xi said.

He noted that although the current international order is not perfect, it can be carefully maintained with reforms and improvement, instead of being scrapped or started all over again.

As the world is undergoing profound changes rarely seen in a century, the relations between China and the rest of the world are also experiencing historic changes, the Chinese president said.

"As a big nation with a population of nearly 1.4 billion, China can make the biggest contribution to human society by running its own affairs well," he said. "We are also willing to shoulder our due international obligations and responsibilities."

Xi briefed the delegates on China's state governance as well as his opinions on the current international situation.

He said upholding the path of socialism with Chinese characteristics is the fundamental reason why the People's Republic of China had achieved continuous development and stability over the past 70 years.

"We will unswervingly continue down the path that we have chosen," he said, reiterating the country's commitment to reform and opening up and expressing his full confidence in China's future.

China has always maintained that people of various countries have the right to choose a development path that suits their own national conditions. No country or nation could achieve its development and prosperity through copying others', nor is there a particular path that could guide all countries and nations towards prosperity, he noted.

China is determined to prove with its own practice that a strong nation is not necessarily a hegemony, and this is decided, first and foremost, by China's 5,000-year historical and cultural tradition, which advocates the ideal of "pursuing a just cause for the common good," instead of I-win-you-lose zero-sum games, Xi said.

He said China is committed to maintaining equality and mutual benefit in international relations, increasing mutual understanding and carrying out mutually beneficial cooperation with all countries for the joint building of a community with a shared future for humanity.

They expressed the hope that China will continue playing a key leading role in tackling global challenges, including climate change.

They told Xi that the world needs to uphold multilateralism, improve global governance, and build a more just, fair and diversified international order.

The foreign delegates also pledged to work with China to uphold multilateralism, and jointly build the Belt and Road as well as a new type of international relations featuring mutual respect and win-win cooperation.