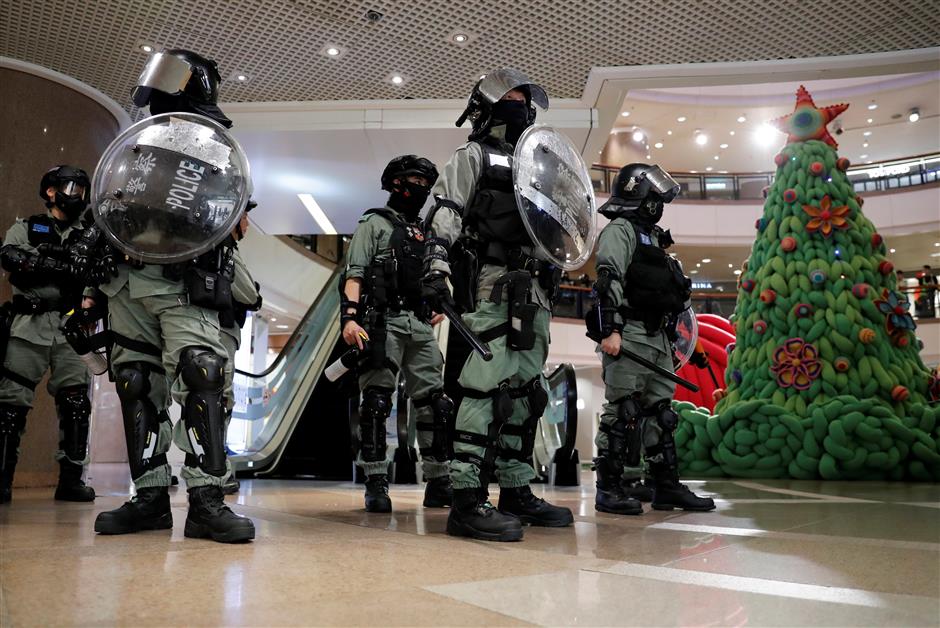 Riot police stand guard next to a Christmas tree inside a shopping mall during an anti-government protest on Christmas Eve at Tsim Sha Tsui in Hong Kong on Tuesday.

A government spokesperson made the comment in a release issued late on Tuesday after masked rioters staged flashmob rallies across districts in Hong Kong, setting up barricades, trashing shops and banks, setting fire and clashing with the police.

“These acts seriously disrupted social order, affected the festive mood and obstructed other people from enjoying the festive season, which are outrageous,” the spokesperson responded.

The spokesperson meanwhile denounced the move of some protesters advocating “Hong Kong independence,” saying it’s inconsistent with the constitutional and legal status of HKSAR as stipulated in the Basic Law and not conducive to the overall and long-term interest of Hong Kong society.

He also urged the police to enforce the law strictly and resolutely.

Dispersal operation was conducted throughout the night with pepper spray and tear gas fired. Police also faced off violent protesters in the streets and shopping malls.

Two main MTR stations of Tsim Sha Tsui, Mong Kok were also shut on Tuesday night due to protests in the area.

By yesterday morning, Tsim Sha Tsui station has been reopened to the public while the other remains closed.