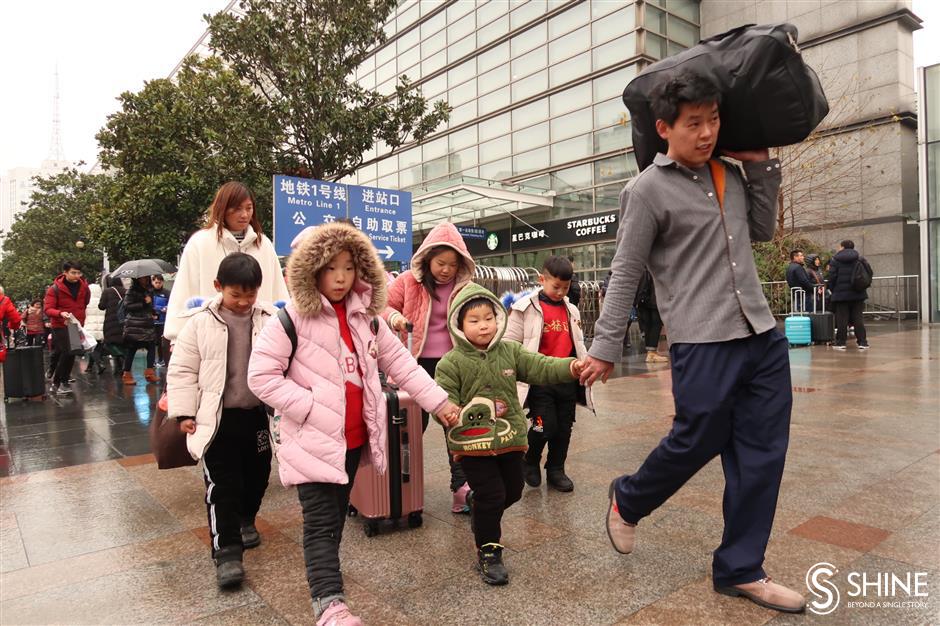 China, the world's most populated country, on Friday ushered in its largest annual migration, 15 days ahead of the Spring Festival, or the Lunar New Year.

There will be three billion trips during the travel rush from January 10 to February 18 for family reunions and travel, slightly up from that of last year, according to a forecast from the National Development and Reform Commission.

The 40-day travel rush is known as chunyun in Chinese. The Lunar New Year falls on January 25 this year, earlier than previous years, which brings a bigger challenge to the transport system as the return trips of college students overlap with the travel rush.

Over 300 million train tickets have been sold for the Spring Festival travel rush after the presale started on December 12, 2019, said China's railway operator.

With the operation of a new airport and several new high-speed railways, travel through China's capital city of Beijing has become more convenient.

Flights to hot domestic destinations from the Beijing Capital International Airport are northeast Chinese cities famous for ice and snow tourism and southern vacation cities which enjoy warm weather in winter. While Japan and Southeast Asian countries are popular destinations for outbound tourists.

The Daxing International Airport mainly handles flights to hot domestic tourist destinations during the Spring Festival travel rush, including Chengdu, Guangzhou, Zhanjiang, Sanya, Kunming and Lijiang cities. More than 1.9 million passenger trips are expected via the airport during the period.

In addition to the new air hub, the Spring Festival travel rush is also the first major test for the high-speed railway service connecting Beijing and Zhangjiakou, which has been in operation for only 20 days.

The train service reduces the travel time between Beijing and Zhangjiakou from over three hours to 47 minutes.

The company's data showed that the majority of ticket buyers were born between 1980 and 1999.

It monitored that the travel rush will witness the first peak time of passenger flow on Jan. 21 and a reverse flow peak on Jan. 30 and Feb. 9, respectively.

Two-thirds of the tourists who placed their orders on Trip.com will travel with their children or parents for the festival, a traditional occasion for family get-togethers.

NDRC's forecast said due to the continued expansion in high-speed railway operational length, the number of road trips is expected to decline during the festival travel.

China's high-speed railway network tops the world with an estimated length of 35,000 km by the end of 2019, according to China Railway. Bullet trains handled 2.31 billion passenger trips in 2019, representing a 3.4-fold increase from 2012.

"It has become more convenient to buy tickets nowadays," said a passenger surnamed Li at the Guangzhou railway station in southern China. Li is from central China's Hunan Province and has been working in Guangzhou for 12 years.

This year, the hours of China's online ticket system have been extended by 30 minutes each day of the Spring Festival travel rush from 6 a.m. to 11:30 p.m., and purchases may be verified by facial recognition.

"In the past, the ticket hall was packed solid with people just waiting to get a ticket home, and platforms were also filled to the limit with passengers," Li said.

To accommodate the large crowd during the rush, Guangzhou railway station expanded the waiting areas by over 4,000 square meters.

E-ticket services have also covered almost all high-speed and intercity rail in China beginning this year, so passengers will not need to collect paper tickets before their trip, according to Li Wenxin, vice general manager of China State Railway Group Co., Ltd.

"We had to arrive about half an hour earlier for an inevitable line at the ticket machines in the past, but now it's much easier to just swipe our ID card," said Wen Hongxue, a passenger at the Guangzhou railway station.

Reverse chunyun on the rise

Instead of waiting for his son to return home on Chinese New Year's Eve, Hu Hongbo booked a 13-hour train to travel to the southern boomtown of Shenzhen, where his son and daughter-in-law work as bus drivers.

The Spring Festival travel rush appeared in the 1980s after rural laborers flocked into cities to find jobs. They could afford the time and money to go back home once a year for the Spring Festival family reunion.

However, a reverse trend has emerged with increasing family gatherings in big cities, as the trips from urban workers' hometowns to big cities ahead of the festival are on the rise.

Recent statistics from Trip.com showed that the platform's transportation orders to big cities such as Beijing, Shanghai and Guangzhou one week prior to the Spring Festival have more than doubled year on year.

Last year, China's Ministry of Transport noted that "obvious signs" of reversing chunyun have appeared. An official document released by the national economic planner in December said reverse chunyun would be encouraged this year.

Analysts say some have chosen to avoid the peak traveling season that drives up ticket prices, and urban workers can reunite with their families in the cities for sightseeing.

In Hu's case, he brought with him six baskets of local specialties that are not commonly found in Shenzhen, as he plans to use them for preparing an authentic local family reunion dinner for his son and daughter-in-law.

"They cannot return home due to work, but I can come to them," Hu said.