Epidemic hitting a peak, could be over by April, says top China expert 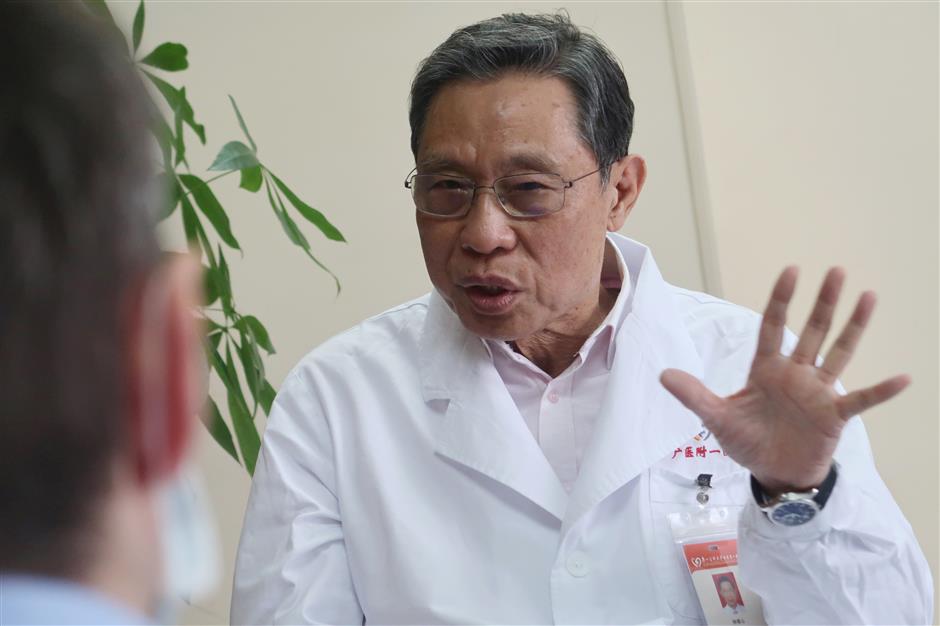 The novel coronavirus outbreak is hitting a peak in China this month and may be over by April, the government’s senior medical adviser said yesterday, in the latest assessment of an epidemic that has rattled the world.

In an interview, Zhong Nanshan, an 83-year-old epidemiologist who won fame for combating the SARS epidemic in 2003, said he was optimistic the new outbreak would soon slow, with the number of new cases already declining in some places.

The peak should come in the middle or late February, followed by a plateau and decrease, Zhong said, basing the forecast on mathematical modelling, recent events and government action.

“I hope this outbreak or this event may be over in something like April,” he said at a hospital run by Guangzhou Medical University, where 11 coronavirus patients were being treated.

Though his comments may soothe some global anxiety over the coronavirus — which has killed more than 1,000 people and seen more than 40,000 cases, almost all in China — Zhong’s previous forecast of an earlier peak turned out to be premature.

“We don’t know why it’s so contagious, so that’s a big problem,” added Zhong, who helped identify flaws in China’s emergency response systems during the 2002-03 SARS crisis.

He said there was a gradual reduction in new cases in the southern province of Guangdong where he was, and also in eastern Zhejiang Province and elsewhere. “So that’s good news for us.”

With China taking unprecedented measures to seal infected regions and limit transmission routes, Zhong applauded the government for locking down Wuhan, the city at the epicenter which he said lost control of the virus at an early stage.

“The local government, local healthcare authority should have some responsibility on this. Their work had not been done well.”

The virus is believed to have originated in a seafood market in Wuhan in early December.

Zhong shed tears about Li Wenliang, a doctor who died last week after being reprimanded for raising the alarm.

Li, who was detained for publicizing the disease before it was officially recognized, became its best-known fatality last Friday.

“The majority of the people think he’s the hero of China,” Zhong said, wiping tears. “I’m so proud of him, he told people the truth, at the end of December, and then he passed away.”

Behind him stood hundreds of doctors all wanting to tell the truth and now being encouraged by the government to do so, he said. “We really need to listen.”

The virus has now infected more than 40,000 people on the Chinese mainland and spread to at least 24 countries.

Zhong, who said the government’s unwillingness to share information prolonged the severe acute respiratory syndrome crisis, said China had done much better this time on issues like transparency and cooperating with the World Health Organization.

But more should be done, he said, including an end to wildlife trade, better international cooperation on hygiene technology, improved operation of disease control centers, and a global “sentry” system to warn of potential epidemics.

“If we have better cooperation and coordination, we can find it earlier and figure out the human-to-human transmission earlier,” he said, adding that the outbreak would not be quite so serious if such a system was in place.

So far, China’s data shows the recovery rate to be quite low, with less than 10 percent of confirmed patients discharged, but Zhong said authorities were leaving nothing to chance, with many patients still quarantined in wards now reasonably healthy.

“They didn’t know if they were going to re-infect or not... so that’s why the cure rate up to now is not that high.”

Wearing masks outside contagion zones was not always necessary, he said, and the United States’ and others’ entry ban on Chinese was an over-reaction. Furthermore, it appeared children were less vulnerable.

“I think maybe we should be going closer, I mean in particular our colleagues and scientists, and have more cooperation,” he said. “We’re just dealing with the disease — nothing to do with the political, nothing.”