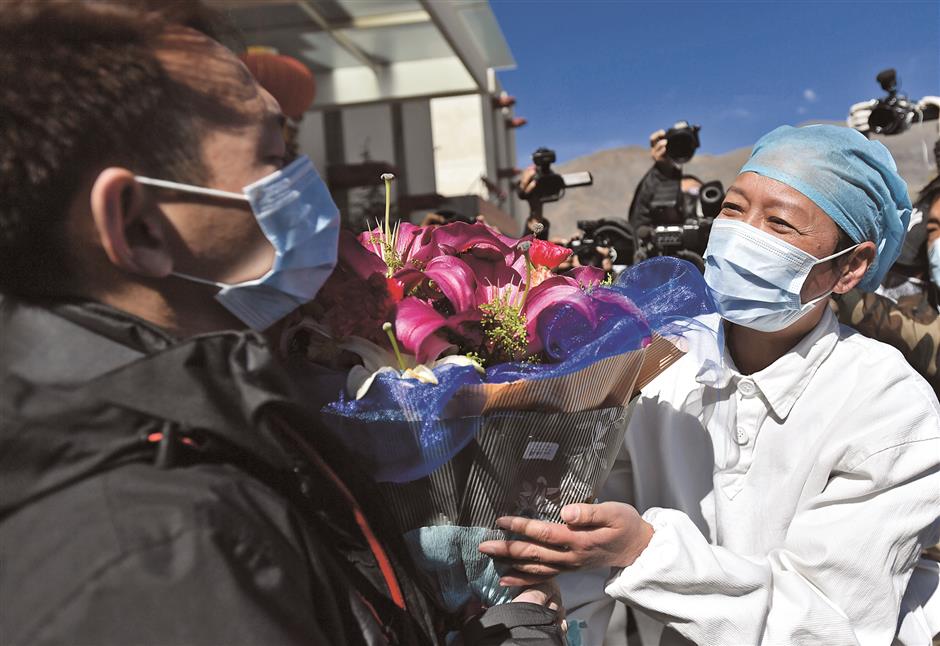 A cured patient (left) receives a bouquet of flowers from medical staff at the Third People’s Hospital of Tibet in Lhasa, capital of southwest China’s Tibet Autonomous Region, yesterday. The only patient infected with the novel coronavirus in the region was discharged from hospital yesterday afternoon, following an 18-day treatment. The 34-year-old patient is from Suizhou, a city in central China’s hardest-hit Hubei Province. He had traveled from Wuhan, capital of Hubei and the epicenter of the outbreak, to Lhasa by train from January 22 to 24. As of Tuesday, Tibet had not reported any new or suspected cases or deaths caused by the virus for the 13th consecutive day. Meanwhile, China reported its lowest number of new coronavirus cases in nearly two weeks yesterday, lending weight to a forecast by its foremost medical adviser, Zhong Nanshan, for the outbreak to end by April.

China yesterday reported its lowest number of new coronavirus cases in nearly two weeks, lending weight to a forecast by its foremost medical adviser for the outbreak to end by April.

The 2,015 new cases took China’s total to 44,653. That was the lowest daily rise since January 30 and came a day after Zhong Nanshan forecast the epidemic would peak this month before subsiding.

His comments gave some balm to public fears and to markets, where global stocks surged to record highs on hopes of an end to disruption in the world’s second largest economy.

The proportion of patients who recovered from the virus in China had increased to 10.6 percent on Tuesday from the lowest 1.3 percent on January 27, Mi Feng, an official with the National Health Commission, said yesterday.

Outside Hubei Province, the epicenter, China’s new confirmed cases have been falling for eight straight days, the NHC said.

But an expert with the World Health Organization said that while it may be peaking in China, this was not the case beyond.

“It has spread to other places where it’s the beginning of the outbreak,” Dale Fisher, head of the Global Outbreak Alert and Response Network coordinated by the WHO, said.

“In Singapore, we are at the beginning of the outbreak.”

Singapore has 47 cases. Its biggest bank, DBS, evacuated 300 staff yesterday after a case at its head office.

Hundreds of infections have been reported in dozens of other countries, but only two people have died outside China’s mainland: one in Hong Kong and another in the Philippines.

Xinhua news agency called the epidemic a “battle that has no gunpowder smoke.”

A Xinhua commentary chided some Western media for “racist reporting” on the coronarivus.

“These sensational and unfounded allegations from a few Western media outlets have turned a blind eye to the unswerving efforts and huge sacrifice China and its people have made,” it said. “Just as the H1N1 influenza outbreak in the US in 2009 should not be called an ‘American virus,’ the NCP (novel coronavirus pneumonia) is neither a ‘China virus’ nor ‘Wuhan virus.’”