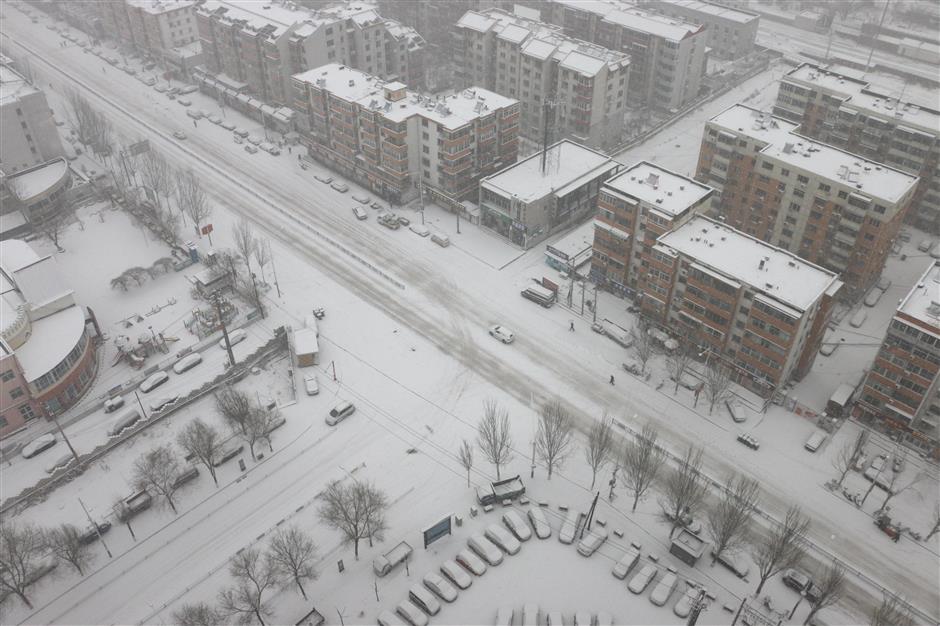 Buildings and streets are covered in snow in Chengde City, Hebei Province, on February 14, 2020.

China's meteorological authority on Friday issued four different weather alerts for cold front, fog, snow and severe convection as cold weather is set to sweep across the central and eastern regions of the country over the next few days.

Affected by the cold front, temperatures are expected to fall by 8 to 10 degrees Celsius in central and eastern China, of which some areas are likely to see a decrease of up to 16 degrees, the National Meteorological Center said in a statement on its website.

From Friday to Saturday, heavy snow is expected to hit parts of northern and northeastern China, the NMC said, noting that in some areas of Hebei, Liaoning and Shandong provinces, snowfall may reach a depth of up to 16 cm.

The observatory also warned of thick fog in the provinces of Jiangsu, Anhui, Zhejiang and Hunan, as well as Shanghai municipality, on Friday morning, with visibility in parts of these regions reduced to less than 200 meters.

Meanwhile, severe convection weather including thunderstorms and hailstorms is expected for some central and southern regions from Friday to Saturday.

The NMC urged local departments to strengthen supervision and maintenance of roads, railways and telecom infrastructure and advised the public to take precautions against the cold weather and reduce outdoor activities.