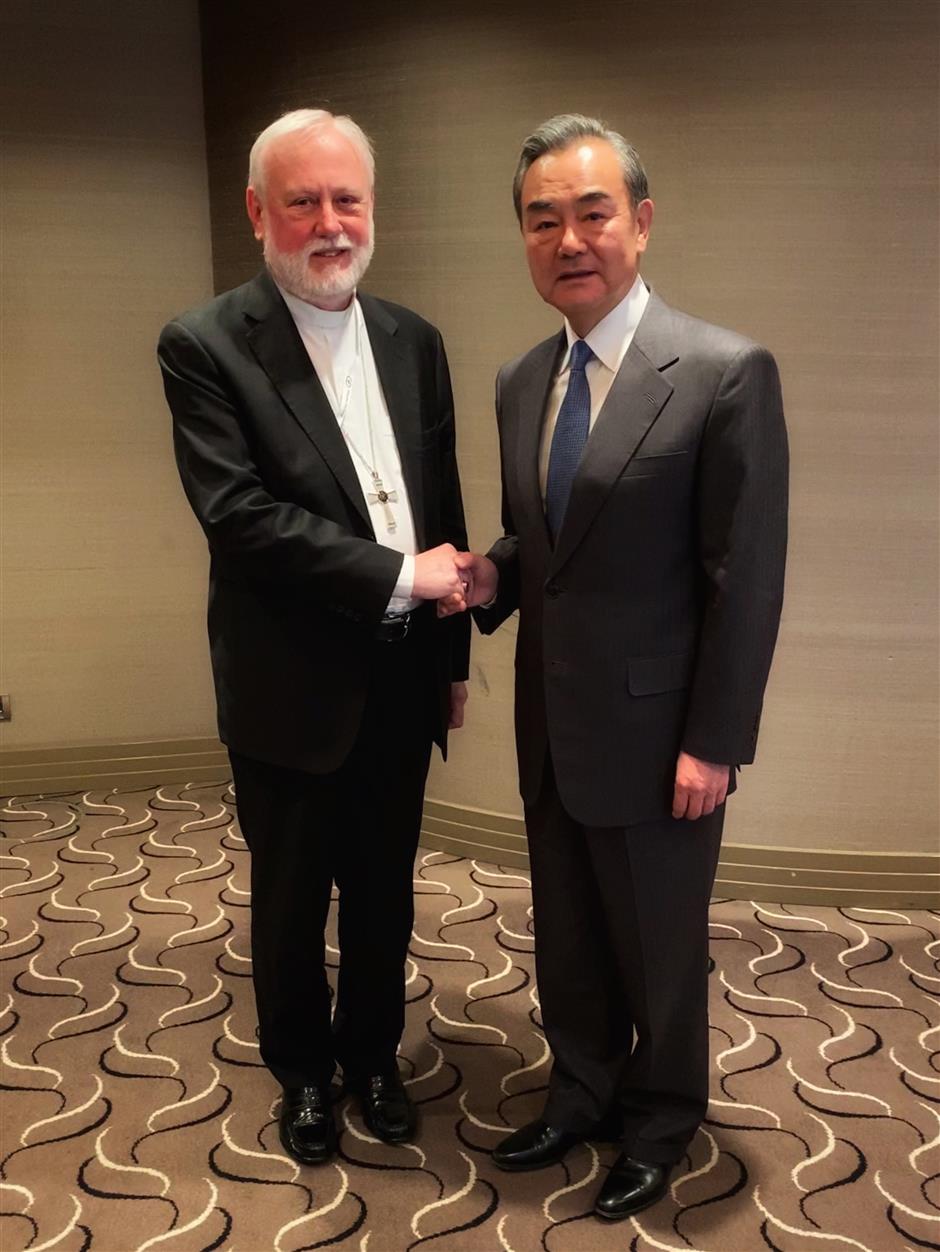 This handout photograph taken on February 14, 2020, and released by the Vatican Media shows Vatican's Secretary for Relations with States Paul Gallagher (left) shaking hands with Chinese Foreign Minister Wang Yi on the sidelines of the Munich 2020 security conference in Munich.

Chinese State Councilor and Foreign Minister Wang Yi met with Vatican's Secretary for Relations with States Paul Gallagher on Friday on the sidelines of the 56th Munich Security Conference.

Referring to the critical moment when China is fighting the novel coronavirus epidemic, Gallagher, on behalf of Pope Francis and Vatican's secretary of state, conveyed the Holy See's respect and support for China.

China has the wisdom and courage to defeat the epidemic at an early date, he added.

Pope Francis is familiar with China and the exchanges between the two sides, he said, adding that the provisional agreement on the appointment of bishops signed by the two sides in 2018 is of great importance, which is conducive to promoting the well-being of Catholics and the Chinese people as well as world peace.

For his part, Wang expressed his gratitude to Gallagher for conveying the sympathy of the Holy See.

Wang said that the virus is a common enemy of mankind and the international community should join hands to deal with it.

The current outbreak has been effectively controlled, he said, adding that China, a big country with a civilization of 5,000 years, has experienced various trials and tribulations in history.

The Chinese foreign minister said that the Chinese side believes that the Vatican side will play a constructive role in prompting the international community to support and cooperate with China's efforts to combat the epidemic in an objective, rational and scientific manner and jointly safeguard global health security.

Noting that Pope Francis has publicly expressed his love and blessing for China on various occasions, Wang said that today marks the first meeting between the foreign ministers of China and the Vatican.

This is the continuation of China-Vatican exchanges over time and will open up more space for bilateral exchanges in the future, he added.

Wang said that the provisional agreement on the appointment of bishops is a pioneering practice and has yielded positive results, adding that China stands ready to further enhance understanding, build mutual trust and push forward the momentum of positive interaction between the two sides.

During the meeting, the two sides also agreed that they should bear in mind a bigger picture and work together to promote mutual respect and mutual learning among different civilizations so as to create a peaceful world.