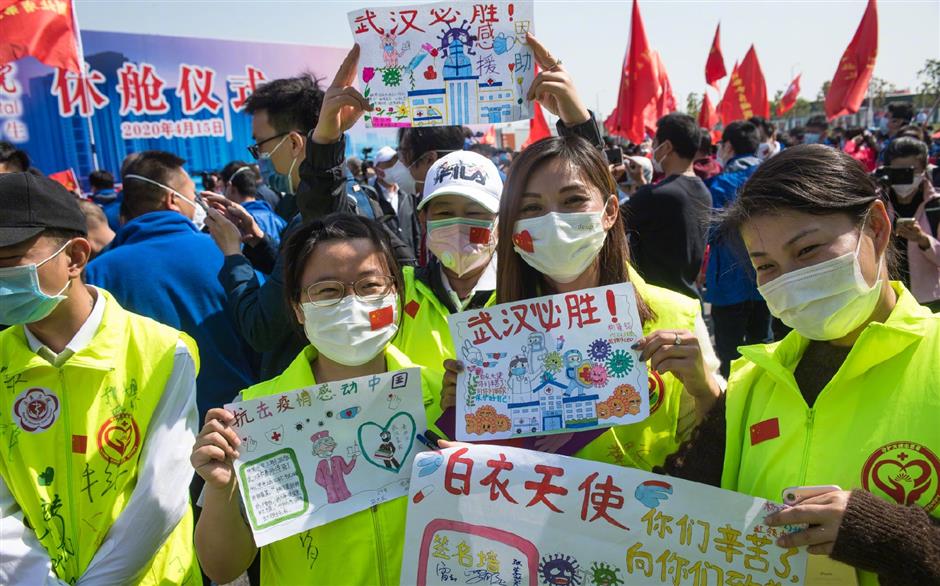 Volunteers celebrate the closing of Leishenshan Hospital in Wuhan on April 15, 2020.

A makeshift hospital ceased operation in Wuhan, capital of central China's Hubei Province, on Wednesday as the coronavirus epidemic wanes.

At the closing ceremony, doctors and nurses waved flags and wrote their names on the clothes of their colleagues for memory.

"We hope that the hospital will never restart operations," a local district official told an applauding crowd.

After the closing ceremony, medical workers were seen disinfecting and sealing the remaining wards. 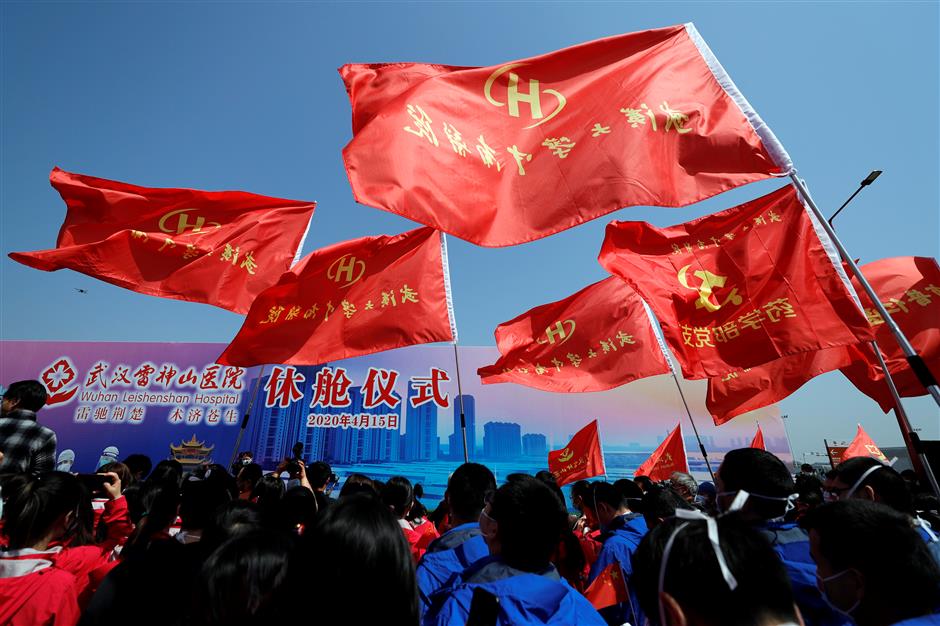 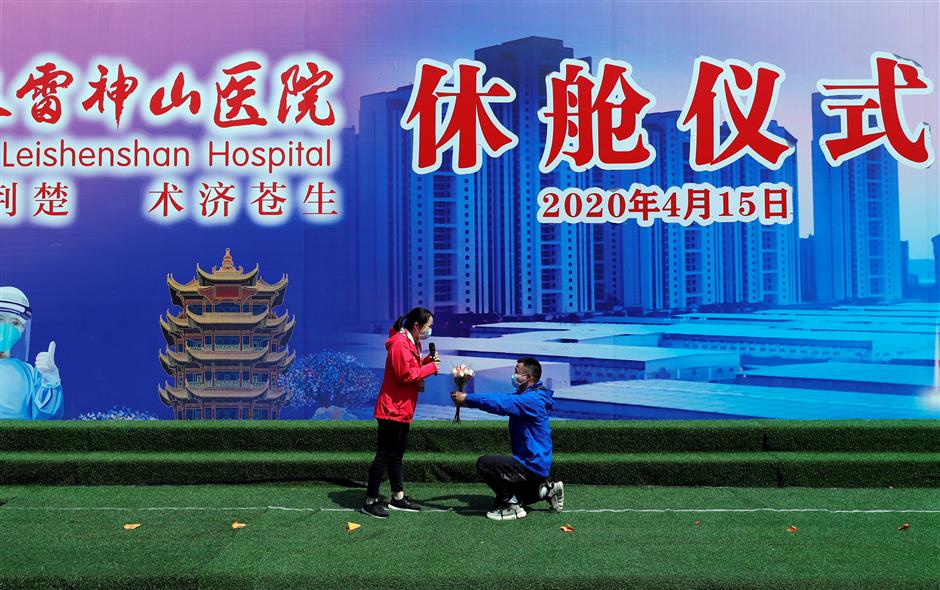 A male nurse expresses his love to his colleague at the closing ceremony.

Wang Xinghuan, head of the hospital, said they worked hard to achieve a low mortality rate of 2.3 percent among its patients, 45 percent of whom were in severe or critical conditions.

The 1,600-bed hospital is managed by the Wuhan-based Zhongnan Hospital of Wuhan University with over 3,000 medics from nine provincial regions in China. A total of 2,011 patients have been treated there.

"After Leishenshan was built, I can see the efforts to increase beds and the support coming from across the nation," said Fang Yanhong, a nurse with the hospital.

The retirement of the hospital is a landmark development in Wuhan's months-long battle with the epidemic, indicating the city's COVID-19 treatment and medical operations are "back on the normal track," Jiao Yahui, an official with the National Health Commission, told Xinhua. 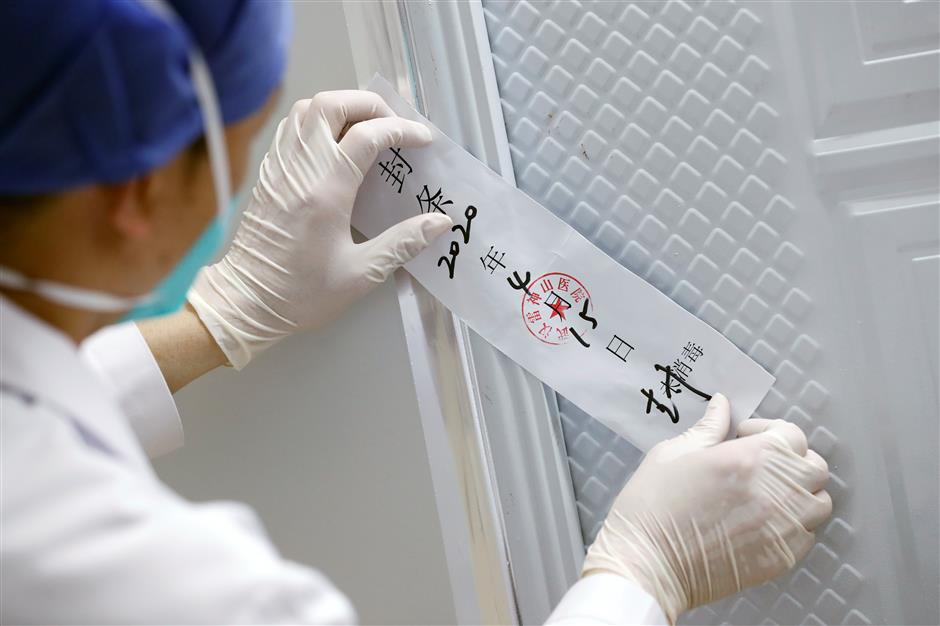 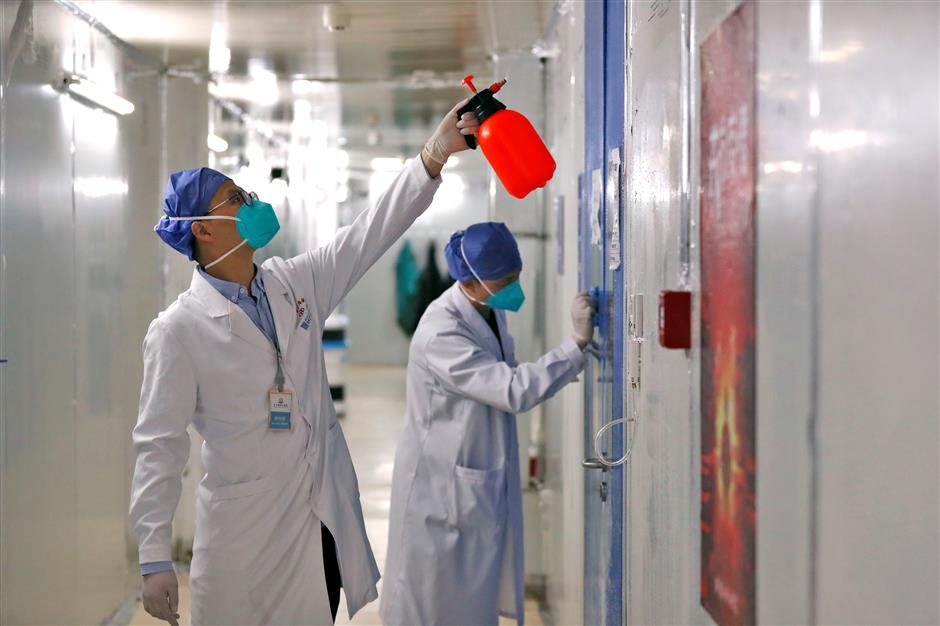 Medical workers are disinfecting and sealing the wards.

Jiao said the medical facility was built at a time when "medical resources were in the shortest supply."

It has played a very important role, enabling the city to admit more patients in a short period of time, thus helping contain the source of infection, she said.

The official said there is no timetable for dismantling the Leishenshan Hospital, noting it could be reactivated at any time.

Jiao also highlighted the importance of transferring patients from the two makeshift hospitals - Huoshenshan and Leishenshan - to four large hospitals in Wuhan.

"We hope to secure the patients the most effective treatment by placing them at the four hospitals with high-quality medical resources in the city," Jiao said, adding that the treatment of the severe and critical cases remained difficult. 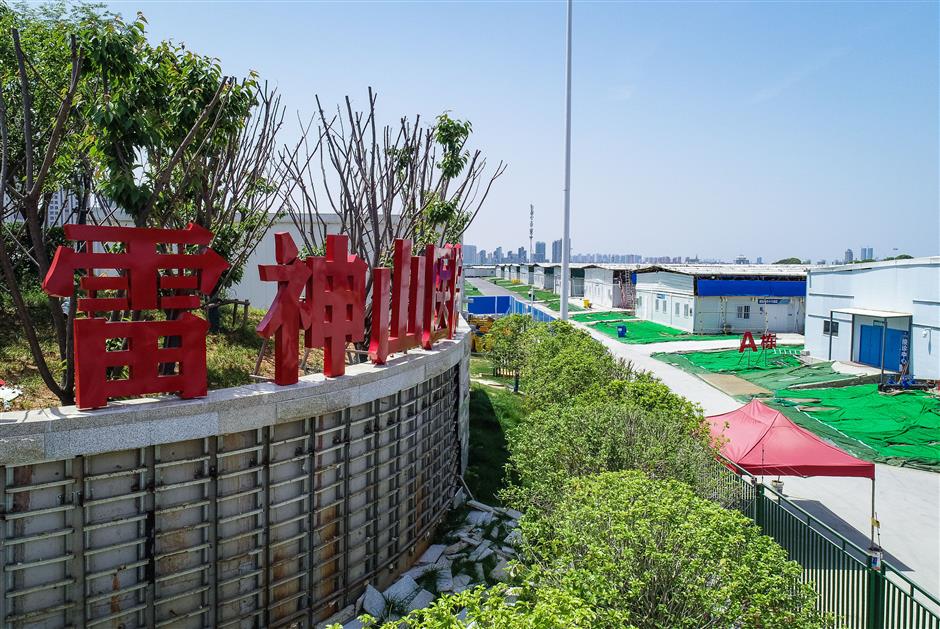 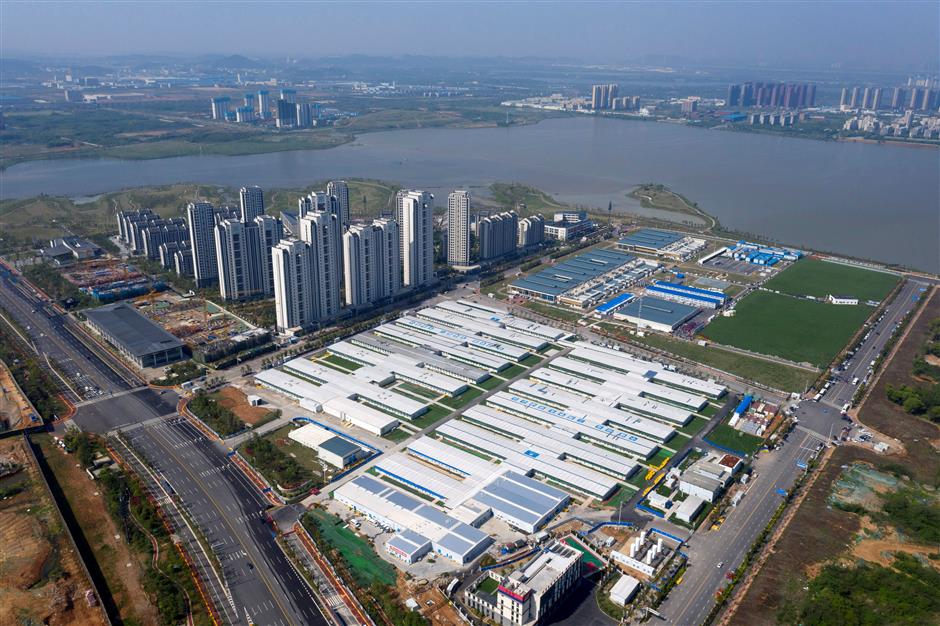 An aerial view of Leishenshan Hospital

"The ICU wards here are well equipped with ventilators, monitors and hemodialysis devices. CT and chest radiography were also introduced into the hospital upon its establishment," said the 31-year-old doctor. "The hospital is particularly good at hemodialysis, which is managed by a team of non-local medics who came to support Wuhan."

However, Yang said "as a temporary hospital, Leishenshan could not compete with large comprehensive hospitals in terms of testing capacity and medicine inventory. So transferring the patients (to large hospitals) will benefit their treatment."

Having worked in Leishenshan for over 20 days, the young doctor said the work there has been hectic and full of life-and-death moments. 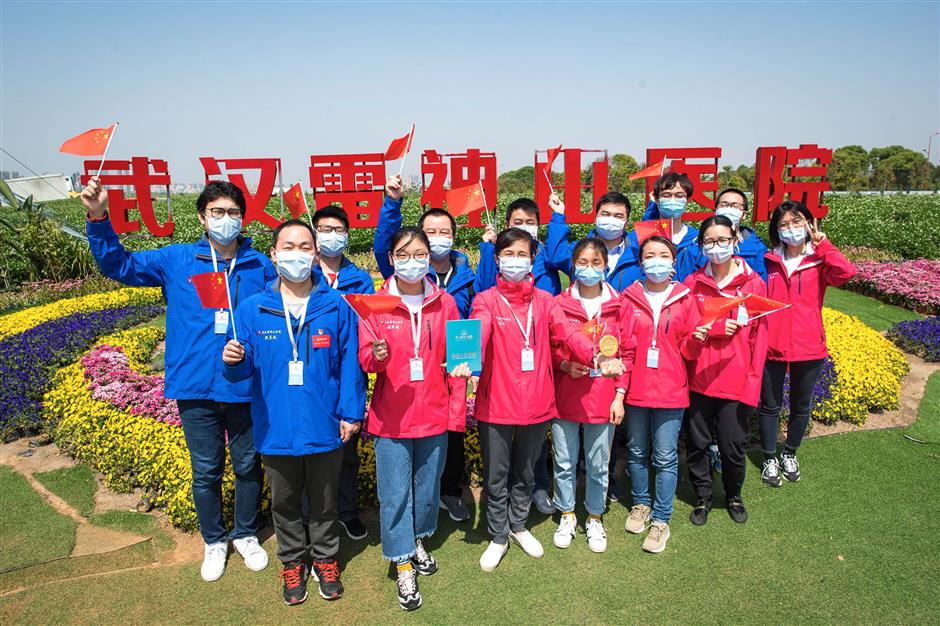 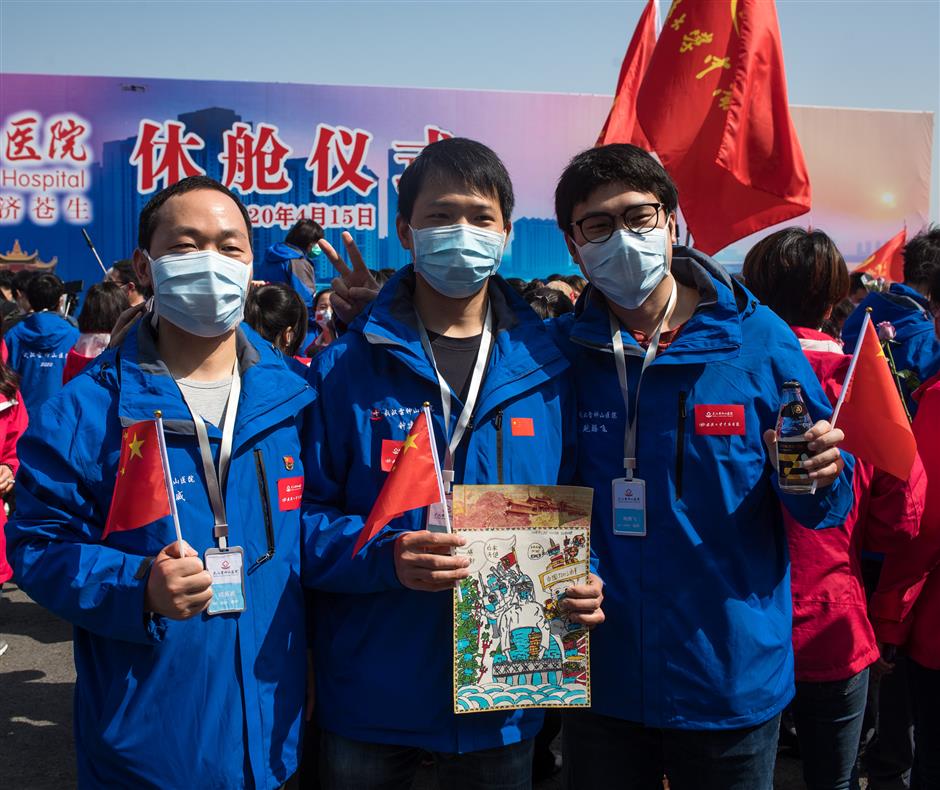 Yang recalled her most impressive patient as an 85-year-old man, who was discharged from Leishenshan a few days ago.

"The retired doctor volunteered to return to his community clinic at the peak of the epidemic and got infected there," she said. "When arriving here, he was very calm. He told me he was already 85 and 'if my time had come, then be it; if I was to live on, then live it to the fullest.'"

Yang was glad she could finally take a rest. "Many local doctors were already stretched to our breaking point ... What I wish to do most (after leaving Leishenshan) is have a good sleep."