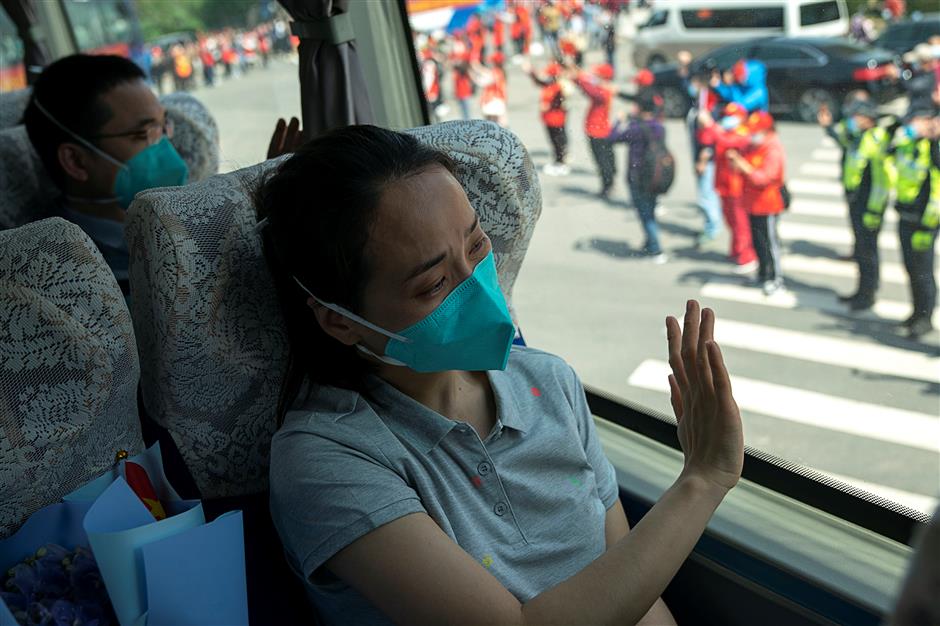 Medics wave goodbye to Wuhan citizens as they leave the city on April 15, 2020.

The last medical assistance team started leaving Hubei Province Wednesday as the COVID-19 epidemic in the hard-hit province has been subdued.

The medical team consisting of over 180 medical workers from the Peking Union Medical College Hospital arrived in the provincial capital of Wuhan on January 26.

Among the total, 179 medics left Wuhan Wednesday, and six will continue to stay there to assist local medical personnel in the treatment of patients.

"There are still a small number of patients who have not fully recovered. We hope they can get better as soon as possible," said Guo Fan, a member of the medical team assisting the Tongji Hospital in Wuhan.

"I have left home for over 80 days, I'm looking forward to seeing my family," said Guo.

A farewell ceremony was held in the early morning in Zhonghe International Hotel, where the medical team stayed in Wuhan.

"They worked very hard. I often saw many fall asleep while having breakfast. They deserve our heartfelt gratitude," said Liu Yanxia, a kitchen helper in the hotel, who left her post to see off the medical team.

Liu Chunhong, 56, is a community volunteer in Wuhan. He and another four volunteers drove to the hotel to bid farewell to the medical team.

"The medical personnel have sacrificed a lot for Wuhan. I come here to express my appreciation," said Liu, who put on a volunteer vest with names of the team members signed on it. "I will keep this vest permanently as a souvenir."

After the ceremony, the medical workers headed for Wuhan Tianhe International Airport at around 10:50 a.m., with police motorcycles and cars escorting the buses and local residents lining the streets and waving goodbye to them.

Over 42,000 medical workers from across the country were dispatched to aid Hubei in fighting the epidemic since the virus outbreak. The supporting medics started to withdraw from March 17.