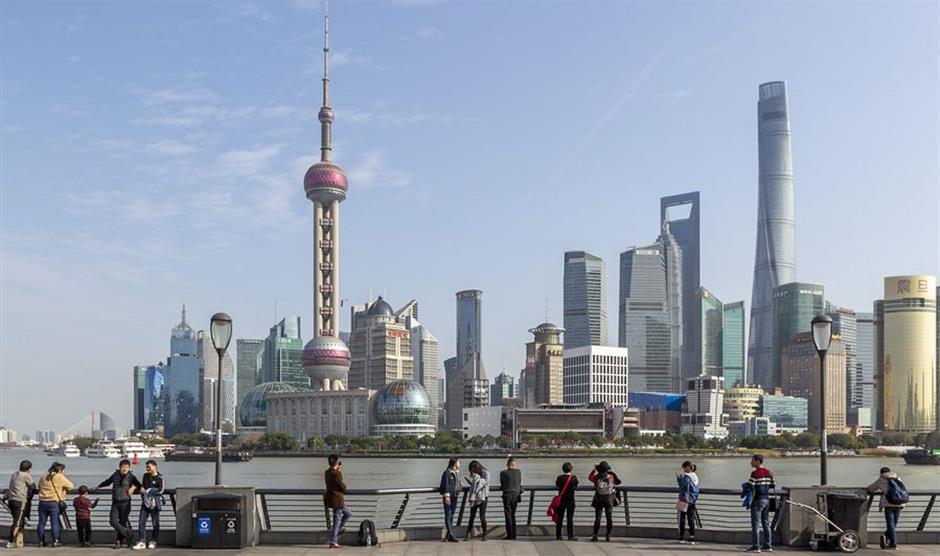 Tourists admire the skyline view of Lujiazui area at the Bund in Shanghai, east China, Jan. 6, 2020.

On April 18, 1990, China announced the development and opening up of Pudong. Thirty years later, Pudong's regional GDP has increased more than 210 times. It now contributes nearly one-third of Shanghai's GDP.

Besides its renowned skyline view, Pudong has more to offer. It is now home to over 1,000 financial institutions, over 300 regional headquarters of multinationals, and more than 240 foreign-invested R&D centers. Shanghai port, mainly in Pudong, is one of the world's busiest with the containers' throughput ranking the world's top for 10 consecutive years.

FROM FARMLAND TO WONDERLAND

"A single bed in Puxi is preferable to a room in Pudong." This is a popular saying in Shanghai before the accelerated development and opening up of Pudong.

The Huangpu River flows through Shanghai, dividing the city into two parts: "Pudong" and "Puxi." Pudong, which used to be occupied by farmland 30 years ago, has become a new landmark of China's reform and opening up.

The development and opening up of Pudong has brought more than just the prosperity of a single city. It has continuously delivered broad vision and new vitality into all parts of China, from the coast to the inland.

Pudong has also become a land of dreams for the world, particularly in the past few years. In September 2013, the Shanghai pilot free trade zone (FTZ) was officially launched there, injecting further impetus into its growth. 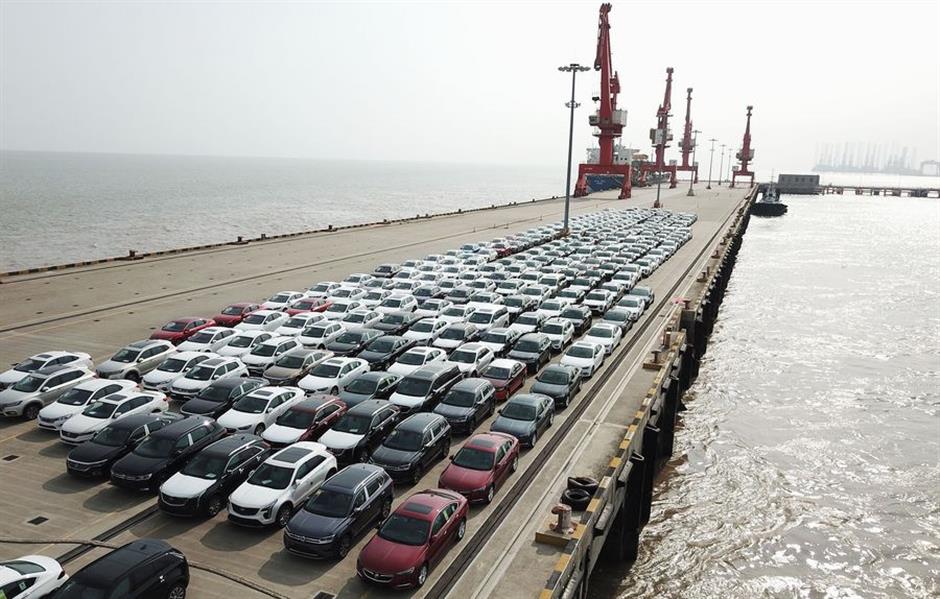 Aerial photo taken on June 27, 2019 shows new cars wating for shipment at a port in the Lingang area in Shanghai, east China.

"We have connections with more than 200 countries and regions around the world. For many companies, the Waigaoqiao area of the FTZ is the closest place from the world," said Chen Yanfeng, deputy director of China (Shanghai) Pilot Free Trade Zone Administration.

With reforms including the first negative list for foreign investment, Pudong has been committed to playing by the international rules, pushing to establish systems for trade and investment facilitation.

Jens Puttfarcken, president and CEO of Porsche China, said the company would not have been able to offset the impact of the COVID-19 epidemic so rapidly without the help of the local government in Pudong.

The epidemic posed challenges as it hit car sales, disrupted logistics chains, and challenged the resumption of work both for Porsche China and its dealers. However, the company resumed work in time in March with government support.

According to Puttfarcken, the local authorities helped the company locate a large storage venue for some 3,000 cars as its car sales in China dropped temporarily and save 6.5 million yuan (about 919,000 U.S. dollars) in rent for its two retail stores in Pudong.

Puttfarcken said that he recommends more multinational companies to come to China, come to Shanghai and come to Pudong.

Pudong's service-oriented government and reform and opening up initiatives have been exerting a significant influence on the whole country. 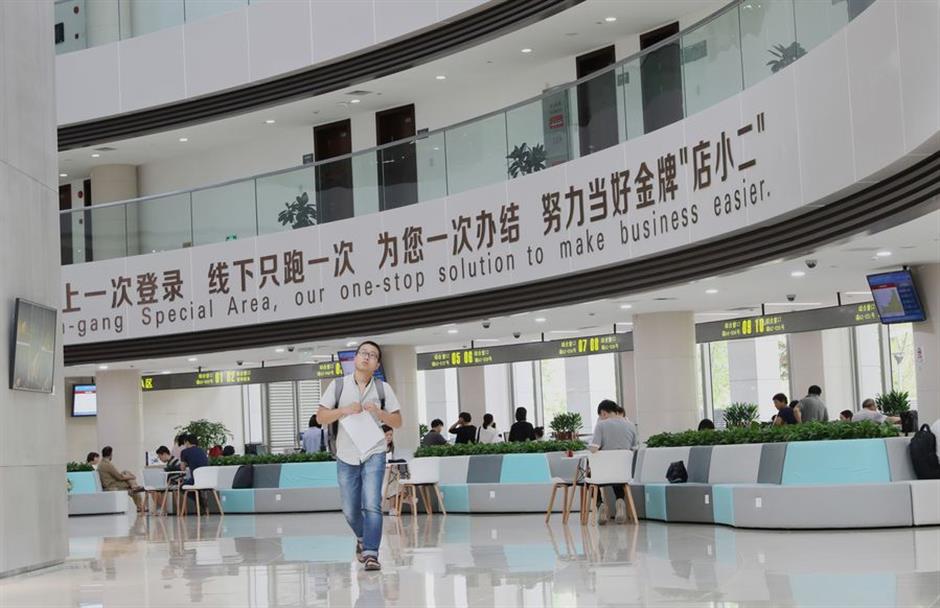 Photo taken on Aug. 20, 2019 shows an interior view of an administrative service center at the Lingang area of the China (Shanghai) Pilot Free Trade Zone in east China's Shanghai.

Since the establishment of the Shanghai FTZ, more than 120 institutional innovations have been replicated and promoted all around the country.

Even facing the economic pressure brought by the coronavirus outbreak, the Lingang area of the Shanghai FTZ still gained growth momentum, with 7 billion yuan of fixed-asset investment made in the first quarter, an annual increase of 20.5 percent.

The Tesla Shanghai gigafactory in Lingang resumed work in February. According to footage released by the company last week, the Model 3 production is in full swing now in Shanghai, when its plants in the United States have been shut down amid the COVID-19 outbreak.

Tesla Shanghai factory is an epitome of Shanghai's link with the world. As the meeting point of the Belt and Road Initiative and the Yangtze River economic belt strategy, Pudong is also an important hub to help connect China's inland regions with the world.

Since the first China International Import Expo (CIIE) held in Shanghai in 2018, Pudong has become a major beneficiary of CIIE throughout the year. Around 500 kg of Spanish ham brought by La Encina Seleccion Sl. was sold out fast during the first CIIE. Anticipating an even bigger ordering spree, the company set up its China branch in Lujiazui the next year.

After attending the first CIIE, Swedish medical equipment producer Elekta set up its China headquarters and an R&D institute in Lujiazui. Gong Anming, executive vice president and China CEO of Elekta, was amazed by the efficiency of local government. "Any difficulties we encountered were resolved by the government departments in time," Gong recalled.

Over the past three decades, Pudong has attracted 35,000 foreign-funded enterprises from 168 countries and regions, receiving foreign investment of 95.86 billion dollars.

Investments from Shanghai are also reaching out all over the world. By the end of 2018, Pudong enterprises alone had invested in nearly 200 projects in 30 countries along the Belt and Road.

"Pudong's further reform and opening up in the new era will not be a simple increase in quantity, but a comprehensive improvement in quality," said Weng Zuliang, secretary of the Pudong New Area Committee of the Communist Party of China.

"It's not just about Pudong's own development, but also about the building of Pudong into a model region showcasing China's vision, proposals and path in the new era."