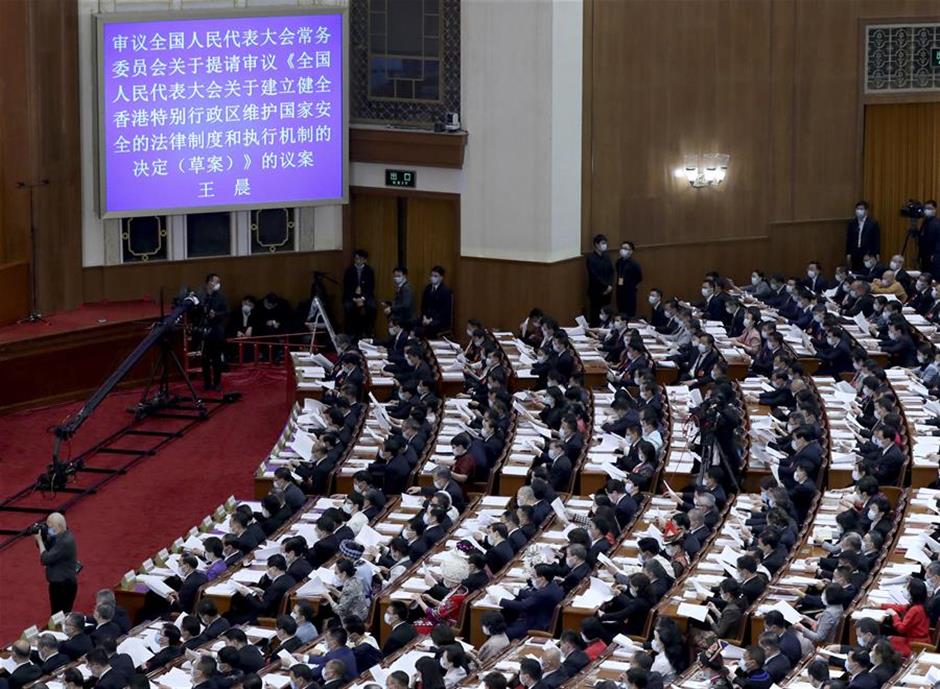 A draft decision on establishing and improving the legal system and enforcement mechanisms for the Hong Kong Special Administrative Region to safeguard national security was submitted to China's national legislature for deliberation on Friday.

Wang Chen, vice chairman of the Standing Committee of the National People's Congress (NPC) explained the draft decision to the third session of the 13th NPC, which runs from May 22 to 28.

Since the return of Hong Kong to the motherland, China has been firmly implementing the principles of "one country, two systems," "the people of Hong Kong governing Hong Kong," and a high degree of autonomy, Wang said.

The practice of "one country, two systems" has achieved unprecedented success in Hong Kong, he said.

But the increasingly notable national security risks in the HKSAR have become a prominent problem, the vice chairman said, citing activities that have seriously challenged the bottom line of the "one country, two systems" principle, harmed the rule of law, and threatened national sovereignty, security and development interests.

Law-based and forceful measures must be taken to prevent, stop and punish such activities, he noted.

More than 20 years after Hong Kong's return, however, relevant laws are yet to materialize due to the sabotage and obstruction by those trying to sow trouble in Hong Kong and China at large, as well as external hostile forces, Wang said.

Considering Hong Kong's situation at present, efforts must be made at the state-level to establish and improve the legal system and enforcement mechanisms for the HKSAR to safeguard national security, to change the long-term "defenseless" status in the field of national security, Wang said.

This will advance the institutional building to safeguard national security on the course of China's Constitution and the Basic Law of the HKSAR, he said.

This will also strengthen the work of safeguarding national security and ensure the steady and enduring growth of the cause of "one country, two systems", he added.

— Upholding and improving the "one country, two systems";

— Adhering to governing Hong Kong in accordance with the law;

The draft decision consists of an introduction and seven articles, according to Wang.

Article 1 states clearly that the country will unswervingly, fully and faithfully implement the principles of "one country, two systems," "the people of Hong Kong governing Hong Kong," and a high degree of autonomy; stresses taking necessary measures to establish and improve the legal system and enforcement mechanisms for the HKSAR to safeguard national security, as well as prevent, stop and punish activities endangering national security in accordance with the law;

Article 2 states clearly that the country resolutely opposes the interference in the HKSAR affairs by any foreign or external forces in any form and will take necessary countermeasures;

Article 3 specifies that it is the HKSAR's constitutional responsibilities to safeguard national sovereignty, unity and territorial integrity; stresses that the HKSAR must complete the national security legislation stipulated in the Basic Law of the HKSAR at an earlier date and HKSAR's administrative, legislative and judicial organs must, in accordance with relevant laws and regulations, effectively prevent, stop and punish acts endangering national security;

Article 6 specifies the constitutional meanings of related legislation of the NPC Standing Committee:

(2)Specifying that relevant legal tasks for the NPC Standing Committee are to effectively prevent, stop and punish any act occurring in the HKSAR to split the country, subvert state power, organize and carry out terrorist activities and other behaviors that seriously endanger national security, as well as activities of foreign and external forces to interfere in the affairs of the HKSAR;

Article 7 specifies that this decision shall go into effect as of the date of promulgation.

After the issuance of the decision, the NPC Standing Committee will work with related parties to formulate relevant laws at an earlier date for the HKSAR to safeguard national security, actively push for settling prominent problems in the national security system of the HKSAR, strengthen the building of special institutions, enforcement mechanisms and law enforcement forces, so as to ensure relevant laws' effective implementation in the HKSAR, Wang said.