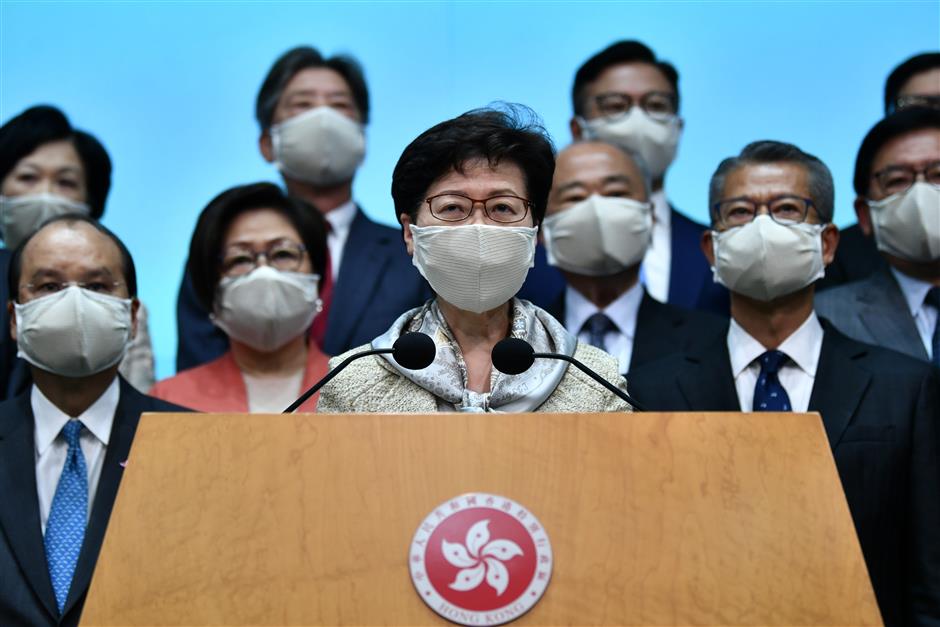 Hong Kong Chief Executive Carrie Lam (C) holds a press conference after attending the opening session of the National People's Congress (NPC) at the Great Hall of the People in Beijing, in Hong Kong on May 22, 2020.

The Chief Executive of Hong Kong Special Administrative Region, Carrie Lam, said Friday her administration will fully cooperate with the Standing Committee of the National People's Congress to complete the new national security law as soon as possible to ensure the long-term prosperity and stability of Hong Kong under "One Country, Two Systems."

Lam, who is attending the opening ceremony of the third session of the 13th NPC in Beijing, made the remarks in a statement.

A draft decision on establishing and improving the legal system and enforcement mechanisms for the HKSAR to safeguard national security was submitted to the third session of the 13th NPC for deliberation on Friday.

The introduction of the bill came after Hong Kong was embroiled in prolonged riots last year as the city's opposition attempted to create a "color revolution."

"The NPC is the highest organ of state power, and its decisions have the highest authority with legal effect. The Decision optimizes the HKSAR's implementation of the system and mechanisms concerning national security under the Constitution and the Basic Law," she said.

Lam said the national bill would not affect Hong Kong's judicial independence or its legal entities.

She said the bill only targets acts of secession, subverting state power and organizing and carrying out terrorist activities, as well as activities interfering with the HKSAR's internal affairs by foreign or external forces.

He said national, and Hong Kong's security is conducive to the city's economic development and people's livelihoods, adding the law is in line with the interests of Hong Kong society.