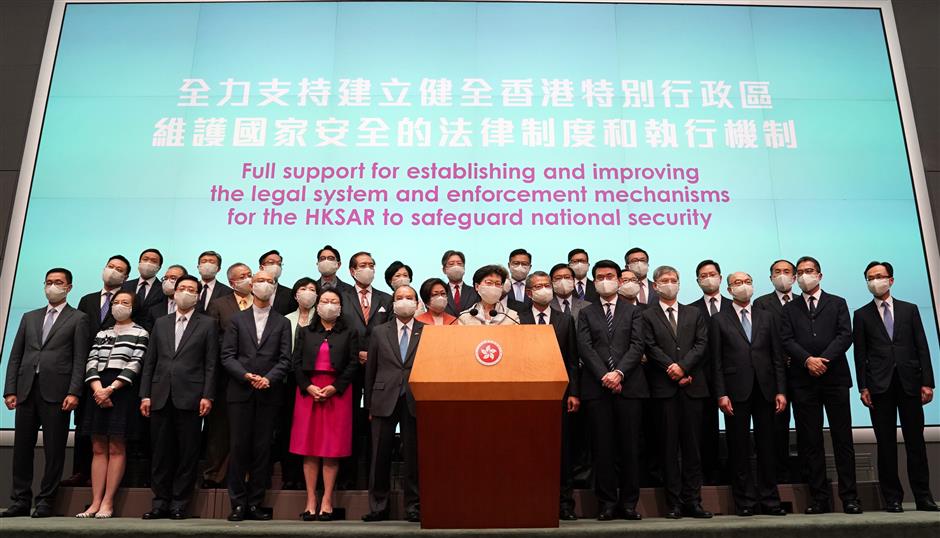 HKSAR Chief Executive Carrie Lam (center) speaks at a press conference in Hong Kong on May 22, 2020.

Business confidence in Hong Kong will improve as the place will be safer after its legal system and enforcement mechanisms to safeguard national security are established and improved, Lam said, stressing the interests of foreign investors will not be damaged.

Lam made the remarks at a press conference that was also attended by multiple other government officials and members of the Executive Council.

A draft decision on establishing and improving the legal system and enforcement mechanisms for the HKSAR to safeguard national security was submitted to the third session of the 13th National People's Congress for deliberation on Friday.

National security is the top priority of every country and region, which is the foundation for residents' well-being, Lam said.

Over the past year, Hong Kong has seen rising risks of endangering national security and the alarm of terrorist activities in Hong Kong has been raised, she said.

Given the increasingly serious situation in the HKSAR, the executive and legislative authorities of the HKSAR have difficulties in completing on their own legislation for safeguarding national security in the foreseeable future, Lam said.

The HKSAR government supports the NPC's deliberation of the draft decision to establish and improve at the state-level the legal system and enforcement mechanisms for the HKSAR to safeguard national security, Lam said.