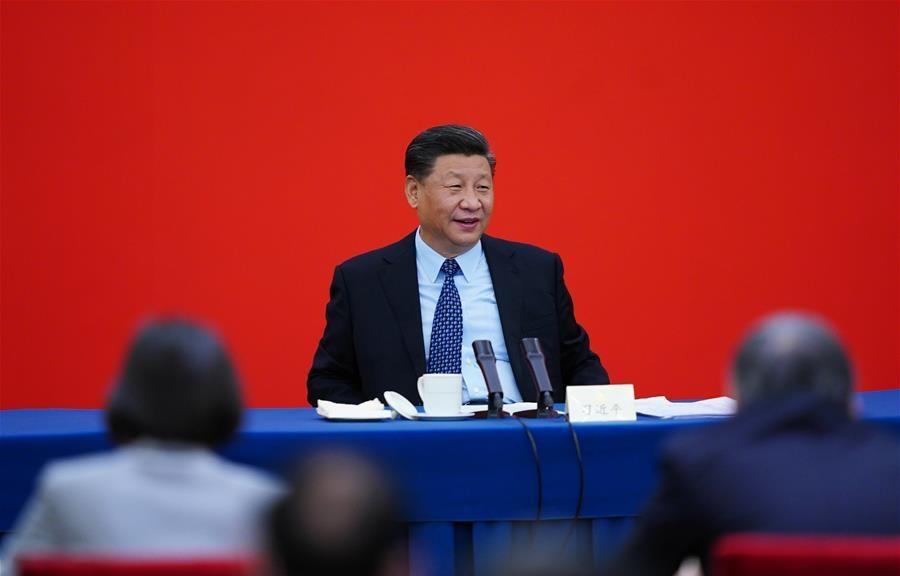 Chinese President Xi Jinping, also general secretary of the Communist Party of China Central Committee and chairman of the Central Military Commission, visits national political advisors from the economic sector attending a joint panel discussion at the third session of the 13th National Committee of the Chinese People's Political Consultative Conference in Beijing, capital of China on May 23, 2020.

Xi, also general secretary of the Communist Party of China Central Committee and chairman of the Central Military Commission, made the remarks when joining a joint panel discussion attended by national political advisors from the economic sector.

The political advisors are in Beijing for the third session of the 13th National Committee of the Chinese People's Political Consultative Conference.

Xi made a speech after hearing the remarks of political advisors.

Efforts should be made to leverage China's potential and role as the world's largest market, clarify the strategic direction of supply-side structural reform, and consolidate the basic trend of steady economic growth with a sound momentum in the long term, he said.

Xi called for consolidating the fundamental role of agriculture, ensuring stability on the six fronts and security in the six areas, and accomplishing the targets and tasks of building a moderately prosperous society in all respects and winning the battle against poverty.

Reiterating the necessity to view current difficulties, risks and challenges from a comprehensive, dialectical and long-term perspective, Xi said efforts should be made to boost confidence of the whole society, especially market entities.

China's economy is in a pivotal stage for transforming the growth model, improving economic structure, and fostering new growth drivers, Xi said, adding that the economic operation now faces relatively heavy pressure due to difficulties and challenges caused by intertwined structural, institutional and cyclical problems, which have been compounded by the COVID-19 outbreak.

China has the largest industrial system in the world with the most complete categories, strong production capabilities, complete supporting sectors, as well as over 100 million market entities and a talent pool of 170 million people, Xi said.

The country also has a super-large domestic market of 1.4 billion people and massive potential in investment demand, he said.

He called for faster progress in advancing the development of digital economy, intelligent manufacturing, life and health, new materials and other strategic emerging industries, highlighting the creation of new growth areas and drivers.

Xi stressed steady progress in creating a new development pattern where domestic and foreign markets can boost each other, with domestic market as the mainstay.

Xi called for unwavering efforts to make economic globalization more open, inclusive and balanced so that its benefits are shared by all, and to build an open world economy.

More steps should be taken to maintain the security of industrial and supply chains, and to forestall and defuse major risks, Xi noted.

Xi added the fundamental role of agriculture should not be neglected or undermined at any time.

China is fully capable of ensuring the supply of grain and major agricultural products, which have played an important role in maintaining social stability through the severe epidemic, Xi said.

Xi stressed all localities and departments must faithfully implement the decisions, plans, policies and measures made by the CPC Central Committee, and eschew the practice of formalities for formalities' sake and bureaucratism.

Wang Yang, a member of the Standing Committee of the Political Bureau of the CPC Central Committee and chairman of the 13th CPPCC National Committee, also attended the discussion.