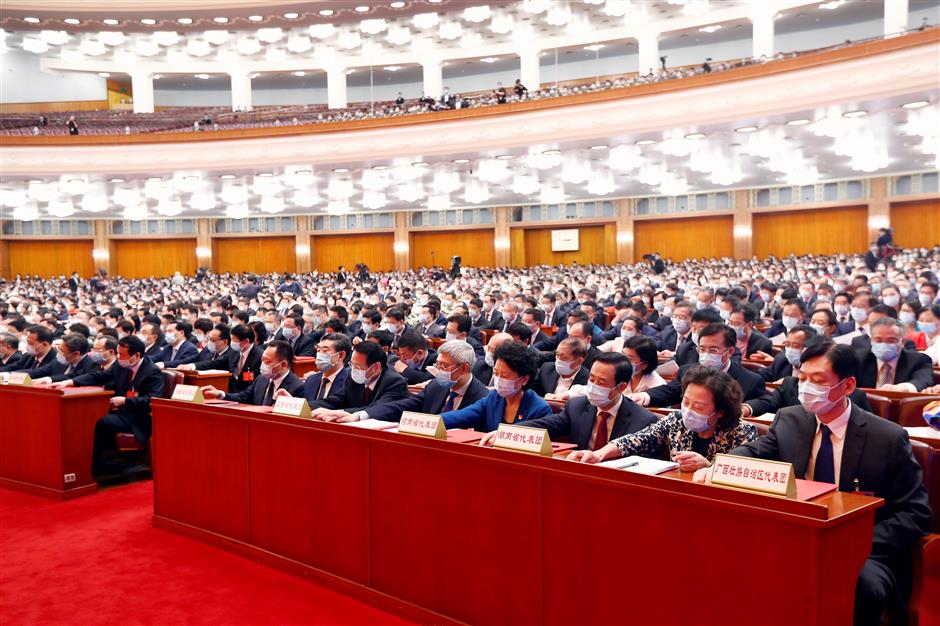 Chinese lawmakers vote at the closing meeting of the third session of the 13th National People’s Congress at the Great Hall of the People in Beijing on Thursday.

Deputies to the 13th National People’s Congress attending the closing meeting of its third annual session voted overwhelmingly to approve the NPC Decision on Establishing and Improving the Legal System and Enforcement Mechanisms for the Hong Kong Special Administrative Region to Safeguard National Security. The vote was 2,878 to one with six abstentions.

The NPC Standing Committee is entrusted to formulate relevant laws to tackle secession, subversion, terrorism and foreign interference in Hong Kong, which will be included in Annex III of the Basic Law of the HKSAR to be promulgated and implemented by the HKSAR locally.

The decision said it is the HKSAR’s constitutional duty to safeguard national sovereignty, unity and territorial integrity.

The HKSAR must complete the national security legislation stipulated in the Basic Law of the HKSAR at an early date and HKSAR’s administrative, legislative and judicial organs must effectively prevent, stop and punish acts and activities endangering national security.

Li Zhanshu, the chairman of the NPC Standing Committee which will now draft the law, said the move was “in line with the fundamental interests of all Chinese people, including Hong Kong compatriots.”

Hong Kong’s chief executive Carrie Lam said her government would work with the central government to complete the legislative work as soon as possible.

“The law will not affect the rights and freedoms enjoyed by Hong Kong residents,” she said in a statement.

According to the decision, China will unswervingly, fully and faithfully implement the principles of “one country, two systems,” “the people of Hong Kong governing Hong Kong” and a high degree of autonomy.

China resolutely opposes the interference in Hong Kong affairs by any foreign or external forces in any form and will take necessary countermeasures.

The decision goes into effect as of the date of promulgation.

The move came after prolonged social unrest and escalating street violence had plunged Hong Kong into the gravest situation since its return to the motherland in 1997.

“More than 20 years after Hong Kong’s return, however, relevant laws are yet to materialize due to the sabotage and obstruction by those trying to sow trouble in Hong Kong and China at large, as well as external hostile forces,” Wang said.