You don't have to be a kung fu master to smash a brick using your bare hands.

All you need is a basic grasp of the impulse-momentum theorem, according to a Chinese high school physics teacher.

Zhang Hui, a physics teacher from a high school in the city of Mi'le, southwest China's Yunnan province, has become an online sensation after several videos of him hand-shattering a brick surfaced on the internet.

In a recent viral video, the sturdy-looking Zhang is seen placing a concrete brick on the edge of a table and splitting the brick in half with his right hand during a physics class. The students surrounding Zhang let out cries of amazement after he performs the stunt.

"If I had had a teacher like Zhang, I would have done a much better job at my high school physics," said a comment on China's Twitter-like Weibo, which has garnered many likes from the netizens.

"The stunt was actually a lead-in for the class. I was about to introduce my students to the impulse-momentum theorem after it," said Zhang, who has been surprised by the online attention. 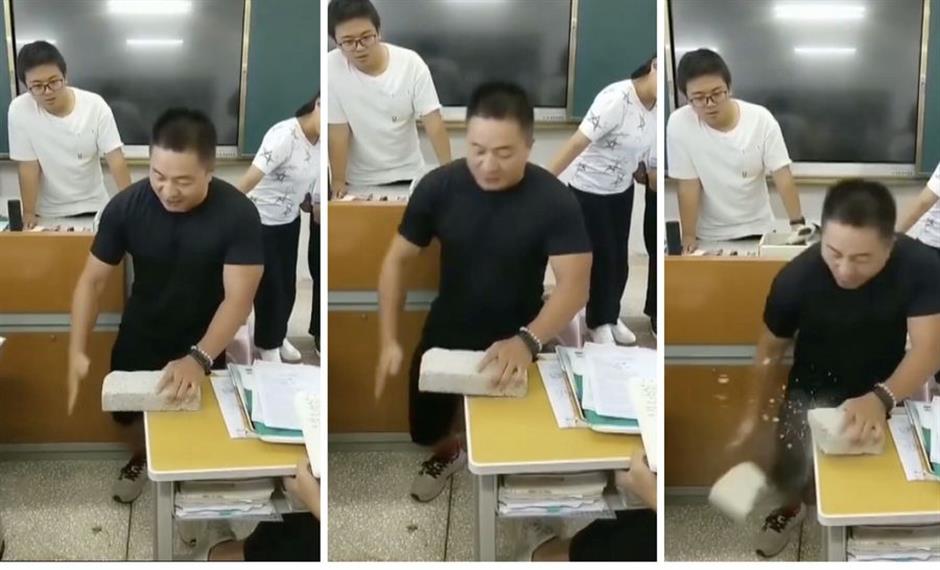 Zhang Hui splits a brick with bare heads in class.

Zhang explained that during the performance, he raised the brick at one end and thrust it against the edge of the table as his right hand "chopped it up." Thus, the brick was split more by the impact between the brick and the table than by the strength of his hand, he said.

The brick-breaking stunt is one of the many creative ways that Zhang has introduced his students to abstract physics theories.

"High school physics is difficult, so I often use more visual ways to teach the theories and attract my students' interest," said Zhang, who has been teaching physics in high school for 14 years.

To teach the concept of momentum, he has also brought skateboards into his class, besides the brick-smashing performance.

Zhang said his creative ideas usually come up during his daily workout routines, which include running and body-building. "When I work out each day, I always think about ways to let my students participate in class and make them interested in physics," he said.

"I believe physics principles underly every sport. That's why I try to bring elements of sports into my class," he added.

Besides teaching physics, Zhang, also an instructor at the school fitness club, which advises students on how to get fit. "I teach my students proper training methods so that they can fully enjoy sports," he said. 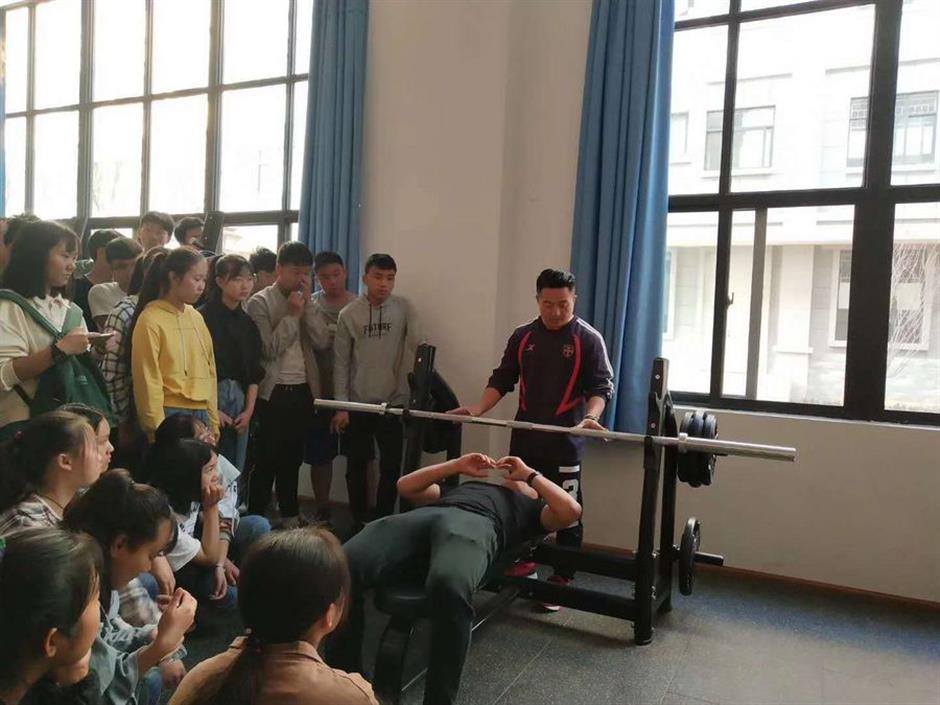 Zhang Hui teaches students how to use gym equipment.

Regarding the ongoing online attention, Zhang said more attention should be given to teachers working in China's remote and mountainous regions than him, "an ordinary physics teacher just doing his job."

"The village teachers teach lessons, prevent students from dropping out of school and contribute to the poverty relief campaign in China's rural areas. They are the ones who deserve more praises from the netizens," Zhang said.