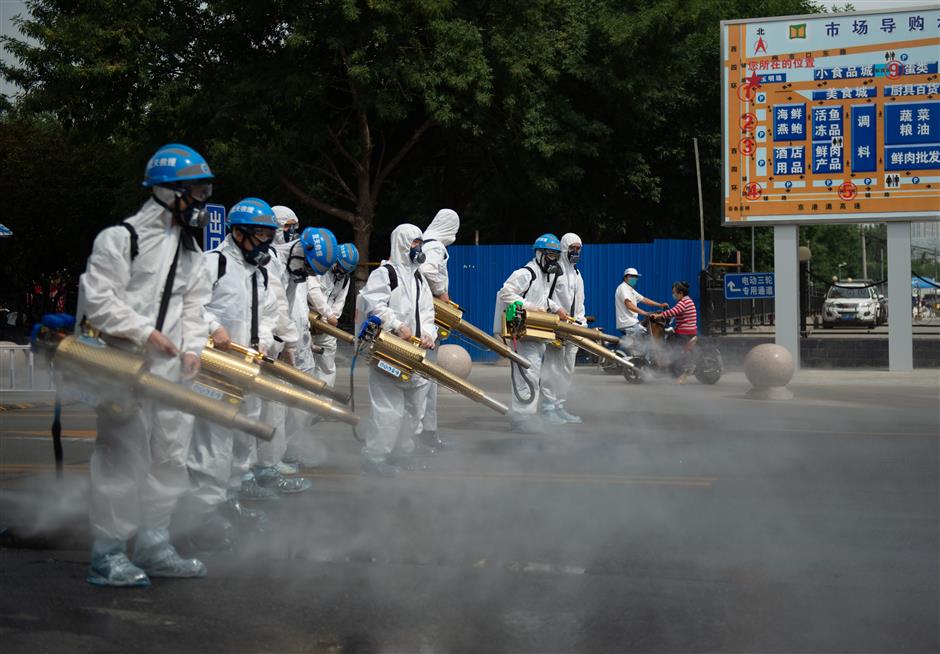 Beijing upgraded its emergency response to the novel coronavirus epidemic from the third level to the second on Tuesday, as 27 new COVID-19 cases took the capital’s current outbreak to 106.

People who have recently visited Xinfadi market, the largest wholesale market in Beijing which is believed to be the origin of the recent outbreak, and those who are living in medium- and high-risk areas are prohibited from leaving Beijing, said Chen Bei, deputy secretary-general of Beijing municipal government, at a press conference last night.

People are not allowed to leave communities in high-risk neighborhoods. Students shall stop going back to school.

As of Tuesday, Beijing had designated 27 neighborhoods as medium-risk areas and Huaxiang is the only high-risk one.

There is no need to stop production and shut down businesses, the local official said, but flexible working time and working from home should be encouraged.

All outbound taxi and car-hailing services have been suspended. Some long-distance bus routes between Beijing and nearby Hebei and Shandong provinces were halted.

Some long-distance bus services from Beijing to surrounding Hebei were also halted. Highways out of the capital remained open.

While not in a Wuhan-style lockdown, Beijing has gone into a “wartime” mode on a district level, with neighborhoods instituting 24-hour security checkpoints, closing schools and banning wedding banquets.

Beijing has disinfected 276 farm produce markets and closed 11 such underground and semi-underground markets as of 6am Tuesaday to better curb the spread of the novel coronavirus, Chen Yankai, deputy director of the municipal market supervision bureau, told a press conference on Tuesday.

A total of 33,173 catering service providers have also been disinfected, Chen added.

The city detected one COVID-19 case at another vegetable market in Xicheng District on Sunday.

The district has since implemented lockdown measures at the affected location.

A total of 62 individuals linked to the market were put under quarantine and tested for coronavirus. All results have come back negative.

The city will guarantee market supplies to meet residents’ daily needs and maintain the stability of prices, Beijing Party chief Cai Qi said. Business owners who engage in price gouging will be penalized.

The National Health Commission on Tuesday also reported four new domestic infections in Hebei Province, three of which were linked to the Beijing cluster.