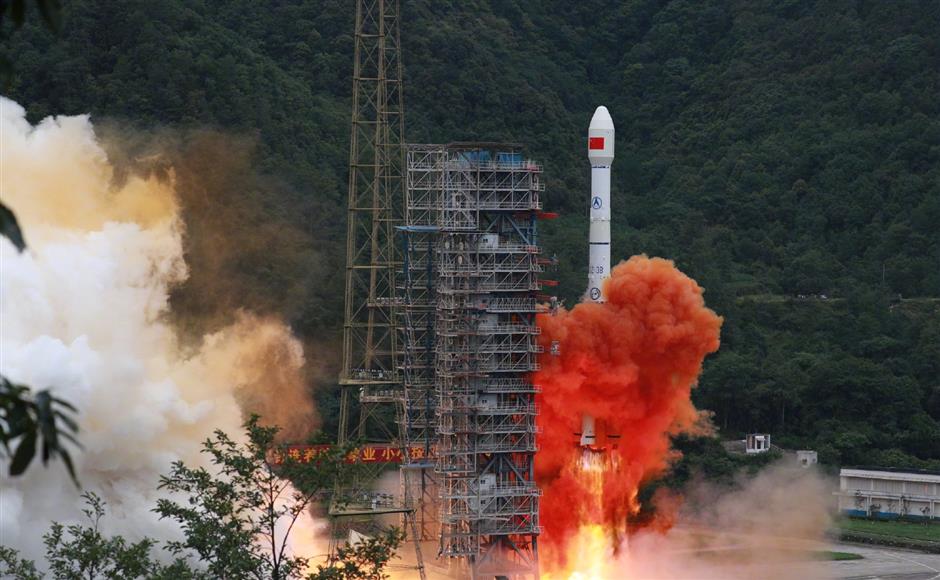 The last satellite of the BeiDou Navigation Satellite System blasts off from the Xichang Satellite Launch Center in southwest China's Sichuan Province at 9:43am on Tuesday.

China launched the last satellite of the BeiDou Navigation Satellite System on Tuesday, marking the completion of the deployment of its own global navigation system.

The satellite, the 55th in the family of BeiDou that means "Big Dipper" in Chinese, was launched at 9:43am (Beijing Time) and sent into the preset orbit by a Long March-3B carrier rocket from the Xichang Satellite Launch Center in southwest China's Sichuan Province.

The mission, the 336th by the Long March rocket series, was a "complete success," the launch center said.

The satellite, designated to enter the geostationary earth orbit (GEO), was the last one of the BDS-3 system, which started to offer countries and regions along the Belt and Road as well as the world basic navigation service in December 2018.

China has been actively encouraging the cooperation and exchanges between the BDS system and other navigation systems in fields such as construction and application, strengthening compatibility and interoperability, resource sharing, and providing users with more qualified, diversified, safe and reliable services. 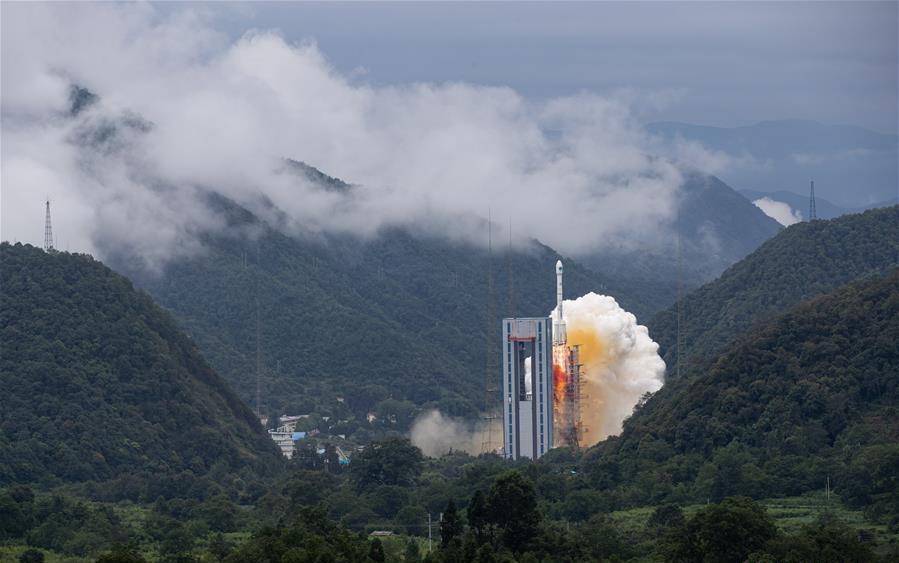 A carrier rocket carrying the last satellite of the BeiDou Navigation Satellite System (BDS) blasts off from the Xichang Satellite Launch Center in southwest China's Sichuan Province on June 23, 2020.

Compared with other global systems in the world, the design of the BDS constellation is unique, including medium earth orbit (MEO), inclined geosynchronous orbit (IGSO) and GEO satellites.

The three GEO satellites, including the newly launched one, can help significantly enhance the overall technical indicators of the BDS-3 system, according to the satellite developer China Academy of Space Technology (CAST).

The short message communication capability of the BDS-3 system has been improved 10 times. Users of the system can send a message of 1,200 Chinese characters at one time, as well as pictures, a useful function in emergencies.

Active positioning, employing radio measurement technology, can provide the locations of the users, not only to themselves, but also to relevant parties who are monitoring the users' whereabouts, through the joint efforts of two GEO satellites.

The function is widely used in search and rescue, fishing and other fields to help guarantee people's safety.

It also integrates navigation and communication capabilities for the first time, and can provide services of navigation, short message communication, satellite-based augmentation, international search and rescue, as well as precise point positioning.

"BDS provides time-and-space location benchmarks, which will have a great influence on the country's social and economic development, as well as people's lives," said Chen Zhonggui, chief designer of the BDS-3 satellites at CAST.

"It will also lay the foundation for new infrastructure construction, an important direction for China's development in the next stage," Chen said.

China started to explore a navigation satellite system suited to its national conditions in the 1980s, laying down a three-step strategy. 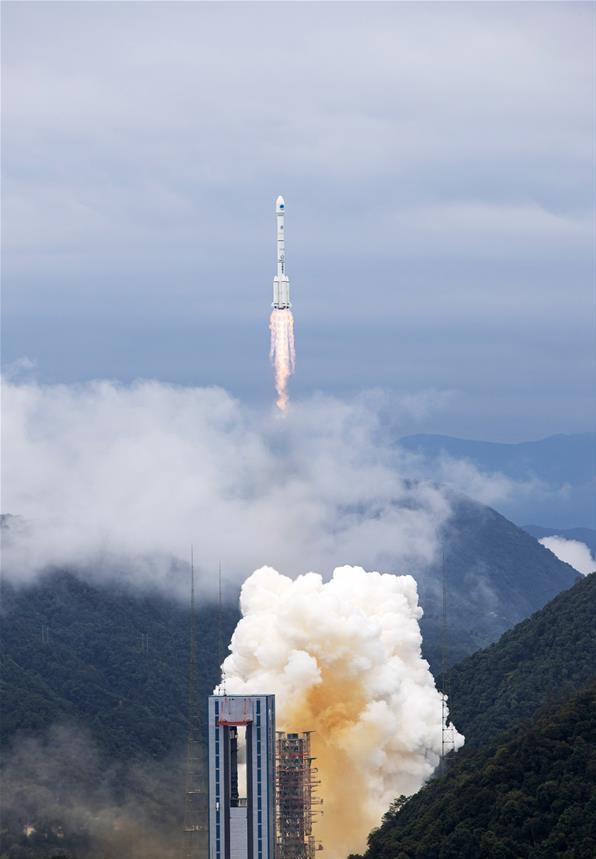 A carrier rocket carrying the last satellite of the BeiDou Navigation Satellite System blasts off from the Xichang Satellite Launch Center in southwest China's Sichuan Province on June 23, 2020.

The BDS-1 project, the first step, also known as BeiDou Navigation Satellite Demonstration System, got official approval in 1994, when China was still facing an international technology blockade and domestic component manufacturers were not yet fully fledged.

The team started the exploration work with the solar arrays, recalled Fan Benyao, chief designer of BDS-1 at CAST.

Insisting on self-reliance, the older generation of the BDS team overcame a series of technical problems, including those relating to the Dongfanghong-3 satellite platform and key components that might affect the service life of the satellites.

BDS-1 was completed and put into operation in 2000 with the launching of two satellites, providing useful experience in the areas of construction and application, as well as training professionals for the following projects.

The second step was to construct the BDS-2 system, which started in 2004.

The team worked around the clock, at one point conducting 200-hour non-stop power-on tests at the launch site.

The BDS-2 system is the world's first hybrid constellation, in which satellites in three kinds of orbits work in concert. It started providing regional services for users in the Asia-Pacific region in December 2012. 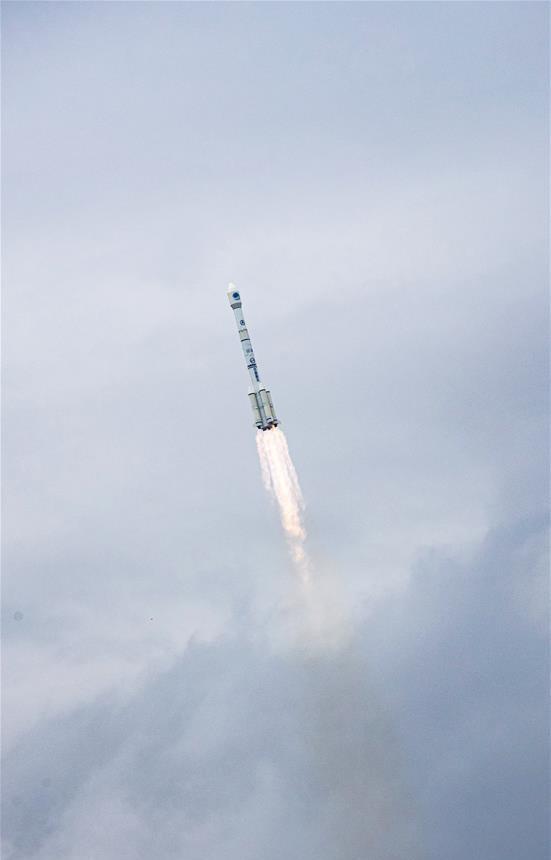 A carrier rocket carrying the last satellite of the BeiDou Navigation Satellite System lifts off from the Xichang Satellite Launch Center in southwest China's Sichuan Province on June 23, 2020.

Before the BDS-2 system officially provided regional services, China had begun to develop the BDS-3 global navigation system, with better performance and reliability.

The year 2018 saw the most intensive launch of the BDS satellites, with 19 satellites sent into space.

Compared with the BDS-2 system, the signals of the BDS-3 system have been upgraded to provide better services.

The research team from CAST has also achieved technological breakthroughs in inter-satellite links to facilitate communications, data transmission and ranging among the satellites.

"The development of satellite navigation technology is not only a significant item of infrastructure for China, but also an item of infrastructure that provides timing, positioning and navigation services for the whole world. The continuity and stability of the services are very important," said Chi Jun, chief director of the research team at CAST.

The designed lifespan of the BDS-3 satellites has been increased to 12 years.

The BDS-3 satellites are equipped with high-precision rubidium and hydrogen atomic clocks, independently developed by China to improve accuracy.