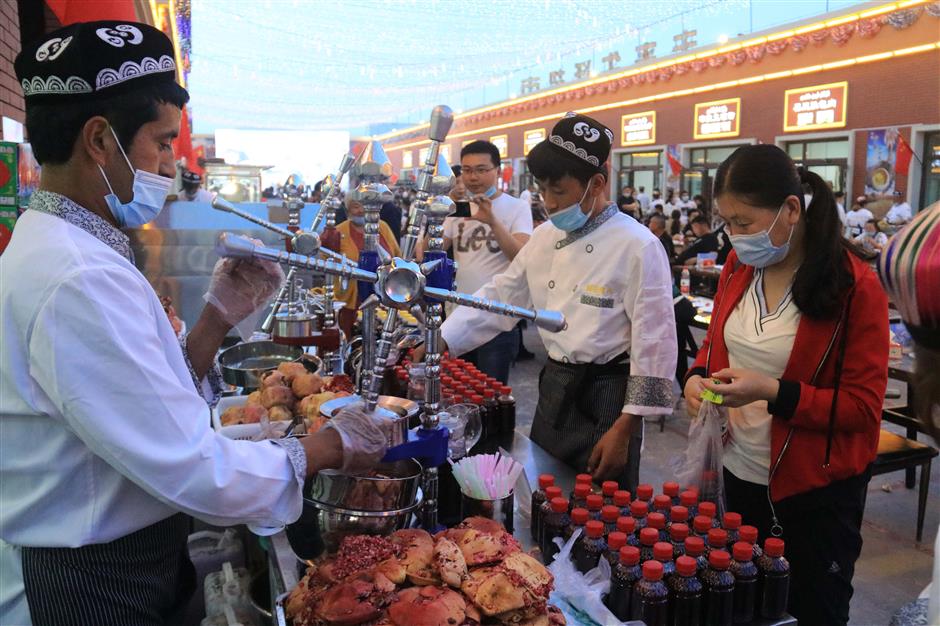 People enjoy a night market in Altay, a county-level city in the Xinjiang Uygur Autonomous Region.

Each evening, 29-year-old Azgul Eyni finds herself constantly glancing at the clock, waiting for it to strike nine.

As a mother of two and a stall operator in a night market in the Xinjiang Uygur Autonomous Region, Azgul Eyni takes care of her children in the daytime and prepares ingredients for the local delicacies she will sell by night.

As the hour hand ticks over at long last, she heads to the night market to run her stall with bags of ingredients in tow. As she prepares her food, she chats with her customers — mostly people from nearby villages and sometimes tourists from afar.

From 9pm to around 2am, she flits back and forth between roasting eggs on charcoal grills and topping traditional homemade rice puddings with honey and yogurt. A lantern hangs from a wooden bar of her stall and a WeChat Pay QR code is plastered on the wall behind her.

Set up in 2018 and put into use last year, 42 food stalls and 42 dining tables line the night market in the township of Langgar, Yutian County.

The night market was built with assistance from north China’s Tianjin, which is partnered with Langgar under a pairing assistance program to support Langgar’s development, said local official Cui Yanwu.

China has been implementing a pairing assistance program for Xinjiang’s development since 1997, channeling financial and personnel support to Xinjiang from other regions of the country.

The government provides stalls, tables and chairs for the businesses of the vendors. The night market has so far attracted more than 40 registered impoverished residents.

Mirgul Abdulla, a villager, came to the night market with her friends. They chatted as they savored roasted barbecue, cups of beer and cold dishes.

“I love it here. The food is fresh and there are many familiar faces, so we can eat to our hearts’ content and have a great time,” said Mirgul Abdulla.

A group of youngsters started to sing and dance. Then four local artists sang songs on the stage as they played musical instruments. The night market erupted in great rounds of applause as the artists sang.

The venue provides locals with a means of relaxation and entertainment — but more than that. For poverty-stricken residents, the opportunity provided by the local government to run their own stalls has become a way to shake off poverty and enrich their lives.

Azgul Eyni used to be a poor resident, whose family of four had to get by on her husband’s monthly salary of little more than 1,000 yuan (US$141).

Since registering to run one of the stalls free of charge at the Langgar night market, she has earned more than 4,000 yuan a month, with which her family can afford a better life.

Currently, there are more than 50 rural night markets in Yutian.

“In the past, the rural areas in Xinjiang were relatively quiet at night.

“Since the night markets have come alive, they have not only provided jobs for poor households and boosted the rural economy.

“They have also enriched the cultural life of residents and met their needs for a better life,” said Cui.

The night market featuring rural flavor and folk customs attracts many tourists to Langgar. About 500 tourists have visited each day over the summer.

“The night market has not only enriched our days here in the township, but has brought us a more serene life,” said Mirgul Abdulla.