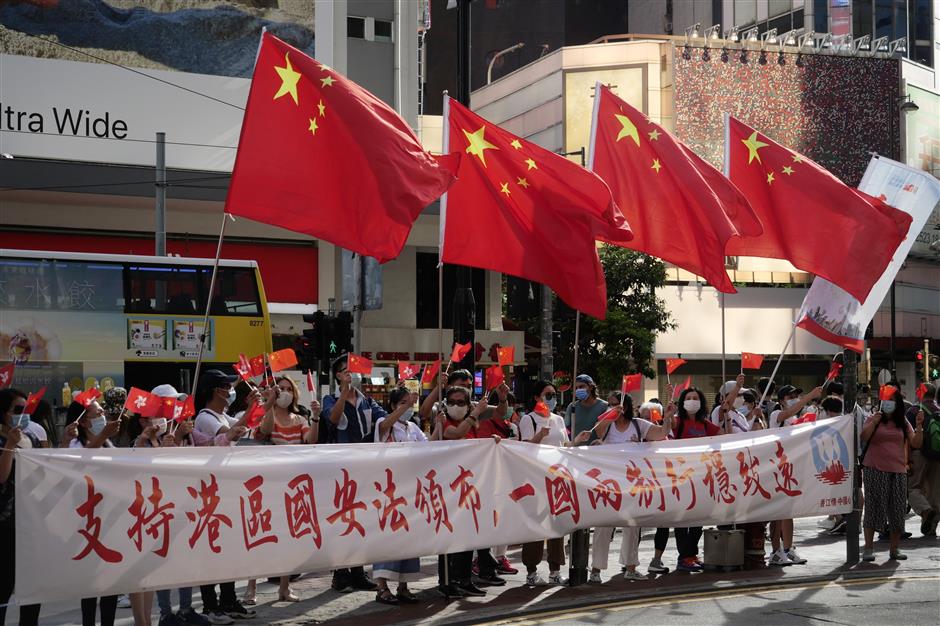 People celebrate the adoption of the law on Safeguarding National Security in the Hong Kong Special Administrative Region on June 30, 2020.

Speaking at the 44th session of the United Nations Human Rights Council on Tuesday, Cuba on behalf of 52 countries welcomed the adoption of the law on Safeguarding National Security in the Hong Kong Special Administrative Region by China's top legislature.

The number of countries, which signed the joint statement Cuba read at the session, is expected to rise.

"Non-interference in internal affairs of sovereign states is an essential principle enshrined in the Charter of the United Nations and a basic norm of international relations," a representative of Cuba read the joint statement.

"In any country, the legislative power on national security issues rests with State, which in essence is not a human rights issue and therefore not subject to discussion at the Human Rights Council," said the statement.

"We believe that every country has the right to safeguard its national security through legislation, and commend relevant steps taken for this purpose."

"In this context, we welcome the adoption of the decision by China's legislature to establish and improve a legal framework and enforcement mechanisms for the Hong Kong Special Administrative Region for the purpose of safeguarding national security, as well as China's reaffirmation of adherence to 'one country, two systems' guideline," the statement said.

"We are convinced that this move is conducive to ensure 'one country, two systems' is steady and enduring, and that Hong Kong enjoys long term prosperity and stability. The legitimate rights and freedoms of Hong Kong residents can also be better exercised in a safe environment," it continued.

Chinese lawmakers on Tuesday voted to adopt the law at the 20th session of the Standing Committee of the 13th National People's Congress, China's top legislature.

It took effect at 11pm local time on Tuesday in Hong Kong. The promulgation of the law was signed by HKSAR Chief Executive Carrie Lam and published in the Gazette, according to a statement of the HKSAR government.