UK and US criticized for meddling in China affairs

China condemned foreign meddling in the country’s internal affairs on Thursday, after Britain decided to extend a broader path to citizenship for the residents of Hong Kong and the US House of Representatives passed the so-called “Hong Kong Autonomy Act.”

Chinese foreign ministry spokesman Zhao Lijian said no amount of pressure from external forces could “shake China’s determination and will to safeguard national sovereignty and Hong Kong’s prosperity and stability.”

He urged the US to abide by international law and stop interfering in Hong Kong’s affairs, and not sign the sanction bill into law.

His comments came after the US House of Representatives on Wednesday joined the Senate in approving a bill imposing sanctions on groups that “undermine the city’s autonomy” under the pretext of a national security legislation in Hong Kong.

If the bill becomes law, “China will definitely take strong countermeasures, and all consequences will be borne by the US side,” Zhao said.

Meanwhile, dozens of lawmakers protested outside the US Consulate in Hong Kong to demand that the US stop meddling. The group said it gathered 1.6 million signatures online in support of its call.

“All Chinese compatriots living in Hong Kong, including those with British National (Overseas) passport, are Chinese nationals,” he said. 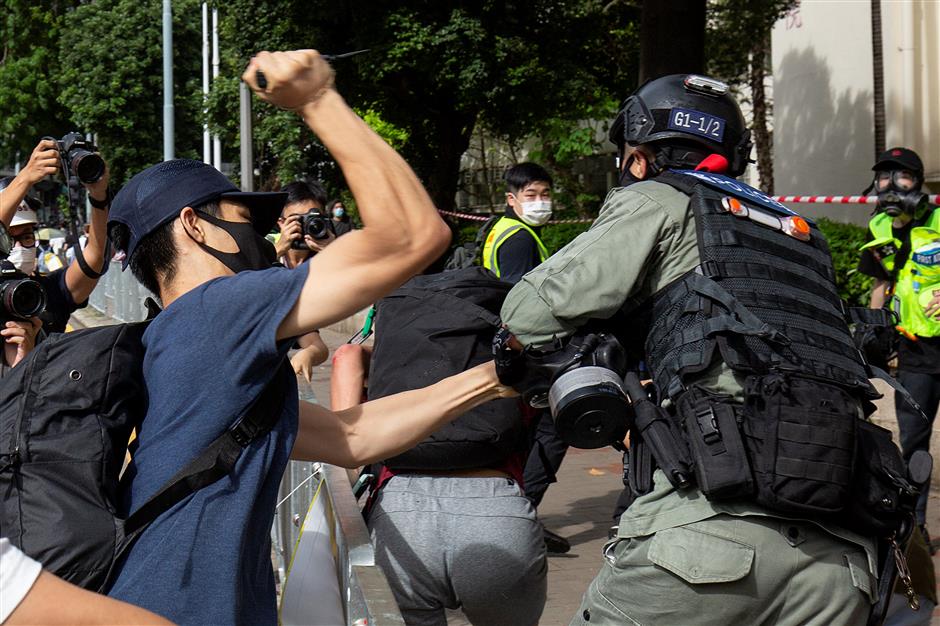 This photo taken on Wednesday shows a protester (left) using a sharp object against a Hong Kong police officer (right), who was trying to detain a man (center) during an illegal rally. The man suspected of stabbing the officer in the shoulder was arrested on board a flight that was about to take off for London.

About 370 people were arrested during and after Wednesday’s illegal assembly, including 10 on suspicion of violating the new security law.

Hong Kong police arrested a man on a London-bound flight early Thursday on suspicion of having stabbed a police officer in the arm during Wednesday’s protests.

The 24-year-old man, surnamed Wong, was arrested on a Cathay Pacific flight after police received an anonymous tip-off about his travel plans, police said.

Wong had purchased a ticket on Wednesday and boarded the flight with no check-in luggage, police said. He did not respond to the crew when they called him by name, and was not in his designated seat. Police identified him after conducting a sweep of the plane.