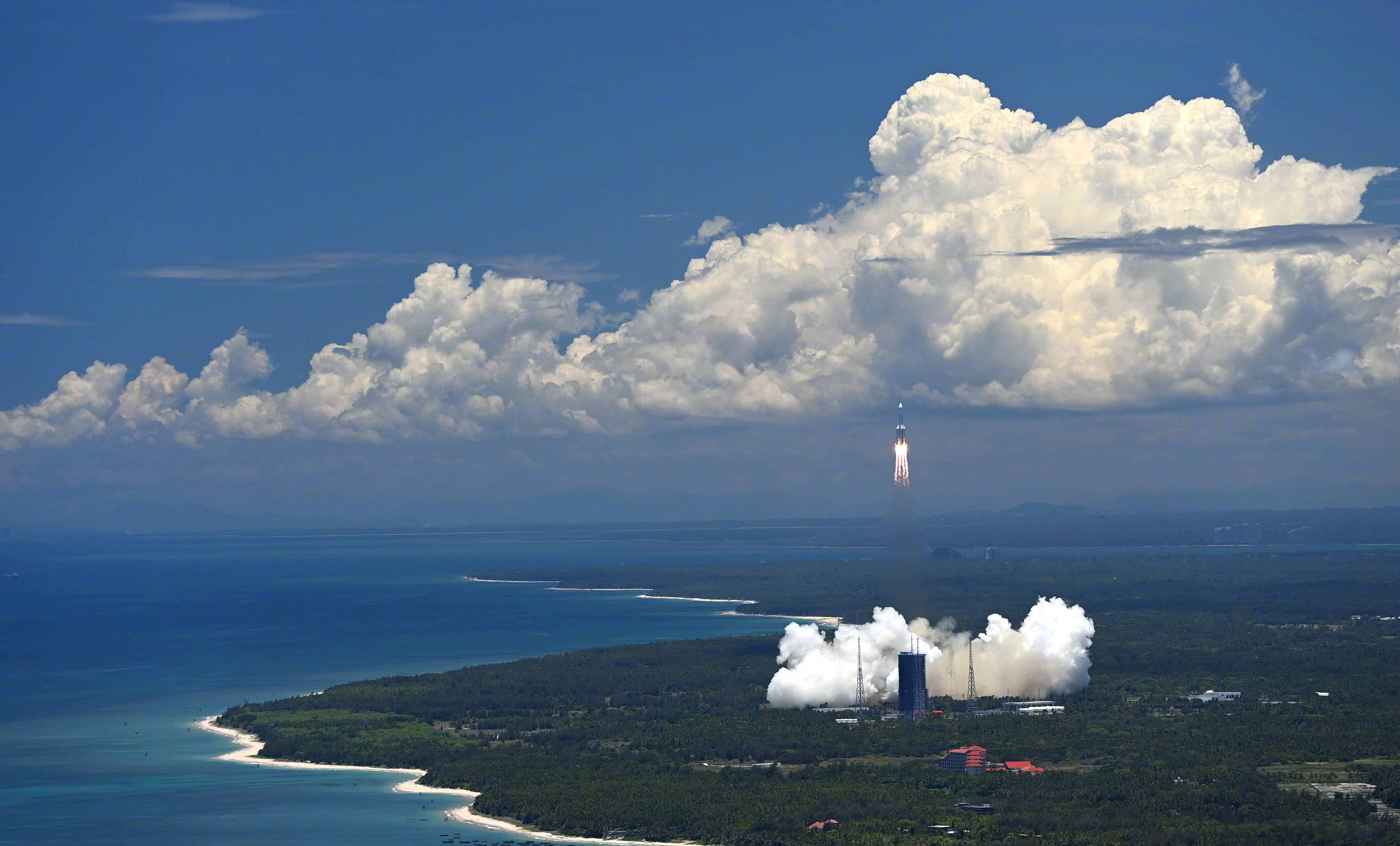 China launched a Mars probe on Thursday, designed to complete orbiting, landing and roving in one mission, taking the first step in its planetary exploration of the solar system.

A Long March-5 rocket, China's largest launch vehicle, carrying the spacecraft with a mass of about 5 tonnes, soared into the sky from the Wenchang Spacecraft Launch Site on the coast of southern China's island province of Hainan at 12:41 p.m. (Beijing Time).

About 36 minutes later, the spacecraft, including an orbiter and a rover, was sent into the Earth-Mars transfer orbit, embarking on an almost seven-month journey to the red planet, according to the China National Space Administration (CNSA).

China's first Mars mission is named Tianwen-1, which means Questions to Heaven and comes from a poem written by Qu Yuan (about 340-278 BC), one of the greatest poets of ancient China. The name signifies the Chinese nation's perseverance in pursuing truth and science and exploring nature and the universe, said the CNSA.

The successful launch of the Tianwen-1 probe is a key step for China going deeper into space, said Liu Tongjie, spokesman of China's first Mars exploration mission from the CNSA.

"The launch is only the first step of China's Mars mission, and we hope each of the many key steps of the long journey is completed successfully," said Geng Yan, an official at the Lunar Exploration and Space Program Center of the CNSA.

The key steps include slowing down when close to Mars, orbiting, separating the landing platform and the rover from the orbiter, landing softly and roving.

The spacecraft is expected to enter the orbit of Mars around February 2021. Afterwards, it will spend two to three months surveying potential landing sites using a high-resolution camera to prepare for the landing in May.

The most challenging part of the mission will be the soft landing, an autonomous process of the probe lasting seven to eight minutes. The probe will use its aerodynamic shape, parachute and retrorocket to decelerate and buffer legs to touch down, said Geng.

After the landing, the rover will be released to conduct scientific exploration with an expected lifespan of at least 90 Martian days (about three months on Earth), and the orbiter, with a design life of one Martian year (about 687 days on Earth), will relay communications for the rover while conducting its own scientific detection.

Chinese space engineers and scientists have chosen a relatively flat region in the southern part of the Utopia Planitia, a large plain, as the potential landing zone.

"The reason we selected this place is that it has both the conditions for a safe landing and scientific research value. The place has not been investigated by other countries, so the scientific data can be shared with other countries to enrich the world's understanding of Mars," Geng said.

Earlier research showed the potential landing site might be the edge of an ancient ocean or lake in the early history of Mars. Chinese scientists are looking forward to finding more evidence of water-ice.

The scientific goals include mapping the morphology and geological structure, investigating surface soil characteristics and water-ice distribution, analyzing the surface material composition, measuring the ionosphere and the characteristics of the Martian climate and environment at the surface, and perceiving the physical fields and internal structure of Mars.

Mars is at the forefront of international deep space exploration, Geng said. Mars exploration could help improve human ability to go deeper into space and provide first-hand data for major scientific research such as the origin and evolution of the solar system and life.

"Previous explorations have found evidence of water on the planet. Does this indicate there is or was life on Mars, or Mars is the past or the future of Earth? These questions are key goals of Mars research and are of great significance in understanding life and the evolution of Earth," Geng said.

Mars is also a priority target for manned landing missions other than the moon, as it can be reached using existing space capabilities and its environment is closest to Earth in the solar system, Geng said.

The mission will spur the enthusiasm of Chinese scientists to study other planets and make unique contributions to scientific progress, he said.

Pushing forward deep space exploration with Mars as the starting point could help promote China's development through innovation, he added.

Through transformation and application, these new technologies will help improve human life, and set new frontiers for social development by driving leaps in fields such as science and technology, ideology and culture, he said.

"Earth is the cradle of humanity, but we cannot stay in the cradle forever. It's important we have the ability to get out. Only by learning to fly, can we have a better future," said Li Dapeng, a spaceflight enthusiast from north China's Hebei Province.

"The mission requires tens of thousands of steps operated correctly for complete success, quite a test for engineers and technicians. It might fail on the first try, but let's hope we're lucky," Li said.

Han Hongxu, a tourist from Guangzhou, capital of south China's Guangdong Province, brought his son to Wenchang to watch the launch.

Han believed flying to Mars is the most courageous and romantic human achievement. "Like loving a person, you run to the lover, regardless of the difficulties and dangers, regardless of how far and whether you have a future together," he said.

China is a latecomer in planetary exploration. Chinese space experts do not want the goal of exploration to be reached easily. China's Mars exploration does not repeat the paths of other countries.

"We hope the mission will be innovative and help push forward scientific and technological development," Geng said.

However, the challenges are also unprecedented.

Although China has achieved a series of successes in lunar exploration with four probes to the moon, Mars poses new difficulties for Chinese spacecraft designers.

More than 40 Mars missions have been launched since the 1960s, but only about half have succeeded. The success rate for landing is even lower, and only the United States has succeeded in a soft landing on Mars.

"We only have a limited understanding of Mars. There are still many uncertainties about the environment and great risks," said Geng.

If China can succeed in orbiting, landing and roving with Tianwen-1, it will take the challenge of collecting and bringing back samples in the next Mars mission, as well as exploring asteroids and the Jovian system, Geng added.

The Mars mission has attracted active participation of non-governmental research agencies, with more than 600 domestic organizations joining the development of the probe system alone.

The Hong Kong Polytechnic University and Macao University of Science and Technology helped develop cameras for the project, and scientists from Hong Kong and Macao were also involved in the scientific research.

Extensive international cooperation has also been carried out.

China works with the European Space Agency and Argentina in the mission's measurement and control, and with France and Austria in the calibration of multiple payloads and data analysis.

"Scientists from all sides have been in close contact, making active preparations for early and quick research results," Geng said.

Norbert Paluch, space counselor of the French Embassy in China, said that deep space exploration is one of the biggest challenges for mankind, and it makes sense to do it together. He believes everybody on Earth will learn a lot from what China will discover.